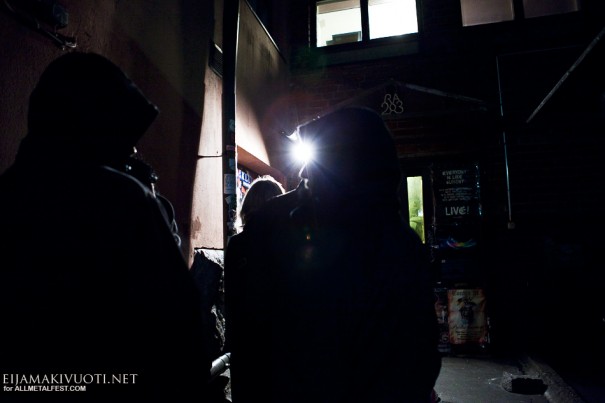 It seems to become some kind of basic setting when heading to a black metal concert at Kuudes Linja in Helsinki that the night is lit by an almost full moon because on Wednesday 9 th November the full moon was only one night away and was brightening the early winter night to the Wolves in the Throne Room concert. It was the second concert in Finland, the first one having taken place the night before in Tampere. Both were part of the tour that is following the release of their latest album Celestial Lineage that came out in September of this year. WITTR as they are often called are a band that has been hyped lately with very positive feedback both for their records and live shows which of course in itself is not a bad thing but it was a reason why expectations were running high, also due to they themselves claiming to be foremost a live band. This concert was a chance to build an opinion by yourself and an opportunity that could not be passed up because it was very likely the last chance to see them as WITTR since the Weaver brothers had announced it would be the last WITTR tour. Yours truly was especially curious if they would manage to transfer the density of the new album to the stage, and live up to their own expectations of painting pictures with their music. But we shall see about that a bit later because upon arriving at Kuudes Linja there was once again a queue of metal heads waiting and freezing in front of the door which should have been opened already. 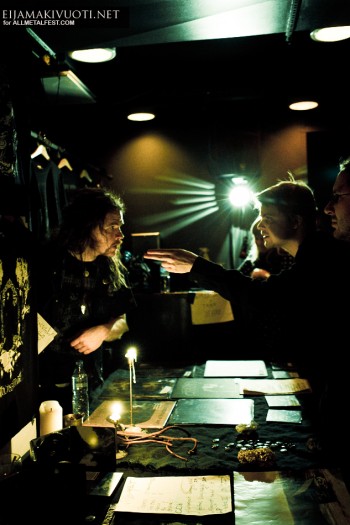 Kuudes Linja is not a typical metal place despite them regularly hosting metal concerts, usually with more alternative metal bands such as Negura Bunget or now Wolves in the Throne Room. The venue positions itself as an underground club that offers a wide variety of national and international artists and addresses a crowd in the age range of 20 to 35. On weekends it is usually taken over by a hipster crowd. As Sanna Jaakkola from the Kuudes Linja team explains it is all about the music and not limited to any specific scene. She also points out that there never has been a complaint from the metal crowd about the more club or lounge like interior because it is a versatile space that can adapt to any style of music. Yours truly has only been there for metal concerts but it is correct that the venue always worked whatever the style of the band or the music was. However, you can see the difference to other bars and clubs in the area as well as to other metal venues in the prices for drinks which are not too cheap with beers and ciders ranging between 5€ and 6€. But then on the other hand it is the only venue in the neighborhood that is opened until 4 a.m. which is the longest that any place is allowed to be open in Finland, as Sanna points out. Usually in Kallio places close at 2.a.m. The location is close to the center along Hämeentie, which is one of Helsinki’s main streets but the entrance is hidden in a backyard that is surrounded by tall buildings all around. Tall buildings in Helsinki are not skyscrapers or anything of the like but for example seven storey high apartment houses that in the Kallio district where Kuudes Linja is located usually were built in the 1950ies as housing for factory workers and their families. 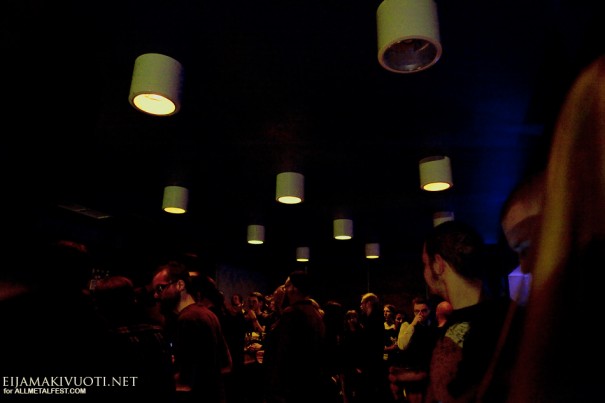 With 15 minutes delay the doors finally opened but it took quite some time for everyone to get in as the security only let a few people in at the time to keep the warmth in. Also, there is not much space at the entrance and showing the ticket as well as paying the wardrobe fee (2,50€) and getting rid of the slowly but surely necessary winter clothes takes its time. After finally having managed all that it was up the stairs towards the warmth and the actual place. Upon arrival the visitor was greeted by a venue with an atmosphere already set: The lights were dimmed, the air filled with the odor of olibanum and for once the music played by the venue suited theevenings’ programme. How many times do they play some music that absolutely not at all fits the music of the bands that are playing? Yours truly has experienced such horrendous things as having to listen to David Hasselhoff between two black metal gigs, but maybe that was an intentional joke. However, it is horrible when the music before or between bands ruins the atmosphere so it was much appreciated that someone seemed to have put some thought in what background music to play, even though it was ruined a bit in the end when they played an old Theatre of Tragedy song shortly before the first bands started. The stage was already fully decorated with black banners that displayed a full moon lit forest with various animals in it such as a wolf, an owl, a deer and a crane and the microphone was decorated with two animal skulls. Since the lighting was held mostly in a gloomy blue and the paintings on the banners as well as the skulls were white a quite beautiful picture was created. 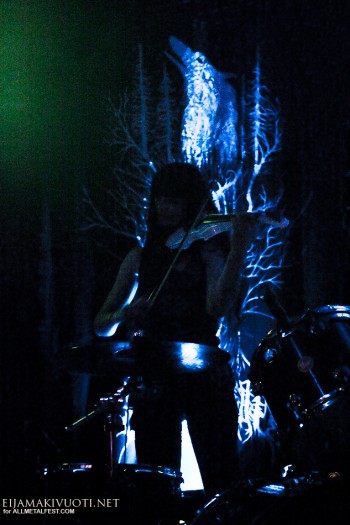 A small crowd was already around for Wolvserpent, a duo from Idaho that plays a mixture of Ambient, Doom and Drone. While waiting one could take a look at the merchandise table which was the biggest one yours truly so far has seen at Kuudes Linja and it was beautifully decorated with candles, twigs and flowers. The prices were also surprisingly fair for most of the items: you can’t complain when shirts cost 15€ and CD’s from 12€ to 25€. When Wolvserpent finally got on the only candle lit stage about 20 minutes late a physical concert experience began: A deep drone could be felt in the stomach while the bass drum, played by Brittany McConnell was shaking the roots of your hair. Besides the drums she also was playing the violin while Blake Green was playing the guitar, singing and operating the electronics. They only played two songs but each was about 20 minutes long. It took some time to get into the music but because it was an experience for body, ears, eyes, nose and mind you got sucked into it after a while. Brittany’s slim arms on the drums were flying around like tentacles detached from her body despite the slow rhythms. The music gave a feeling of being part of a pulsing organ and at some point it felt like being on a ship that is caught in the ice of the frozen sea with nothing and no one around in the arctic winter night. The audience didn’t show much reaction but you could see interested faces and the one or other foot tapping and head nodding. Not having known Wolvserpent before it was a very interesting gig of a duo that had a special stage presence despite putting on a minimalistic but thought-out show. 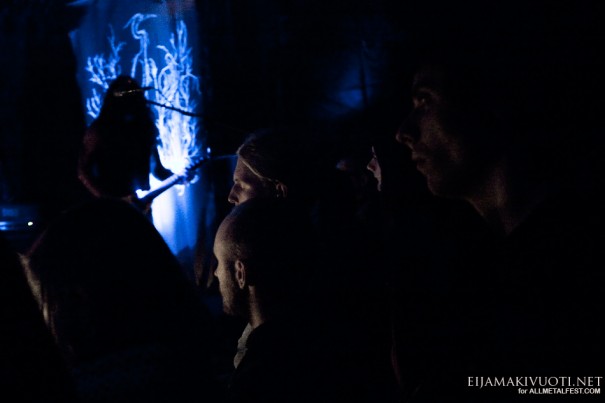 Already while Wolvserpent were playing a larger crowd had been gathering and during the break the whole place filled up. It seemed as if there was a dress code that could be called hipster black metal: instead of black skinny jeans or leather pants, patron belts, band shirts and long hair many people in the audience were wearing blue jeans, sneakers, a lumberjack shirt and glasses with preferably thick black frames on a bald head. When WITTR, this time live being the brothers Andrew und Nathan Weaver on the guitars and their drummer, finally got on stage it was difficult to find a good place to watch if you did not want to be crammed into the middle of the crowd. That is one negative aspect of the way Kuudes Linja is structured with the lounge and bar area on one side and the stage area on the other, the two being separated by a wall with two entrances/exists. So if you are on the bar side you can’t see the stage unless you stand at the entrance close to the stage. 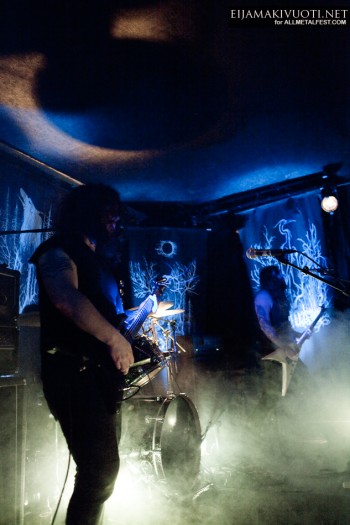 On stage there was not more light than before from the projectors but they had put up some storm lamps on the floor and during the whole concert fog was blown on stage so again a very atmospheric set was created. The only other and also brightest sources of light were the blue guitar lights that the Weaver brothers had attached to their instruments. With the first tones of Thuja Magus Imperium which is the opener of the latest album almost immediately the head banging started on and off stage. Due to the place being so crowded and people walking around, squeezing through trying to get a good place to watch and talking next to your ear it took some time to get in the mood of the concert but eventually the density of the atmosphere and the intensity of the music got to you. WITTR have been called hippie black metal but what they do on stage is anything but hippie. It was black metal at its best from the sound to the emotions to the composure of the band with them being absorbed by the music and the minimal contact with the audience. It was dark, raw, delicate and beautiful all at the same time. Over 70 minutes they played a mixture of new and old songs, focusing on the new tracks from Celestial Lineage and it seemed the longer they played the more intense it got until finally you completely surrendered to the music and the atmosphere. Thus, the applause was plenty and loud. 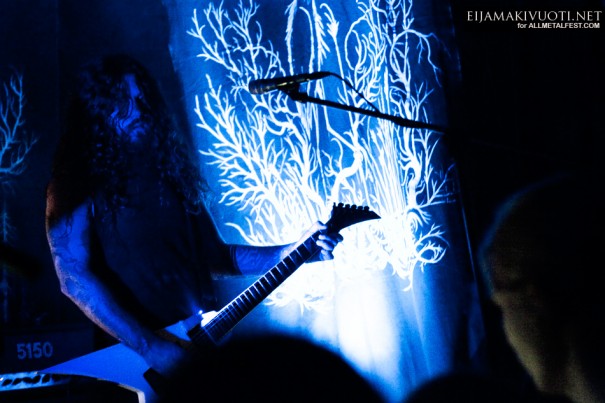 Towards the end of the gig the crowd had thinned out a bit since it was a week night and already after midnight but there were still more than enough people to shout and clap for an encore after the last song ended. But the show was over for good and there was nothing to complain about despite the late door opening and accordingly delayed schedule. WITTR definitely are a live band and they certainly deserve the positive feedback they have gotten over the last years. It was a good concert with two quite different bands but even though they were a very good match as they both created a unique atmosphere and delivered the kind of concert experience you don’t get often enough.