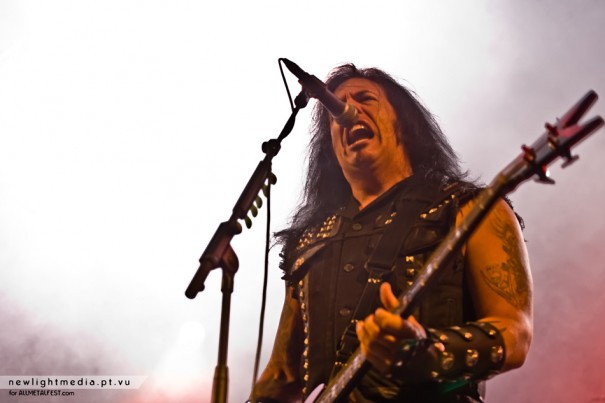 The third edition of Vagos Open Air occurred on August 5th and 6th and it was the best one since the debut in 2009. This festival takes place in Calvão, Vagos, in the north/center side of Portugal and is surrounded by forest. However, the urban centers are not too far away, because Vagos, Ílhavo and Aveiro (the most important city of the region) are only a few kilometers of distance. Four nice beaches are also near the festival place which is awesome, because – as we know – Vagos Open Air is held during the summer time.

The access to the festival is also very good! One of the most important highways of the country and of the region has its exit really close to the place where the shows happen. For the people who arrive by train, the Vagos Open Air organization provides a bus in the Aveiro train station and in 30 minutes the metalheads are in the field.

The shows are held in a soccer field, not a real stadium, but a humble field where an amateur team from Calvão plays its championship every year. As I said before, the place is surrounded by forest where the metallers camp and fraternize.

Food and drinks are over the place and nobody starves nor gets thirsty. The great attraction is the caldo verde soup and the bifanas with bread cooked by the Grupo Desportivo de Calvão volunteers.

But let’s talk about the concerts…

Revolution Within is a Thrash Metal band from the Aveiro region and they are well known by the metal guys of the district. They are a humble band who just wants to enjoy their time and show their music to the public. Of course, Revolution Within was not the main attraction of the festival, but Raça, the frontman, could demand a “wall of death” and the audience answered him.

Crushing Sun was the 2010 sensation in the Portuguese underground and they earned their presence through a contest voted by people. Fair enough, I say. “TAO” is the latest album released by them and the fans are always pleased to see them live. They are a competent band, but I feel this band works better in a closed venue.

Essence, from Denmark, was the first foreign band to set foot on the Vagos Open Air 2011. They may be a young band, but their straightforward Thrash Metal is quite mature and the first true headbangings were seen! The crowd was astonished when Essence performed a wild cover of “Raining Blood”, an original of Slayer. 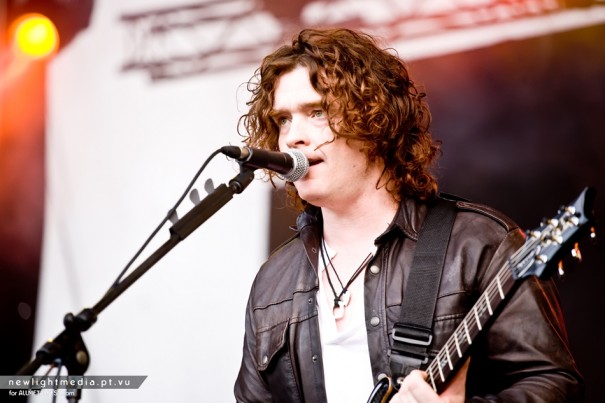 Everything was running well until the Anathema show, but the electric power went down a few times. The band faced it with professionalism, but the audience started to feel uncomfortable. Anathema is very familiar with Portugal and they have a huge legion of fans in this country. The set list was essentially composed by the “We’re Here Because We’re Here” record, yet they pleased the people with songs like “Deep”, “A Natural Disaster” and “Fragile Dreams”. The keyboardist for this show was Daniel Cardoso, a famous Portuguese musician and producer. 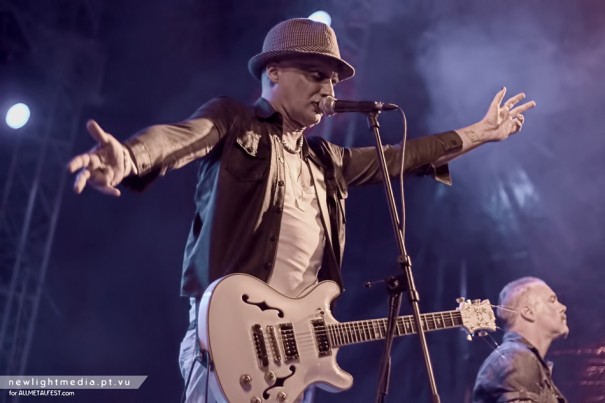 After an hour of delay and after some whistles from the unhappy crowd, Tiamat took the stage and the best sound of the evening was heard during their performance. It was visible that a portion of the audience was unfamiliar with Tiamat and it was truly a quite surprise for me. I had heard a few guys complaining about their presence on stage, but it is their way: a band that does not talk too much, but performs the songs perfectly. “Whatever That Hurts”, “Vote For Love” and “Sleeping Beauty” were the main attractions of this Tiamat concert. Unfortunately, for me, only “Until The Hellbounds Sleep Again” was played from their most recent record, “Amanethes”. 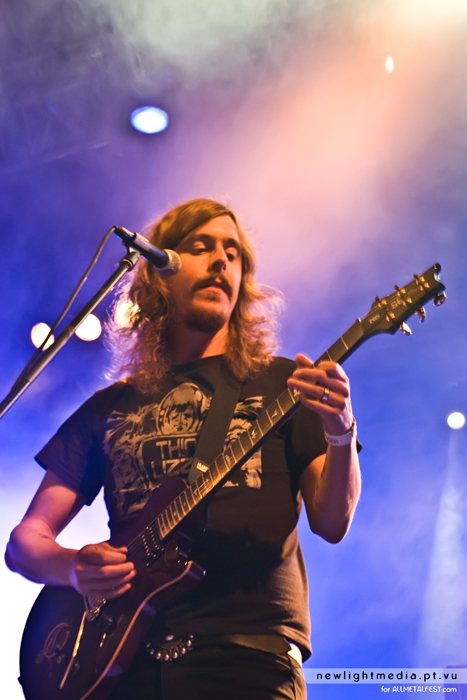 Opeth was the awaited act of the festival first day and with them also came the rain, not too much, but some drops were felt. The rain was not strong enough to cast out the crowd and thousands of people remained faithful to one of the most beloved bands by Portuguese metal fans. The expectation was huge, because I had heard some conversations about the new song, “The Devil’s Orchard”, which Opeth did not played, as I had foresaw. They begun with “The Grand Conjuration” followed by the oldie “Face Of Melinda”. “The Lotus Eater” brought us back to the present and then Opeth pleased us – specially the female crowd, I guess – with “In My Time Of Need”. Then, “Master’s Apprentices” was heard and the “Blackwater Park” record was not forgotten, as “The Drappery Falls” was played. “Hex Omega” had announced the end of the show, but the band returned to stage for an encore. When they came back, Åkerfeldt first teased the audience with a bit of the famous “Welcome To The Jungle” (Guns’n’Roses) and for the delight of thousands, Opeth finished the evening with the “Deliverance” song. One extra point goes to the guitar solo executed by Fredrik Åkesson and another one goes to the usual funny sense of humor of Mikael Åkerfeldt.

The rain and the heavy clouds remained all night until the next morning, but the Sun smiled to Vagos Open Air when the second day begun with another two Portuguese acts: We Are The Damned and Malevolence.

Well, what can I say about We Are The Damned? A band that in a live act is different from the studio and a vocalist/frontman with a really bad and childish attitude. It is good to highlight the Portuguese bands, but not that way despising the foreign bands and it was also not nice of him to “cry like a baby” on stage about their video-clip that did not airplayed on TV. Finally, the band said farewell to Vagos Open Air in an unfortunate way, like «if you don’t want to listen, don’t listen!». Too bad for a band that was representing the Portuguese scene at the biggest Metal fest in Portugal.

Malevolence was the second band to set foot on the stage and more metal people were seen to come. They are a cult band of the underground and they went through a long hiatus; Vagos Open Air was the perfect way to welcome them back. They play old-school Death/Thrash Metal and the young guys in the front spun their heads along with the guitar riffs. It is nice to see that an old band still can move the teenagers! Malevolence also had time to show a new song and I think the frontman got carried away about glorifying too much the Lusitanian pride and it became a little bit ridiculous. For a band that cares a lot about our roots, I guess they could sing more in Portuguese than in English, but it is an extra and personal opinion. In a final note, the bassist was Aires Pereira, from Moonspell.

Then, followed Kalmah for the first time in Portugal and, amazingly, the audience that remained at the security rail near the stage started to call them and scream «Kalmah! Kalmah!», even when they were only setting up everything for the upcoming concert. The band was in heaven while the first ranks of crowd were shouting their name and, so, they started the show with “Hook The Monster”. This Finnish band that, without doubt has Children of Bodom in their veins, focused on the “12 Gauge” album without forgetting “The Black Waltz” or the “Swamplord” record, with which they finished the gig with the “Hades” song. 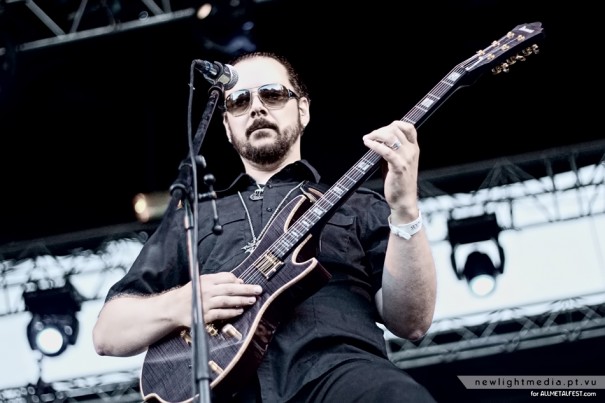 The first day had more attendance than the second one, but with Ihsahn the festival field was fuller than a few hours before. It was also Ihsahn first time in Portugal and everybody was eager to attend his show. Accompanying him was the guest band Leprous and everybody could see a master amidst the youngsters. He started the show with “The Barren Lands” and “A Grave Inversed”, the two tracks that open his latest record, “After”. I dare to say that the beginning of the concert was little bit weird, it seems like they were just warming up, but everything flowed naturally and, of course, it was a great gig. The “AngL” record was also recalled with songs like “Scarab”, “Emancipation” and “Unhealer” – this last one had the keyboardist singing along with Ihsahn in the parts in the album that are intended for Mikael Åkerfeldt. Emperor was not forgotten and two songs were played for the delight of the fervent fans – the songs were “The Tong Of Fire” and “Thus Spake The Nighspirit”.
“On The Shores” brought us back to the actual times and thus the show was finished as the metal fanatics could rest a little because of the intensive mosh-pit. 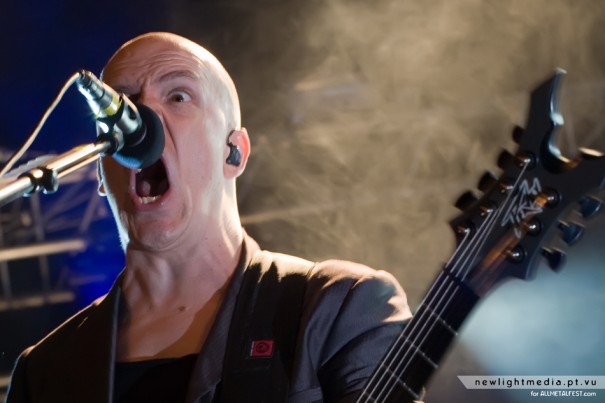 This second day of festival was like the premiere night of cinemas. It was also the first time in Portugal for Devin Towsend. And what a show it was! This Canadian fellow is, indeed, the face of many characters – Devin can personify several individuals during each song and it seems like every song has a story to tell and a new character to show up. “Addicted!” and “Supercrush!” recalled the 2009 record, “Addicted”, and thus the gig was unleashed. Every project created by Devin Towsend was remembered and songs like “By Your Command”, “Pixillate” or “Color Your World” were played. Kudos for the band and for the crowd when “By Your Command” was heard, the Portuguese fans are crazy about Ziltoid. The great moment of the gig was when Ihsahn was invited to join the band and sing “Juular” – the more insane and best scream of all the festival was ignited by these two gentlemen. There was also time for an encore consisting of three songs: “Color Your World” (that I referred before), “The Greys” and “Deep Peace”. Along with their performance, images and special effects were shown in the two screens beside the stage. It was the best show of this 2011 edition. 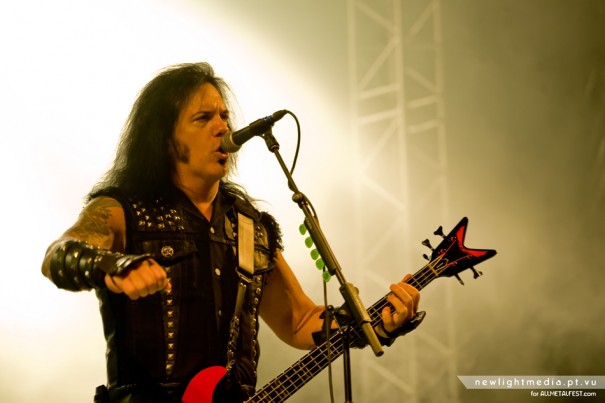 Finally, it was time for the Death Metal masters: Morbid Angel. Everybody was tired – too much mosh-pit and too much booze -, but the audience stood firm to welcome this timeless quartet. Seventeen unstoppable songs were executed in a merciless manner. They started with unforgettable hymns, like: “Immortal Rites”, “Rapture”, “Maze Of Torment” or “Sworn To The Black.” During an evening in which David Vincent was not too much inspired – always talking about the stars and the sky -, the new songs had their time: “Existo Vulgore”, “Nevermore” and “Morbid” were the heard anthems. The audience was not too excited for that, but putting it in other words: these songs don’t sound so bad in a live act, just are slower than the usual Morbid Angel. Ahead, Trey Azaghoth dazzled everybody with an extensive guitar solo after “Chapel Of Ghouls” song – just amazing and breath taking. Almost every record was recalled and I just want to recall the “God Of Emptiness” song, near the end of the gig. I also want to express myself, saying that Tim Young is the best drummer who ever played at Vagos Open Air festival – he is fast, furious and the finest performer I have ever seen.

As I said in the beginning of the report, this third edition was the best of all the three, since 2009. A lot of things were improved: more bars, more food stations and, of course, the hydromel was there to sweeten the tongues. In other way, the merchandise and the DJ side suffered a setback: in the first two festival there was a huge tent, but this year there was only little merchandise stands, a little stage to the DJ in between the stands and the people was confined like can meat. Another thing the organization did not improve is the press treatment: the journalists and reporters are not priorities at the entrance of the festival and there is no special place to interview the bands.