UK DEATHFEST will disturb Leeds University Union on Sunday May 3rd with an extreme bill hosting the likes of Akercocke, The Rotted and Dam.

DEATHFEST fans will be treated to a special one-two: legends VADER will fly in for a rare headline set while grind monsters LENG TCH’E invade for their first ever UK shows.

From the team behind Damnation Festival, UK Deathfest will showcase the country’s ugliest metal on a 16-band, two-stage bill that will wreak havoc on your ears.

Festival organiser Gavin McInally says: “Following the continued success of our Terrorizer Stage at Damnation Festival over the past four years, we felt it was time to give some the UK’s most brutal talent the main stage to themselves. 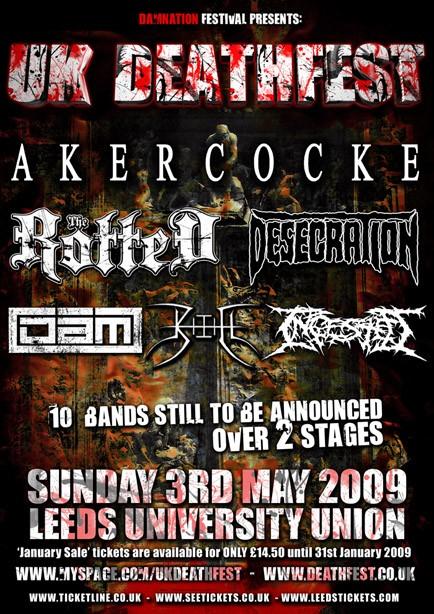 “The first of hopefully many UK Deathfest events will feature two stages; a main stage of predominantly death metal and an alternative second stage crammed with doom, sludge, grind and even some thrash if we can squeeze it in.”