SWR Barroselas Metalfest XV will take place in the small village of Barroselas, in the north of Portugal on April 26-30, 2012.

Immortal, Candlemass and Gorod are among the bands that will perform at the SWR Barroselas Metalfest XV festival. 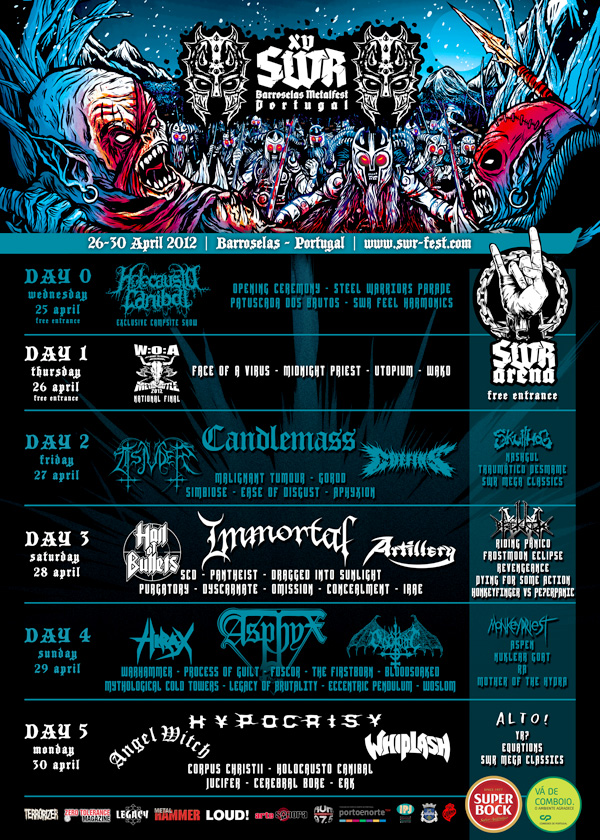 SWR barroselas metalfest XV, set to take place from April 26th to 30th 2012 at the small village of Barroselas, in the north of Portugal, gets ready to celebrate the fifteenth anniversary with a five days special edition.

Norwegian black metallers Immortal are expected to make history on the first stage of SWR Barroselas Metalfest XV presenting an exclusive show built at the own image of Abbath’s Nordic legions. Suede’s doom metal classics Candlemass are also among the greatest attractions in this special anniversary edition of the festival.

North-american thrashers Whiplash and Hirax, deathsters Asphyx, Norwegian satanic black metallers Tsjuder, grind & roll freaks Malignant Tumour or Japanese doomsters Coffins are some of the greatest highlights in a festival that welcomes more than fifty acts from all over the world.

With names like Napalm Death, Brujeria, Katatonia or Kreator on its history, SWR Barroselas Metalfest XV features two indoor stages and an outside free entrance area featuring some performances and concerts. A forest campsite with toilets and hot shower facilities opens for free usage during the entire festival.