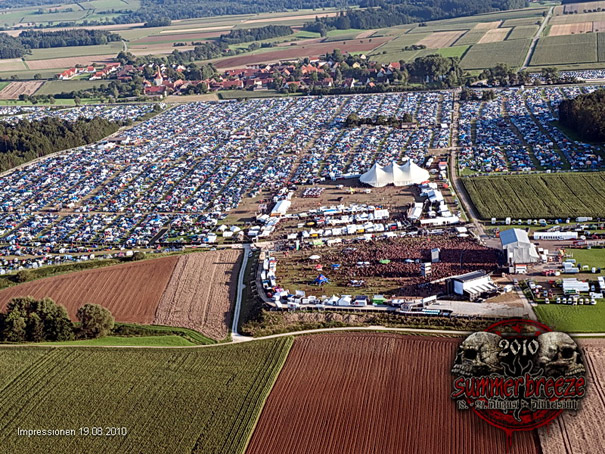 Much like most German festivals, Summer Breeze is held virtually in the middle of nowhere, a few hundred kilometers from bigger cities like Frankfurt, Nürnberg and Stuttgart, near the small town of Dinkelsbühl. Thus most festival visitors arrive on site by car, which can be conveniently parked on the large camping area next to your own tent. There is a ban of glass on the camping grounds, but alcohol gets a thumbs up from the security guards also on the festival site. You may bring your own drinks inside the festival area in a small plastic bottle or in a plastic Summer Breeze mug.

Summer Breeze has been going strong since 1997, and it’s definitely one of Germany’s most important annual metal festivals with a faithful following – in the recent years the festival has been sold out already in the spring, as German metalheads together with Austrians and Swiss from the neighboring countries keep coming back for the jolly atmosphere year after year. Summer Breeze runs from Wednesday to Saturday, with Wednesday being more or less a warm up day until the festival kicks off for real. 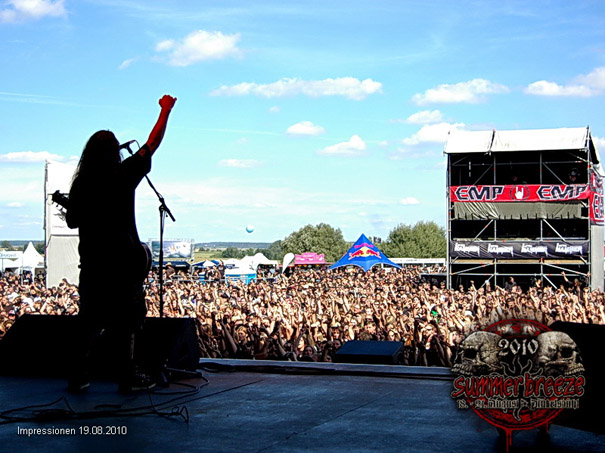 The still-unsigned Grailknights had been moved from the minimal Camel Stage to the Party Tent stage due to some changes in the schedule. You would think superhero metal wouldn’t be popular even in Germany, but their cheesy power metal and ridiculous costumes were the demo of the month in Metal Hammer for a reason. With their songs finetuned to a live setting with easy to follow sing-a-long parts, the ‘Knights got the packed tent going right from the start. After watching a several thousand strong crowd chant in extacy for grown up men in costumes supposedly ‘questing for the holy grail’, one could only shake his head in sheer disbelief – the odds are we’ll have to hear from these tools again. 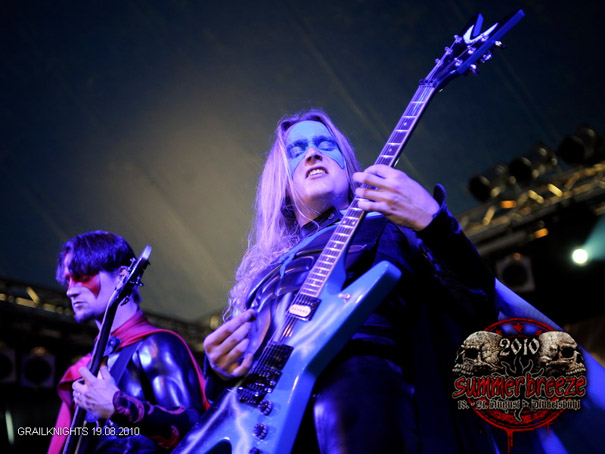 After The 69 Eyes finished their goth rock set on one of the two main stages, next up on the party stage was a triple blow of three fellow Finnish bands. The young blokes from Tracedawn make up for the lack of originality in their music with twice the talent and showmanship, which makes them a respectable embassador of sheer Finnish quality metal. Set closer “Without Walls” is a small time hit of some sort which shows that these guys have an enormous amount of potential waiting to be unleashed. 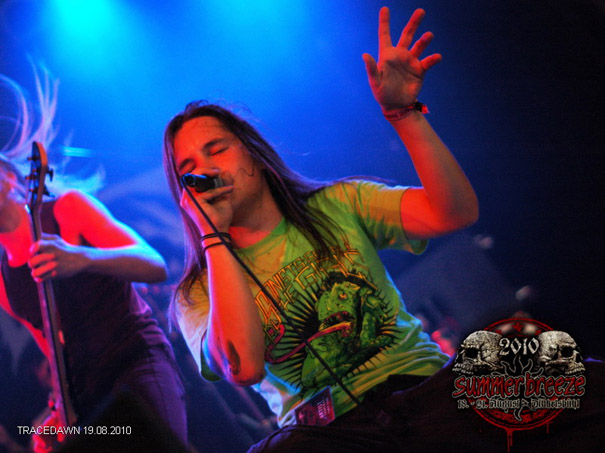 Insomnium and Swallow The Sun both represent a more atmospheric side of Finnish metal. While Insomnium‘s show leaned more on aggression and melody with the likes of “The Killjoy” and “Mortal Share”, Swallow The Sun took the tempo down with more gloomy tracks such as “Plague Of Butterflies” and “These Hours Of Despair”. Both good bands, although a little too melancholic for a sunny festival, so the organizators deserve a thumbs up for booking them to the party tent. 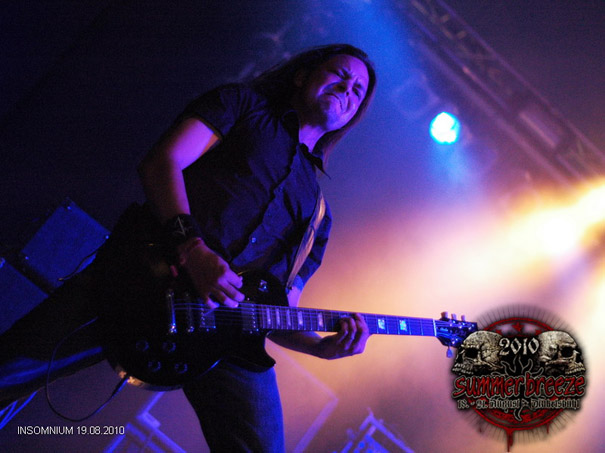 Several stands near the festival entrance offered a wide selection of clothing and every kind of related accessory you could think of from drinking horns to bracelets and jewelry. Piercing and tattoos were also no problem, if you wanted to get yourself something that would remind you the next day for why you shouldn’t drink so much. Reasonably priced festival food was available from baguettes and burgers to thai food, and getting your worst hunger away did not cost you more than five euros – not bad at all.

Obituary was clearly one of the most expected performers of the day, as one of the most vicious moshpit of the weekend was seen. Behemoth had unfortunately cancelled Summer Breeze due to singer-vocalist Nergal‘s diagnosed leukemia, and thus Raised Fist had been moved to the main stage. Even if you’re not a fan of hardcore, you just have to love a band that won’t stay a second still on the stage. 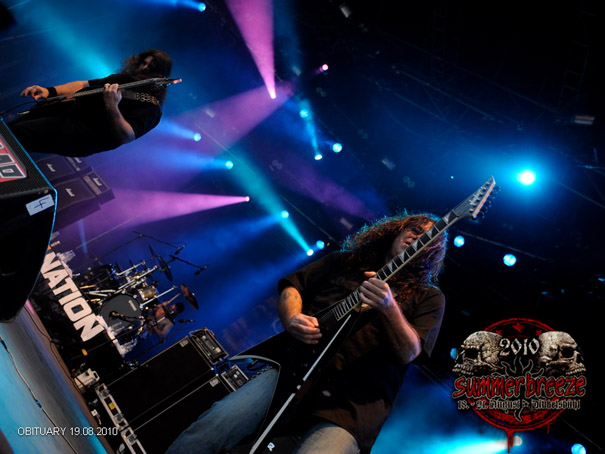 I probably couldn’t come up with a worse name for a band than We Butter The Bread With Butter even if I tried really,really hard. No wonder humorous electro-deathcore is the name of the game here. What these humour bands don’t get,is that it’s not really funny if you’re not serious. I mean, try Manowar. Now that’s funny. Anyway, we get five breakdowns a minute and totally out of place keyboards all over the place. Thanks and bye, party tent! 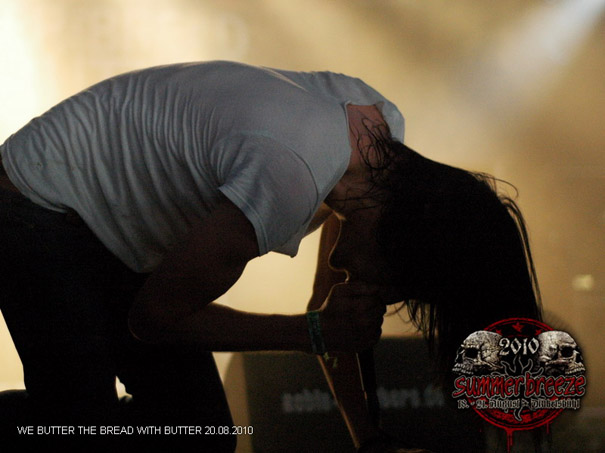 The war-painted Finns from Ensiferum played a solid show at the mainstage for a large crowd. It looked a little effortless, but the crowd was loving every minute of it. Somewhat newly joined bass virtuoso Sami Hinkka has clearly brought some new life to the band, and their latest album “From Afar” is actually not too bad after “Victory Songs” which didn’t do too much for me. “Twilight Tavern” is an instant live favorite and “Token Of Time” and “Iron” just hits home every time. 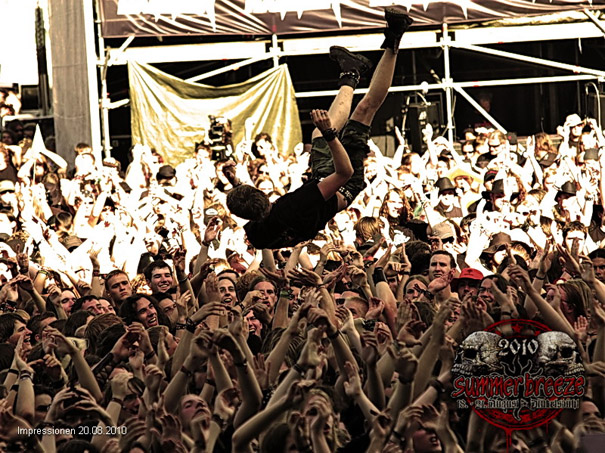 There was no separate limited bar area on Summer Breeze, so if you don’t like to sit down in the beer garden, you can also buy beer from a number of bar desks near the main stage and enjoy a cold one wherever you want as you watch the bands. A 0,4L mug of beer was priced at three euros, and drinks like Cuba Libres and Piña Coladas from the Brazil bar were around five euros. The drinks came with a 50 cent deposit for the mug to make sure the festival site stays clean. The weather was steaming hot for the duration of the whole weekend, but gladly there was showers available for a fee of 2,50 eur. 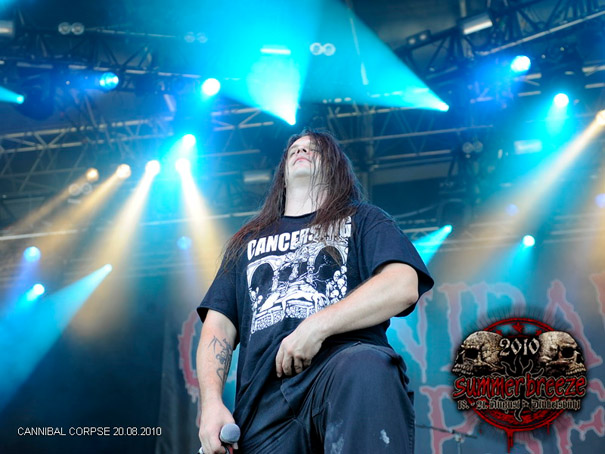 Dutch Hail Of Bullets is one of the most promising to surface in the last few years. Led by Asphyx frontman Martin van Drunen, Hail Of Bullets played a good deal of crushing songs from their World War themed death metal debut album “..Of Frost And War”. Mid-way through their intense set, the band showcased some new material in the form of “Operation Z”, a track that is planned for the upcoming studio outing number two. Needless to say, it was brutal. 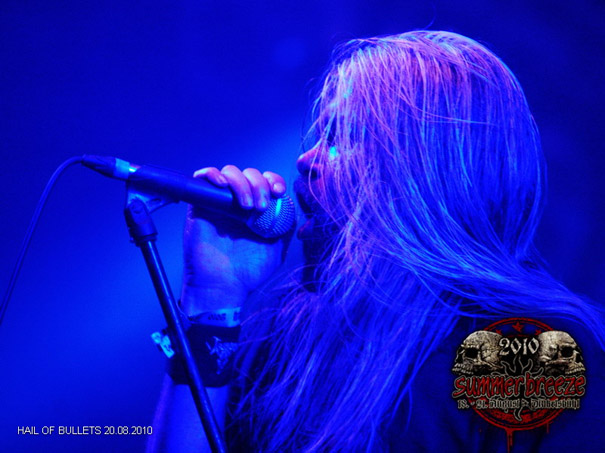 Van Canto certainly had the most unique sound of the weekend. The heavy metal a capella group was a fairly good start for the day. “Master Of Puppets”, “Fear Of The Dark” and Blind Guardians‘ “Bard’s Song” were safe choices to get the crowd warm. Van Canto had a 40 minute slot, which was already pushing it. Being able to do metal songs a capella is impressive, but hardly entertaining in the long term as “the joke” gets old real quick. 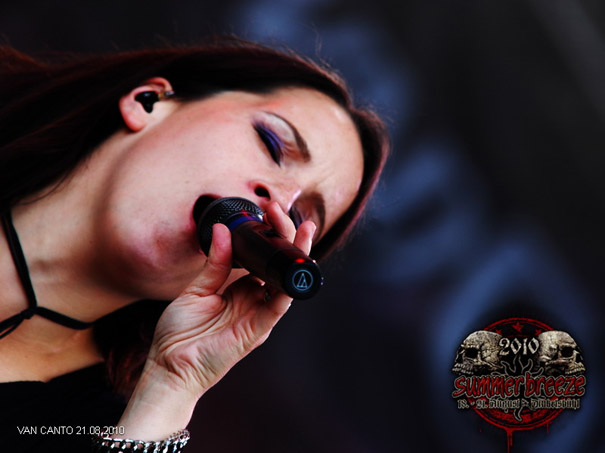 The parties in the camping area were running non-stop during the weekend in good spirits. As always, some people had seen a lot of trouble and dragged their ghetto blasters, grills and even sofas along. Some kept themselves entertained with some drunken football, while others had been a little more creative and set up a dozen meter long waterslide with a bunch of plastic bags and a lot of soap. Smart!

Children Of Bodom had this year’s headliner slot, and they took to the stage to the intro theme of “The Naked Gun” and got the show rolling with “Follow The Reaper”. COB is a solid live band, but their experience of touring the world left and right since they were barely 18-years-old is not only showing as expertise, but to a degree also in dull routine. Their 75-minute set included neither any songs they hadn’t played a million times before in the recent years, nor any speeches between the songs outside the only five that Alexi Laiho knows. Yes, the band does play well, and they’re not all too serious but can let loose and jam to Lady Gaga‘s Alejandro, Bon Jovi‘s Runaway and Van Halen‘s jump on the main stage of an extreme metal festival, but with a little more effort they could have offered a more memorable show. 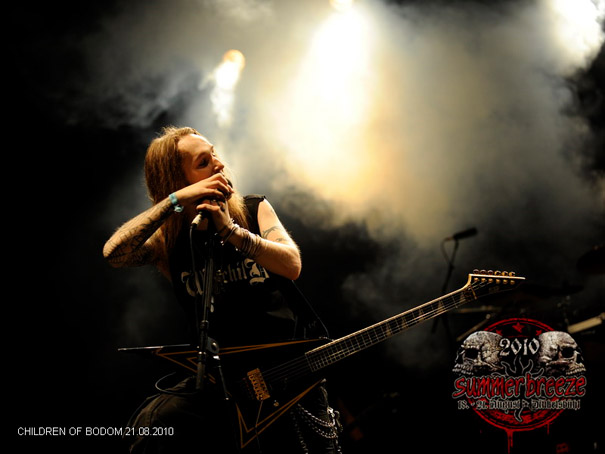 Swedish death metal legends The Crown has re-united since their 2003 break-up and are now planning a new album release this fall. Jonas Stålhammer of God Macabre fame has boldy taken up the vocal duties regardless of the gigantic proportions of the boots he has to fill. While he’s no Johan Lindstrand and certainly no Tomas Lindberg, Jonas has a fairly good voice and sits in the band fine. “Deathexplosion” opened the gig followed by absolute death metal classics “Executioner – Slayer Of The Light”, “Under The Whip”, “Back From The Grave”, “Crowned In Terror” and finally “Total Satan”. Surprisingly enough, the band’s performance was a lot more energetic than in some of the shows in the beginning of the millennium; it looked like the break had done its job, and the guys are really enjoying to be on the stage again. The turnout was sadly rather poor, perhaps due to the 1:15 am playing time, but this long time fan can die happy after hearing live some of the most bone crunching tracks in the history of Swedish death metal. 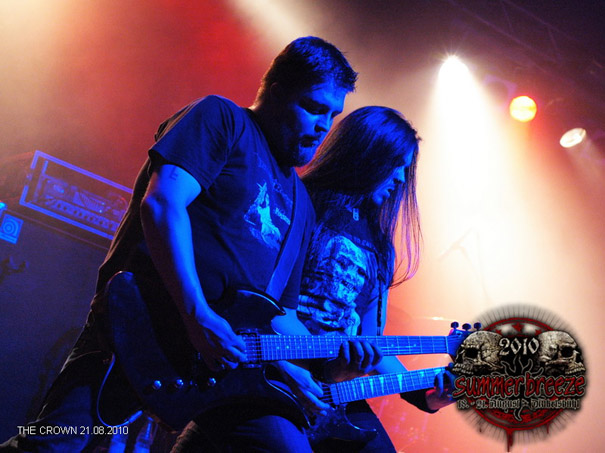 All in all Summer Breeze proved to be without a doubt one of the better European metal festivals, and it’s easy to predict a bright future and many, many great Summer Breezes to come. They’ve managed to nail down the perfect balance of things: it boasts an impressive lineup for all tastes at an affordable price of just 66 EUR per ticket incl. camping, yet it’s nowhere near as crammed up as Wacken, Graspop and the like. 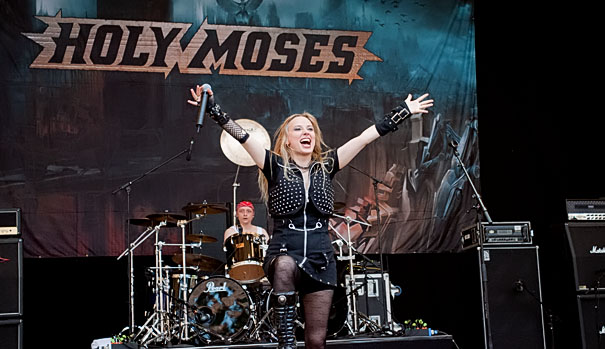