For some reason Sólstafir always play on a rainy Thursdays at the Nosturi (meaning “crane”) when they play a headliner show in Helsinki. The last time they did that in 2009 it was a Thursday in October and there were only a handful people attending. So it would be interesting to see how this gig would be as after their 2009 album “Köld” and the 2011 album “Svartir Sandar” they have become very popular. This was the fourth time yours truly would see them after an amazing show at Jalometalli Festival in Oulu in 2009, a great show at Nosturi in October 2009 and a solid but short show at Metalheim Festival also in Nosturi in October 2010. So after a one year of not seeing them live it this was the third time round to see them at Nosturi with their incredible new album “Svartir Sandar”. 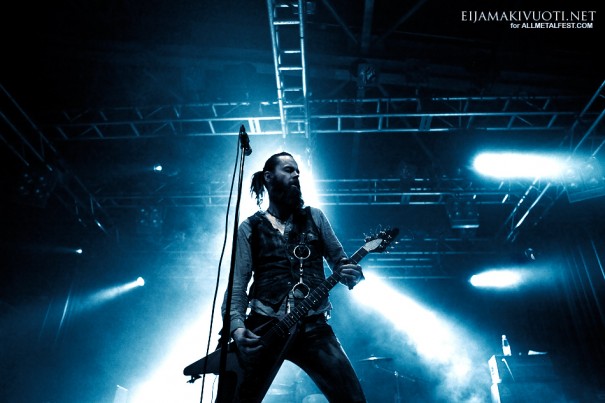 Having been in love and following the band since their 1996 EP “Til Valhallar” which yours truly heard a few years after its release Sólstafir always had had a place in the playlist under “Favourites” but since “Köld” they became a band yours truly could listen to 24/7 and their music has played an important role in life over the last years. “Svartir Sandar” only confirmed their place in the musical pantheon so a lot was expected going to this gig with this mindset, and being objective might be a challenge. 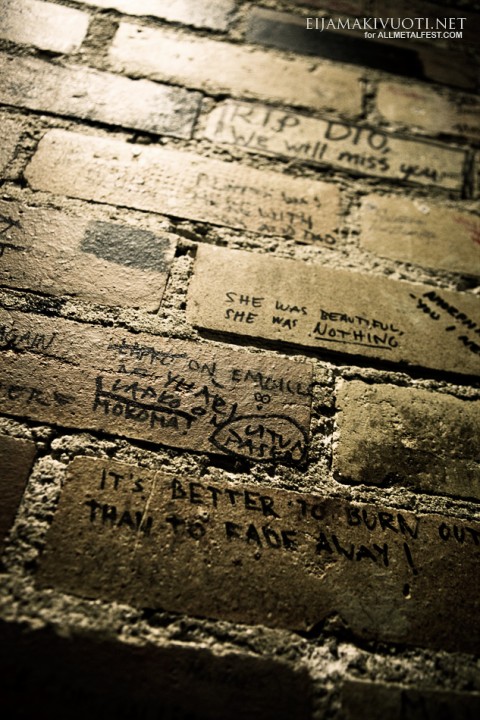 To forestall one thing right at the beginning: There were more people attending this concert than the one in 2009. However, Nosturi with a capacity of 900 people was far from being sold out. But the one lady that was the concert in 2009 and kept shouting for Sólstafir to play “Bitch in Black” throughout the whole concert did not attend this gig or then had given up on hearing this particular song being played live which lowered the “audience-annoyance-factor” considerably. The gig was first planed to take place at the heart of Helsinki at DOM, a nightclub that had been a church before but since the venue had changed from a rock/metal place to being a disco night club the concert was moved to the bigger Nosturi. The tickets were 18 € which is a normal price for concerts of a band like this in Helsinki. It was the first of five concerts in Finland for Sólstafir and their support Hexvessel, continuing up north to Tampere, Jyväskylä, Oulu and finally back south to Turku during the next days. Drink prices in Nosturi are also in the normal range for Helsinki, with beers and ciders around 5 €.

Upon entering Nosturi and climbing up the stairs to the concert and bar area one could see that already a few people had gathered – although at the Nosturi it is always hard to say how full it really is as it is rather spacious and therefore difficult to see the whole crowd because there are two floors: The ground area with the stage and one bar and the balcony where also the bigger bar is located. One indicator how many people are expected is always if the small bar on the ground floor is opened: it was not this evening which was no surprise since it was a normal Thursday and there were still many tickets available on the day of the gig. 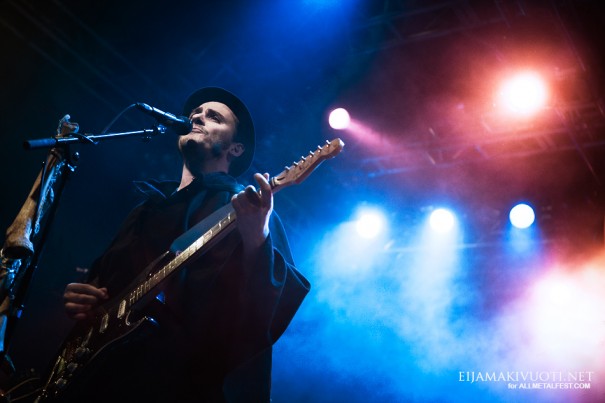 The opener of the evening were Hexvessel from Tampere, a psychedelic folk band which yours truly had heard the name off but never seen nor heard anything off. The first thing that caught the eye was the sheer amount of people on stage: Around front man Mat McNerney, an English man that has moved to Finland in 2009, there were six other band members playing guitars, drums, bass, bells, violin, and rattles. (McNerney is otherwise known from bands such as Dødheimsgard and Code). One then definitely could hear the British influences not only in McNerney’s English pronunciation but also in the music and the band created a dense atmosphere. Often with so many musicians on stage the show and the songs get too overloaded, but they managed to keep a simple, earthy feel to the show and music. And no matter what others might think, skulls and bones as stage and microphone stand decoration never get old! 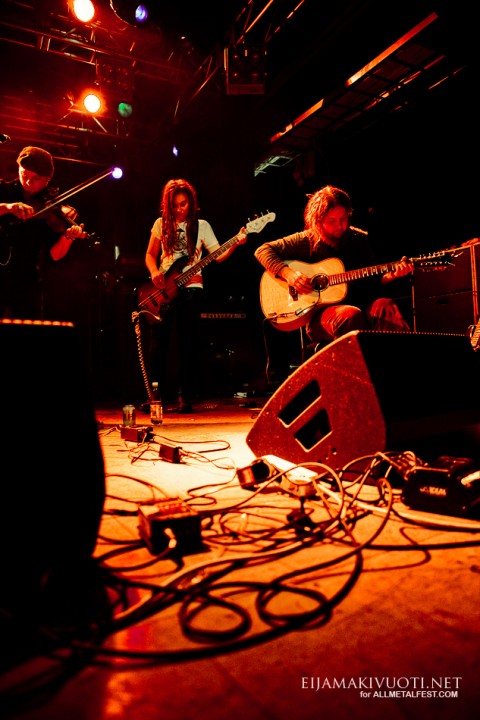 The music kept its promise to be psychedelic but over time one could get the feeling that maybe some herbal help might have been a good idea to get fully into it as the set was probably one of the longest yours truly ever saw an opener play – a full 60 minutes. Now, if the Nosturi would be a venue where one could sit down in comfy chairs and relax it might have been ok, but standing there only slightly intoxicated by the legal drug no. 1 it started to drag on a bit. Despite that, the band managed to catch one’s ear and eye over and over again e.g. when they played “I am the ritual” and the lines “Holy mother merciful / Holy mother angel” were repeated with growing intensity. The simplicity of the music and performance, masking its complexity were intriguing and the overall show definitely left a mark in the memory of yours truly despite checking the watch and wondering how long they would continue to play after a while.

Then it was finally time for Sólstafir to play which also manifested itself in the continuously growing crowd. Starting full force with “Köld” the band instantly had the crowd in their hands. It is always amazing how Sólstafir manage to create an atmosphere that is filled with beauty, emotion, sadness, longing and happiness all at the same time. Not even the drums that were slightly too loud managed to destroy that. The interaction of melodies and Aðalbjörn’s voice just makes you want to emerge yourself into the music. And the fact that yours truly considers Icelandic to be one hell of a sexy language does not do the whole thing any harm. Especially when Aðalbjörn is singing “Og hjartað slær svo ört” it just sets your teeth on edge. Luckily “Svartir Sandar” was fully sung in Icelandic after the former albums that had mixed English and Icelandic lyrics so yours truly got her money’s worth since they as expected played many songs of “Svartir Sandar”. Above all “Fjara”, a song which had quickly become a favourite after listening to “Svartir Sandar” for the first time was amazing live and an absolute crowd favourite and showed Sólstafir at their absolute best – the intensity they create is second to none. 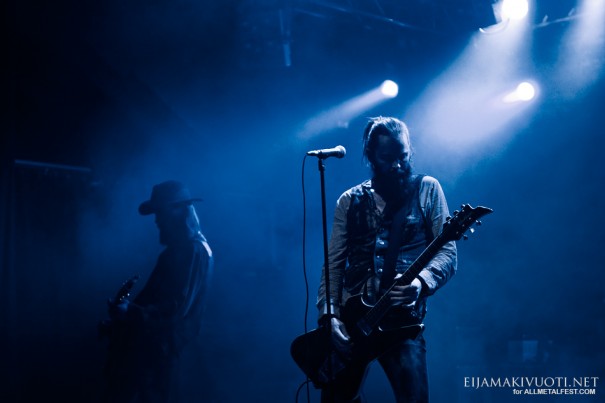 It was clear that the audience also wanted to experience every minute of the set as the degree of attention and soberness was surprisingly high for a concert in Helsinki so close to the weekend. But enough with blowing sunshine up Sólstafir‘s collective behinds: Despite a set filled with magical moments the overall gig was lacking something compared to previous live shows yours truly had seen. They played a solid set but it was not THE show. Maybe their energy was not the best that night or there was slightly too much routine in their performance. Maybe it was just that after having seen them several times it was quite difficult to get the same feeling and be as excited as when you see a band for the first time and they just knock you dead like Sólstafir had done upon seeing them at Jalometalli in 2009. Also the set was quite short particularly compared to how long Hexvessel had played. Be that as it may, it was still a good concert and every minute of it was enjoyed. It is anyway a strange thing with Sólstafir that as soon as the last notes have disappeared into the night air you want more; more of their music, the atmosphere and acoustical images they paint – be it live or on their records. So despite it having not been their best gig you can be sure the next concert or release date is already marked in the calendar. 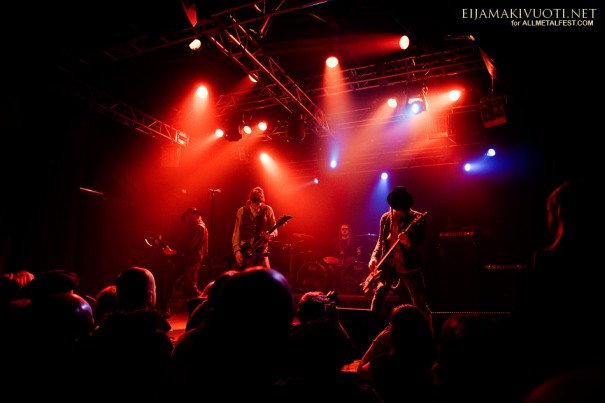 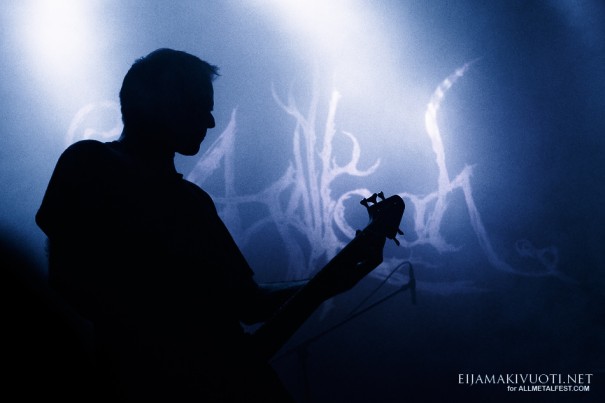