The S.C.E.N.E Music Festival is one of the largest and most anticipated,one-day, all-ages, independent music festivals in Canada. The S.C.E.N.E. Music Festival truly captures and celebrates the independent spirit of music. Sunday, June 28th 2009 marks the 14th annual S.C.E.N.E. festivaland will feature over 150 bands, 17 stages, 13 venues and the promise of one hell of a day!

S.C.E.N.E. is the St. Catharines Event for New music Entertainment, a locally-based independent music festival that started as a showcase for local talent. While still having a strong focus on Niagara-based independent acts, as the first S.C.E.N.E. did with 20 local acts on three stages in 1995, the S.C.E.N.E. Fetival has exploded with numbers and diversity. 2008’s 13th annual S.C.E.N.E. Music Festival drew over 6000 people attracting international acts, industry and media interest from as far afield as the United Kingdom. This benchmark year featured 16 stages (including 2 outdoor stages) in 12 all-ages venues all within easy walking distance in St. Catharines’ downtown featuring independent pop. hip-hop. reggae, ska, celtic, country, folk, queer, punk, metal, funk, emo and rock ‘n’ roll. 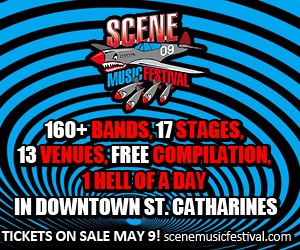 S.C.E.N.E. has now evolved into an all-ages, one-day event featuring local, national and international independent artists. The S.C.E.N.E. Music Festival has provided a vital springboard for such artists as Billy Talent, Alexisonfire, Silverstein, City & Colour, Neverending White Lights, the Salads, Boys Night Out, the Mahones, Cancer Bats, Attack In Black and Bedouin Soundclash and has featured international acts like New York City’s Madball and Del the Funky Homosapien Having gained an international reputation as one of the top-flight music events in Canada, in 2008 the festival received hundreds of artist submissions from throughout Canada and the United States. Of the 157 bands featured last year over half of the artists chosen originated from the Niagara Region, showcasing the immense talent in our locality. Again this year a sampler of more than 40 artists will be given away free to the first 2500 people though the gate when the doors open at S.C.E.N.E.’s Market Square headquarters on the day of the festival.