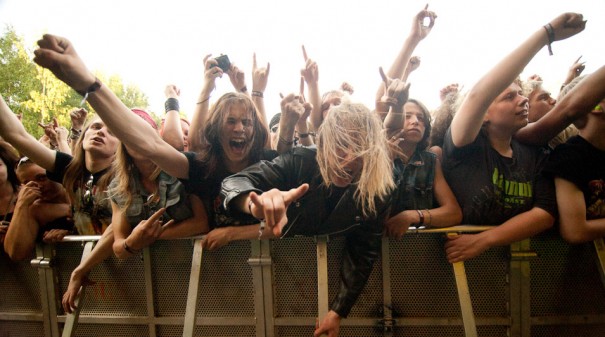 It’s supposed to be hot in a sauna. This hasn’t been the case with Sauna Open Air metal festival in the past couple of years. Last year we enjoyed nearly constant rain and breezy weather, the year before that temperatures even went sub-zero at nights. This year was different though, and the weather was indeed worthy of the name Sauna; over 30 degrees Celsius at best.

There are lots of accommodation possibilities in Tampere. The problem is that the most popular ones, like the reasonably priced Omena Hotels in the city centre, are booked up well before the festival. For late birds there’s luckily enough space in the Suomi Camping Härmälä. They offer a selection of small cabins and caravan and tent spaces. Because the camping site is full of festival goers and the queues were long, we missed Moonsorrow. There is a short bus ride from the camping site to the centre and a 10-15 minute walk from the centre to the festival venue. 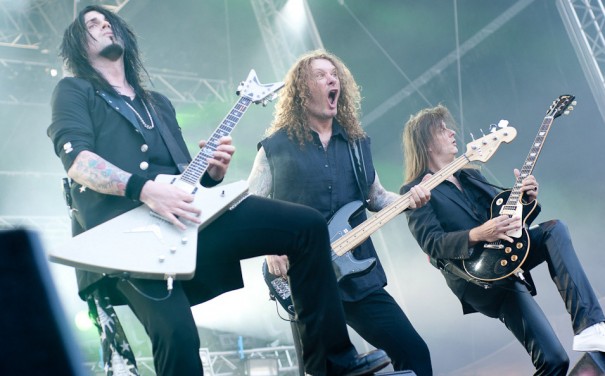 We just arrived to Eteläpuisto in time to see the first band on the main stage: Helloween from Germany. They played a mere two songs from the newest album and concentrated on the old material. They had successfully fitted their most important hits in the 75 minute gig and both the band and the audience seemed to have a good time. It probably wasn’t the best gig from Helloween that I’ve seen but a very good one nevertheless.

Next up there was Omnium Gatherum at the park stage. There are two bar areas on the festival site, one for each stage. The one near the park stage is the best place to relax, sit down on the lawn and listen to music. Beer is expensive in Finland. Regarding that, the price at Sauna wasn’t that bad, six euros for half a litre of (occationally warm) beer or cidre. 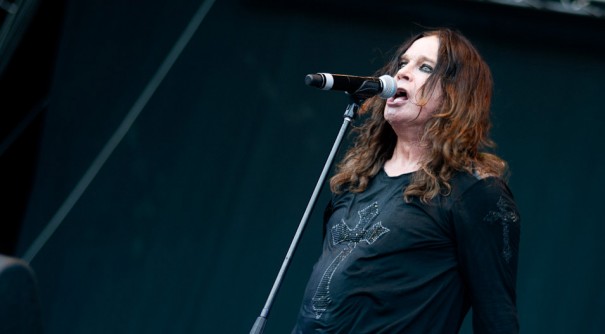 Headlining on Thursday was good old Ozzy Osbourne. They were playing hit after hit and some Black Sabbath songs. The closing songs “Mama I’m Coming Home” and “Paranoid” made sure the audience didn’t feel like leaving early. In Finland “Paranoid” is the song people are asking bands to play instead of “Free Bird“. I bet the singing from the audience was heard far away from the festival area. 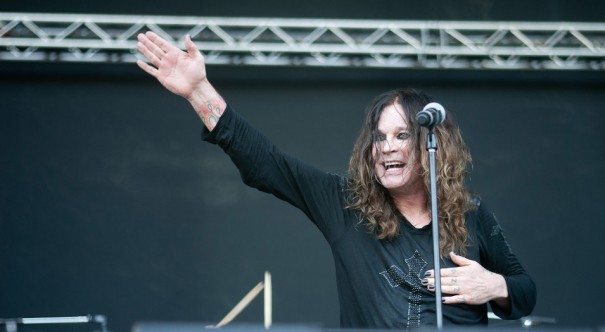 There were about 8500 metalheads attending Sauna Open Air on Thursday. The weather was exceptionally hot for early June in Finland and even the night was mild and the long sleeves could be left in the backpack.

There were two official places to continue the partying after the show was finished at 22.00 each night. There would have been Ozzy Osbourne tribute and support at Jack the Rooster but we went to YO-talo to the NKM Metalfest. The three day ticket for the fest was 22 euros and with the Sauna ticket there was a discount for single day tickets. 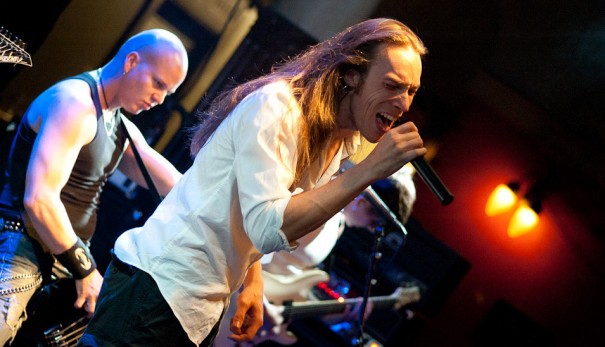 There were just a handful of people to see the bands from Lahti, Finland at the YO-talo. Pressure Point opened the NKM Metalfest with an energetic performance but the audience was small and evidently tired from the day in the sunshine. Kill the Romance got the people a little bit better on their feet. As for the audience the players from Lahti seemed to be rare too, because the bands were sharing some players and using session musicians. But it was predictable that Thursday night would gather less participants because of the working days for many on Thursday/Friday.

The night was definitely warm in the camping site lodge. The warm weather was very nice and at the lukewarm showers there wasn’t a long queue anyways. I’d recommend a heavy breakfast before going to the festival area because festival food can be quite expensive in Finland. If there is time before the bands performance, the park just outside the festival area is a nice place to sit down for a picnic and some drinks. Half a liter or smaller unopened alcohol-free drinks in plastic bottles are allowed to be taken to the festival area. 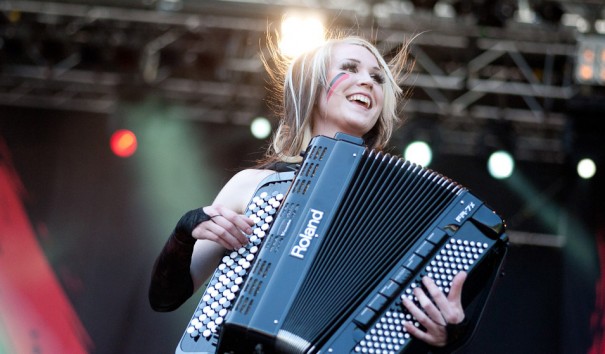 We were just in time to hear the last songs from Rytmihäiriö (FIN). But The-Must-See band for me on Friday was really Turisas (FIN). The battle metal band was having a lot of good energy for their first festival appearance this summer. They played quite many songs from the new album “Stand up and Fight” but that is mainly a good thing because the album is great. 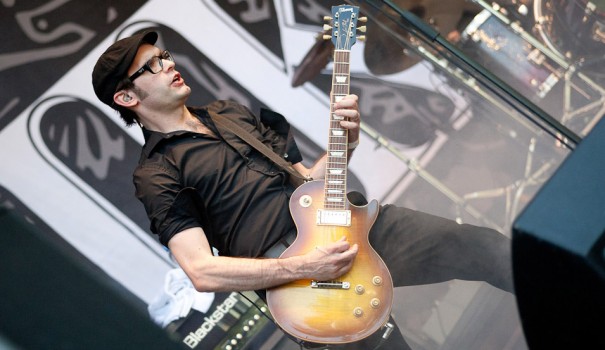 Next on park stage Viikate (FIN) shared some of their melancholy with the audience. They have some catching sing-along lyrics and this is something to listen to by a drink. 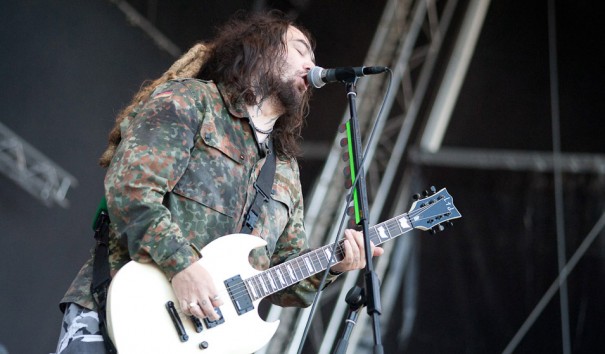 Cavalera Conspiracy from Brazil was the first band from abroad to play on Friday. I think the audience wanted to hear mostly some old Sepultura songs and we were mainly socializing at the main stage beer area where the sun was really scorching. Joey Belladonna (USA) was playing quite a bit of Anthrax on park stage but our feet were so tired that we had to take our places further away from the park stage drinking area, near the Poppamies stage where some people played covers. 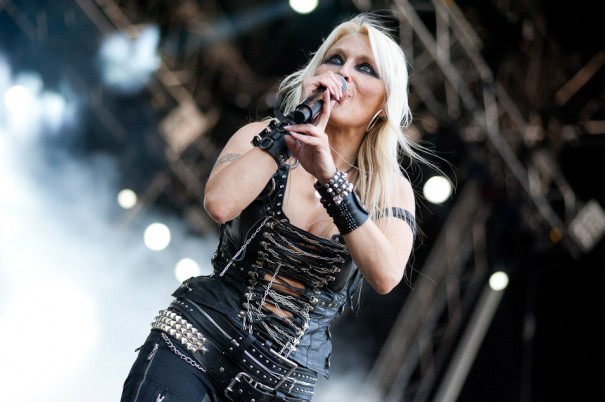 After a moment of rest it was time to see Doro from Germany on the main stage. The metalqueen was definitely putting up a great performance. I’d say she kicked ass and the slow songs were also great! 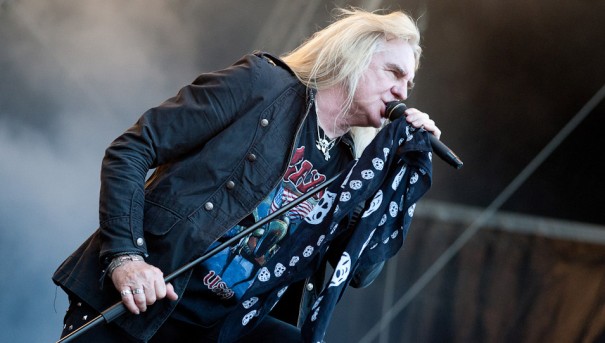 We listened to Dio Disciples only for a moment a bit further away getting ready for Saxon. Saxon served a tasty set of new wave British heavy metal on the main stage as the closing act for Friday. It seems that this band is nearly ageless on stage. As an added surprise Doro came to stage to sing the last verse of “Denim and Leather“. 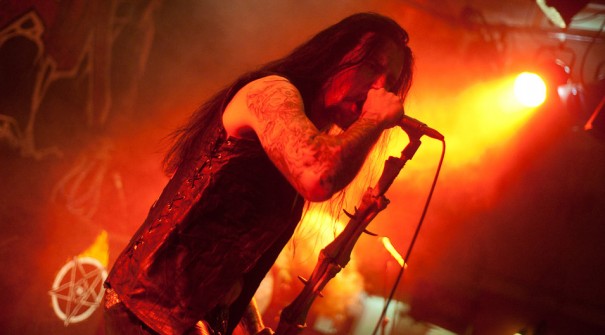 After the second festival day it was time to head to the YO-talo again to see three Finnish bands. Local band Ruinside opened the night with some thrash metal. MyGrain kept up the good energy with their melodic death metal show but the band most of the people had come to see was Deathchain from Kuopio playing death/thrash. This night the YO-talo definitely wasn’t empty and the audience was having good time (with the exception of our photographer).

Sauna Open Air made their record for single day public as 11 000 people attended the Saturday and also for the whole festival counting altogether 26 000 festival visitors. They had succeeded quite well with the organization: the queues at the bar areas where not that bad at all, there were enough toilets and they put one more water supply for Saturday and there was enough space for the crowd. 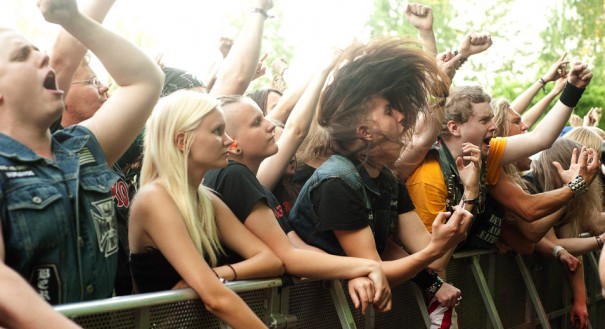 The hot weather continued on Saturday the maximum temperature closing to 30 °C. We were just in time to see the last songs from the short set of Finnish Battle Beast playing traditional heavy metal with strong female vocals on park stage. 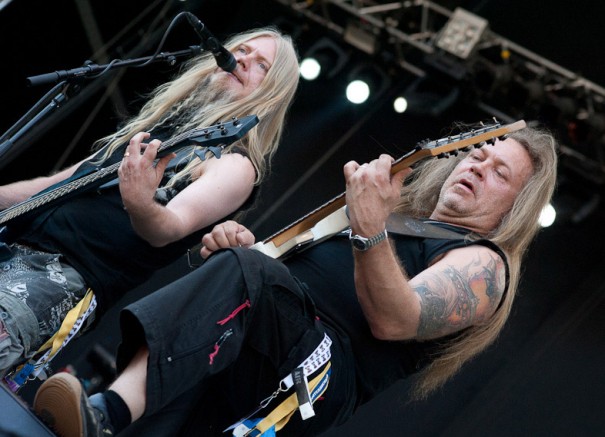 Saturday’s opening act on main stage was the dinosaur (as they call themselves) band Tarot founded in Kuopio in early 80s. I’ve seen this band on stage many times and a thought crossed my mind to visit the beer garden… But what can you do with a gig is entertaining as Tarot’s? They played the whole album “Spell of Iron” now after 25 years after release. It was clear the guys were having a great time. There were plenty of bad jokes included in the gig as well.

We missed Blake on park stage because a little rest was needed before Queensrÿche (USA) on mainstage. These forerunners of progressive metal gave us an atmospheric show with a track like “Eyes of a Stranger” as a perfect highlight. The fans would have been pleased for some more old material but I think that the new songs also worked pretty well live. 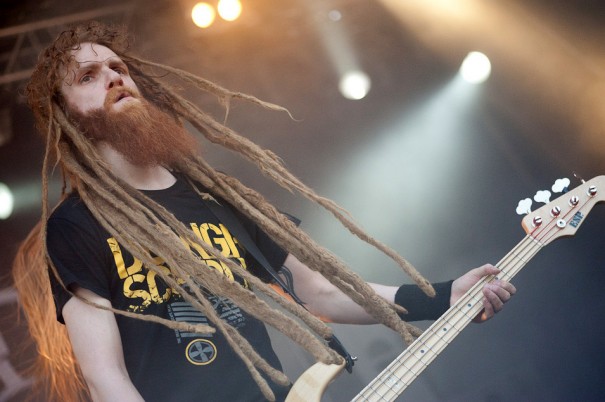 Mokoma from Lappenranta, Finland performed a nice short gig on the park stage. True to their way of performing the energy level of these guys was high enough. 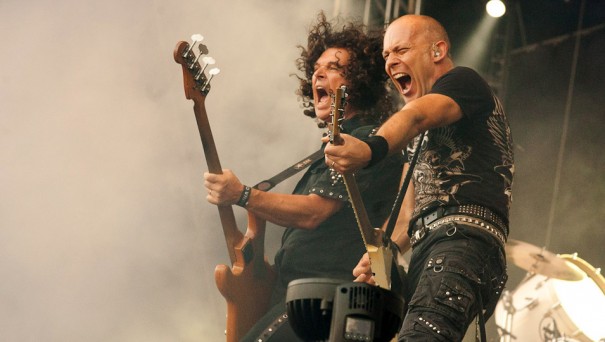 Accept (GER) was on fire on the main stage and all the hands in the audience where in the air to the sounds of
“Balls to the Wall“. There was a really great performance from these forces of heavy metal. It was the first time for me to see the band after the last comeback in 2009 and with Mike Tornillo as the vocalist.

Because of the Accept’s great gig and coming two hours before Judas Priest, Sparzanza’s (SWE) audience was quite small. People needed some air in between these two awesome gigs. 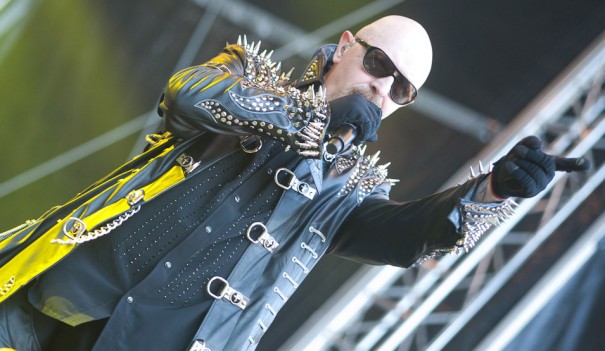 Headlining the Saturday and the whole festival was Judas Priest (GB). As a part of their farewell tour this 135 minute gig was probably their last ever gig in Finland. And it was quite dynamite. The set was a cut through the whole Priest production of Rob Halford’s times. Richie Faulkner was playing well, even though we all missed K.K. Downing. Rob Halford’s voice reached the steel cutting levels at some point. The audience deserves to be thanked for the the sea of hands in the air and the sing along lasting from the first words to the very end of the gig sometimes the singing being really loud. 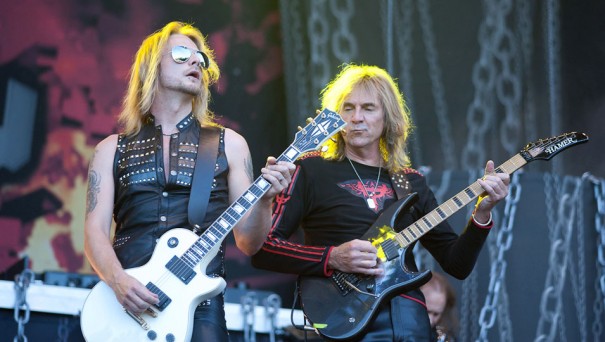 The last encore came after some serious furor and was well suited for the end of the gig: “Living After Midnight“. It is such a shame that a band in this trim will end their career now but at least they will do it with boots on. 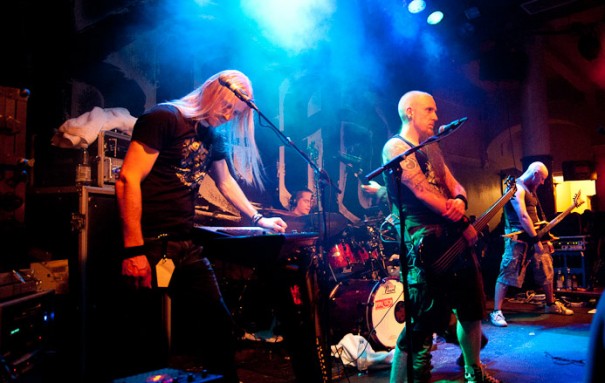 After the amazing Judas Priest we had to get some drinks at the park before heading for the NKM Metalfest for the last night. This night a trio of Finnish bands was performing. As on Friday and Saturday there was a good number of people attending and these bands seemed to get the most out of the crowd. There were actually even some of the main stage band members on the gig. Half of the headliner Kiuas band members have been changed after the last album and the new line up seemed to fit nicely together. The feel was cheerful and they probably would have played even more encores if they wouldn’t have to let next band on stage at some point.

Closing act for NKM Metalfest was Dreamtale. The gig was late in the night but it didn’t seem to bother anyone too much. This band definitely took the most out of their spot as the last band when they played so many encores that the audience lost count.

This year’s Sauna Open Air was definitely the best one I’ve attended considering the line-up, weather and even the after parties. It will be hard for the organizers to find bigger names for the headliners next summer.