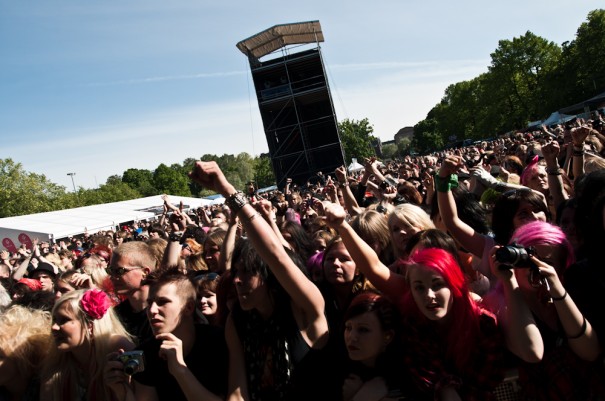 With its 10,000 viewer capacity, the Kaisaniemi park is the former home of Helsinki’s biggest metal festival Tuska Open Air. Today it continues to serve as an arena for large one-off shows like this one right besides Helsinki’s central railway station. There’s been almost as many different type of setups on the park as there’s been events, and this time around the rather small stage prepared for Mötley was set to face the railway station and the nearby hills. This provided a pretty good view for those flocking outside the area enjoying the warm weather, hoping to catch a glimpse of the bands despite the lack of a ticket inside. 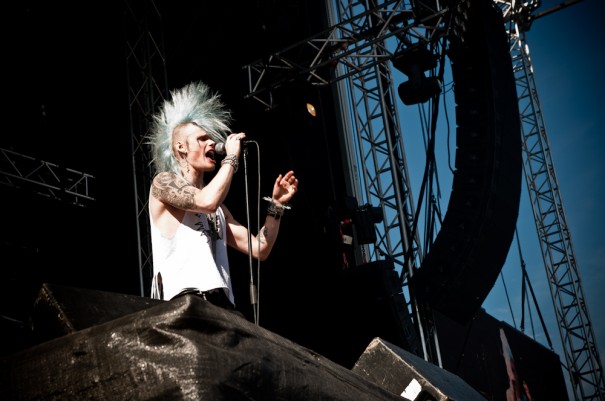 The evening’s opening act Crashdiet would probably not exist if it wasn’t for Mötley Crüe. They’re one of the few bands that have been successful at bringing the old glam sound back thanks to their solid songwriting abilities, and there’s no doubt that they managed to win a few Mötley fans over thanks to this set. They’re not afraid of letting their influences show through, and they don’t by any means sound like they came with a time machine from the 80s, thanks to a healthy amount of originality in their sound. 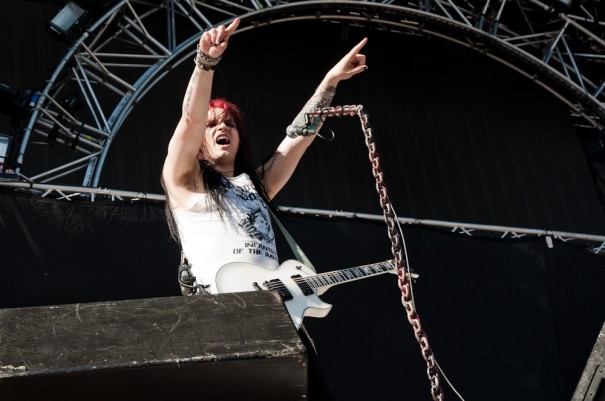 The Stockholm based group has gone through rough times, and now continues to spread the legacy of the band’s original frontman/founder Dave Lepard with the mohawk-sporting Simon Cruz fronting the quintet today. Cruz is a solid singer who took command of the stage from the start of the show, as the band went through most of their catchiest songs like “Generation Wild”, “Riot in Everyone” and “In The Raw”. Crashdiet also played a new song titled “Anarchy”, which faithfully followed the successful recipe of their first three albums: simple hard rock with plenty of hooks, topped with catchy vocal lines and cheesy lyrics. Indeed, a common recipe also utilized by the other band on the billing..

Crashdiet’s setlist:
Native Nature
Down With The Dust
Straight Outta Hell
So Alive
Save Her
Rebel
Riot In Everyone
In The Raw
Knokk’ em Down
Breakin’ the Chainz
Generation Wild 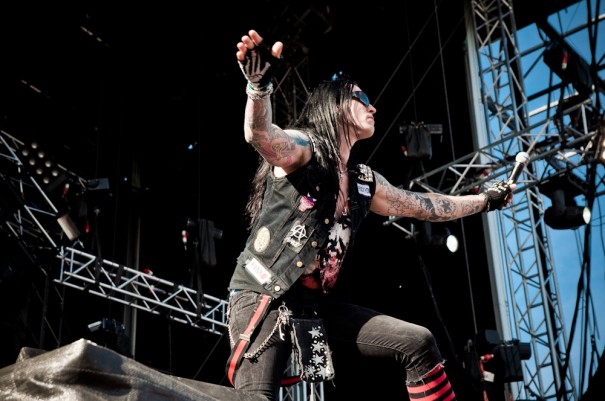 Already during Crashdiet‘s set it was evident that the crowd had showed up also for the support acts, but by the time Hardcore Superstar took to the stage, it looked like this could have easily been the evening’s main act, too. Hardcore Superstar was met with tremendous enthusiasm from the Finnish crowd who joined the band in a sing-a-long frenzy right from the get-go. 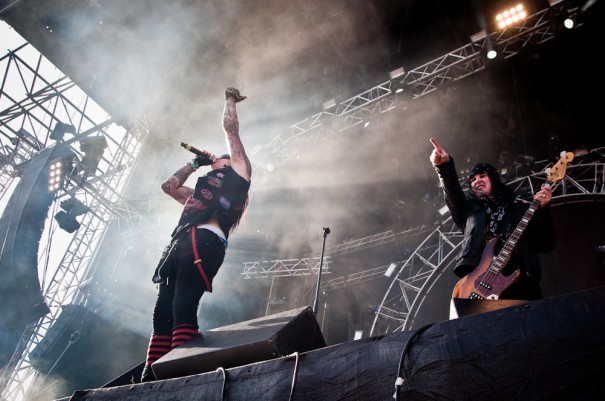 The band opened with “Sadistic Girls”, and one of the band’s local friends, Antti Anatomy (Negative), jumped on the stage to take care of the Finnish spoken intro of “Guestlist” which was up next. Hardcore Superstar really seemed to enjoy their time on the stage, and loved to interact with their Finnish fans. The band’s slow song “Run to Your Mama” and the radio hit “Moonshine” got the loudest crowd response of the set, and during “Last Call of Alcohol” the band’s singer Jocke Berg lifted one of the girls from the front to the stage to help him sing the last chorus of the song.

No doubt a fun set, but very similar to the ones seen from the band on Finnish soil during the last couple of years, as well as just a few days before in the Helsinki-edition of Sonisphere, too. 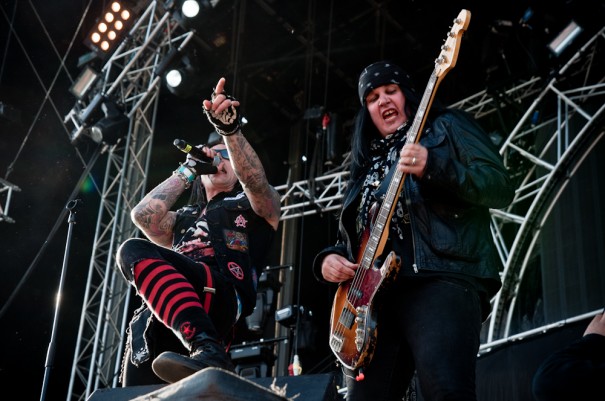 The show was close to sold out and the queues at the beer garden started to grow unbearably long prior to Mötley‘s set.

Thankfully the band entered the stage pretty much on time, opening their endless hit cavalcade with Wild Side. Very few know the truth behind Mötley Crüe‘s interpersonal relationships, but what matters is that despite all the controversial rumors (such as Vince Neil reportedly staying in another hotel than the rest of the band) in the media, the band stands a solid unit on stage and remains an entertaining live act. 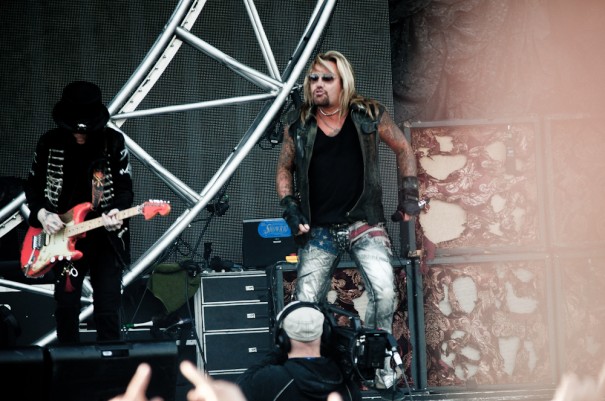 In bright daylight and without any pyros, Mötley‘s production was not as striking as we’re used to see from the LA band. In addition to the mandatory chick dancers, a 360 degree drum roller coaster was the only notable thing about the stage show. It was utilized during Tommy Lee’s 5 minute solo spot, as a contest winner sat on the passenger seat next to his drum set, when the whole thing was sent midair, upside down, while Lee continued to play his beats on top of some upbeat industrial track. Not overly entertaining but I guess it qualified for an acceptable rock n roll stunt. 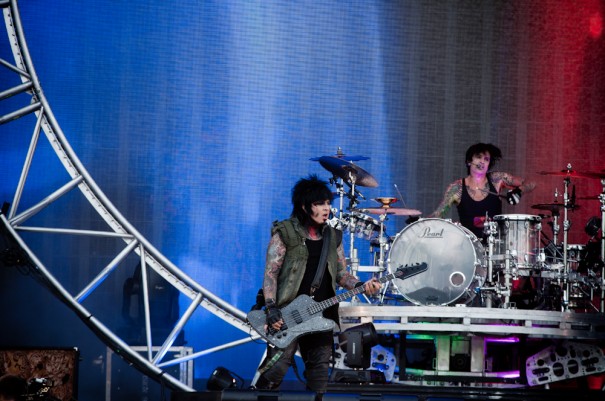 To say the very least, Neil has never been a particularly good singer, but that’s never been the point of the band anyway. Very few rock bands can present such a strong no-filler set packed with sing-a-long hit songs. I can’t think of many other groups whose setlists would consists exclusively of songs that I’ve heard on radio a million times before. 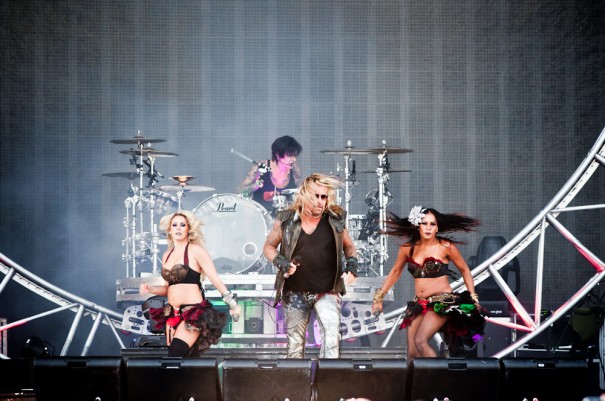 It would be easy to write Mötley off as dinosaurs who should have quit a decade ago, but really- “The Saints of Los Angeles” (from 2008’s album with the same name) is living proof of the fact that same of their later work actually holds no shame to the band’s biggest hits from the 80s. The track was one of the first songs of the set for a very good reason, back to back with 20+ years older tunes.

The band played through their no-surprises set with authority and the crowd loved it, with all the usual antics- Tommy‘s profanity-filled speeches, minimal amount of talk from Vince, Mick‘s very minimalistic presence.. Was there any surprises at all? Not really- they’re one of those bands that typically go where the fence is the lowest, and hardly ever touch or change their show mid-tour. Or, even between tours.. Either way, did the average fan get what he or she came for? Most definitely. 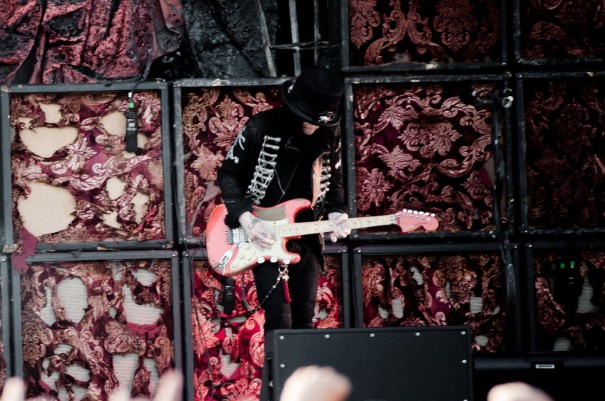 So, did old school beat new school on this friendly clash? Objectively the younger bands showed more enthusiasm and performed their songs better, but Mötley got the crowd going better and their decades of experience and routine showed through in both good or bad. Overall it was a very entertaining evening and each band had earned their spot on the bill.