Finally it was time to hit the road and head to Nummijärvi. Most Finns tend to head to the countryside for the Midsummer leaving the cities quite deserted. Because of the remote location, the easiest way to get to Nummijärvi is by car. There are also some buses going to Nummirock from Helsinki and Tampere (organized by Heavy Metal Tampere) and it’s also possible to take train to Seinäjoki and take a ride on a festival bus to Nummijärvi.

The village of Nummijärvi is located in South Ostrobothnia in Western Finland, about 300 kilometers from Helsinki. There is a tiny, yet decent grocery store about 500 meters away from the festival area, but for example the nearest ATM is located in Kauhajoki 23 kilometers away. The grocery stores can’t sell anything stronger than beer in Finland, so bring your own spirits and wines with you.

Arriving to the sunny camping ground at 17.30 we were suprisingly the first people at Metal Club Mökä camp this year. The first visitors of the festival this year arrived already Sunday night. The people coming to the camping ground Mondays each year have quite a special camping fixture: a festival bus that holds everything from fridge and freezer to enough wood to keep the campfire going for the whole week.

The camping is included in the ticket price. Personally I prefer the camping site at the forest, but when it doesn’t rain, the camping site by the lake is just as good. Remember to take a warm sleeping bag because it can get really chilly at nights. 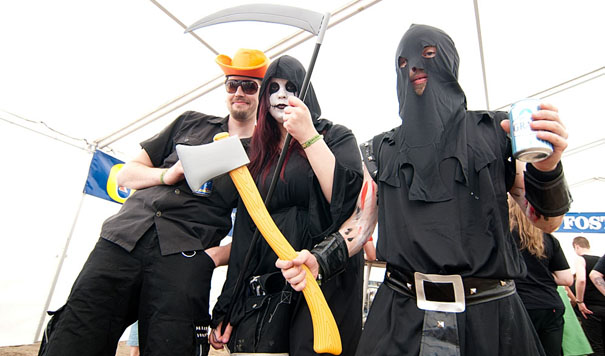 The party begins the moment you set your foot to the camp. Some people even forget to see the bands with the party going on at the campsite. Having put up the shelter and our tents I took a peek of the opening act, Trespassenger. The great weather made everyone happy at Forsters live-stage. This stage is at the beer area, so the minors have to settle for the back row. Beer is quite pricey in Finnish bars. The Nummirock price was €5 for half a litre of beer and €6 for cidre. Wines and spirits are not in the selection.

The main act for Thursday was Korpiklaani. It was a pity that they had some major technical problems and the gig only lasted little more than half an hour plus the breaks trying to get the electrics back. The atmosphere was still great and there was a lot of dancing and laughter in the audience. 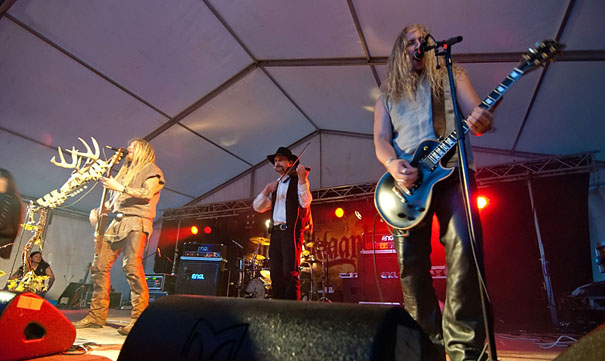 The party went on at the camping ground and the skies were already getting brighter after Korpiklaani‘s gig. There are no pitch black moments in Midsummer in Finland. After the blue moment in the middle of the night the sun comes up again. The first night was quite warm and nice.

Around the noon, before the first band starts playing, there’s some time for swimming in the cold lake, relaxing and barbecuing. I heard some people had put up a tent sauna near the lake. There was also a floating sauna eavesdropping at the lake when the bands played. There is also a nice public sauna at the Nummijärven Leirintäalue, which is a camping area two kilometers away from the festival area. The Nummirock camping ground showers can be quite cold, but there is warm water at least at the times when there’s not much queue at the showers.

Swallow the Sun was the first act on the main stage on Friday. The melancholic music is probably not the best fit for the beautiful sunshine, but the combination worked suprisingly well. This was a good gig to lay down on the grass in front of the main stage. One of the things I really love at Nummirock is that you can see the stage even if you lie down. Just make sure to pick your spot well. 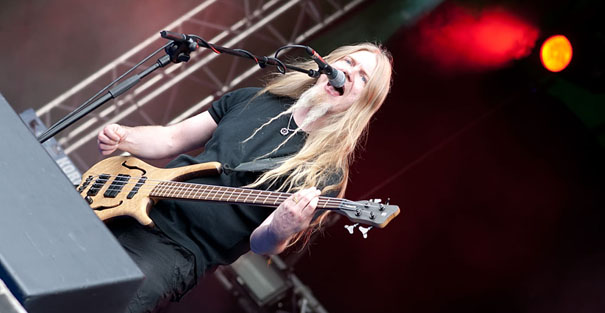 Tarot was the next performer on the main stage. The gig was really good and the guys from the band seemed to have fun. Marco Hietala‘s speeches were also funny. They said it was nice to perform in the sun after couple of rainy gigs before (at least at Sauna Open Air and Myötätuulirock it was pouring).

2 Times Terror had once again really put some effort in the stage show. There was some spanking and strangling as well as a proposal. The keyboardist slammed his (probably broken) instrument to the floor at the end of the gig. 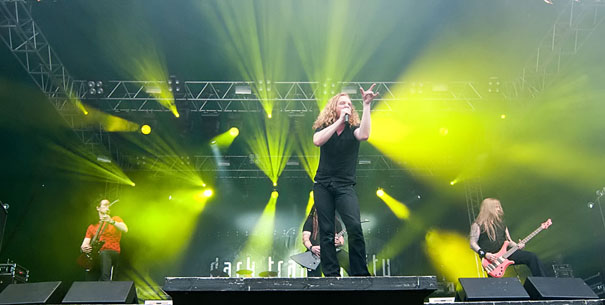 The first visitors from abroad to perform were Dark Tranquillity from Gothenburg, Sweden. It was one of the best gigs at Nummirock this year, at least for myself. The singer Mikael Stanne told to the audience, that it is wonderful to be so far from civilization, catching one of the main points why people come to Nummirock year after year. He really seems to know how to handle the audience and keep up the good humour, reminding us for example, that us Finns are special for Dark Tranquillity. They played both new and old material (ThereIn, Misery’s Crown, Focus Shift, Dream Oblivion, Punish My Heaven, Lost To Apathy, Iridium, The Lesser Faith, The Wonders At Your Feet, Final Resistance). The Misery’s Crown got the audience wild. Dark Tranquillity played a little extra because they had been given wrong info, but I think it was just better that way. 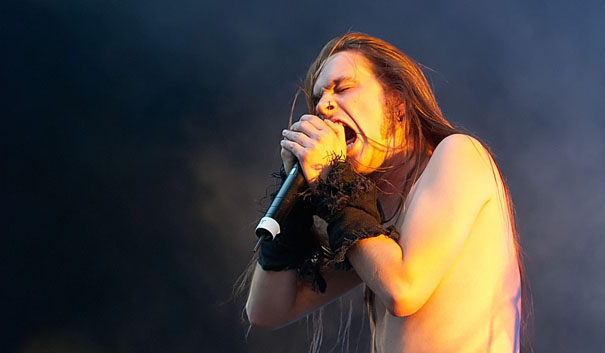 Gathering one of the biggest audiences at Nummirock this year, Finntroll performed at the Inferno stage by the lake. The set consisted mostly of familiar hits and the moshpit was the biggest I saw this year at Nummijärvi. The sunset was beautiful by the lake. Folk metal really is taylor-made for these circumstances.

Fridays last act on main stage was Six Feet Under from the ”lightning capital” Tampa, FL, USA. Nummirock was the first gig of the European tour for Six Feet Under, and despite the jet lag they performed really well. There were quite many songs from the first album, which the audience was delighted about.

I don’t remember seeing that many bands in one day at Nummirock, but the gigs were worth seeing. After one has seen enough shows, it’s a good idea to find something to eat. You can find food like chinese, kebab, pizzas and sausages at the festival. I still recommend to take your basic charcoal grill with you and to buy something to barbecue. 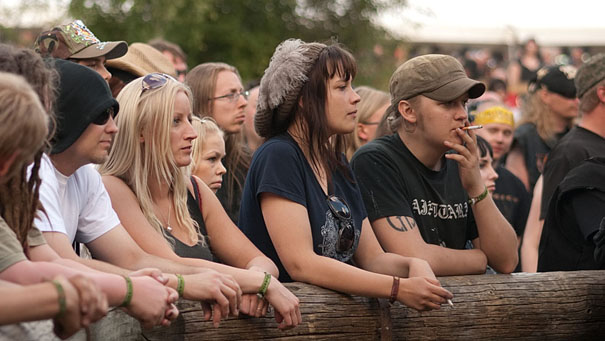 The night between Friday and Saturday was quite cold but luckily as a Nummirock veteran I had taken my wollen winter coat and gloves with me. An extra blanket at the tent wouldn’t have hurt either.

It was raining a little bit early in the morning but fortunately the rain had ended by the time we crawled out of the tent. The sun was shining again. In the morning it is time to recover from the last night and maybe play some drinking games. And there’s also the possibility to get a little sun tan on the beach and relax. At least the cold nights result in cold drinks in the morning…

Insomnium was first band on the main stage on Saturday. Their gig was ok. After Insomnium it was time to see Sotajumala at the Inferno stage. I enjoyed the gig with a beer in my hand at the lake side beer area. The people in the moshpit at Sotajumalas gig seemed to have energy to spare. 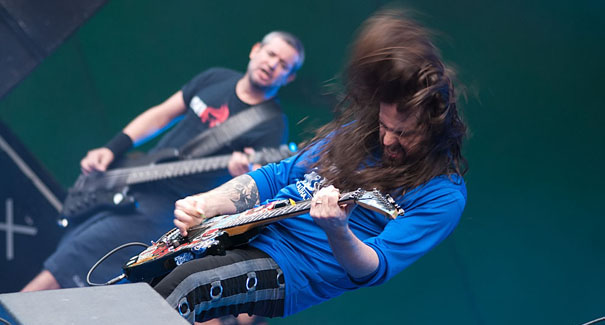 One of the most eagerly waited bands was Sepultura, founded in Belo Horizonte, Brazil. Even though some still miss the Cavalera brothers, the present-day line-up put up a nice show with exellent sounds. Sepultura played at Nummirock in -96 and there were some people in the audience who have seen the both gigs. Derrick Green, who has been singing in Sepultura since soon after the Nummirock -96, was huge on the stage, meaning more that his mere physical size. Andreas Kisser was great with his guitar.

Next on Inferno stage was Thyrfing from Stockholm, Sweden, playing viking metal for a quite small audience. I guess people went to the camp between Sepultura and Venom to have some drinks. Thyrfings set list consisted mainly of newer material; there could have been more of the older songs. But the guys from the band were having fun and enjoyed the Midsummer. 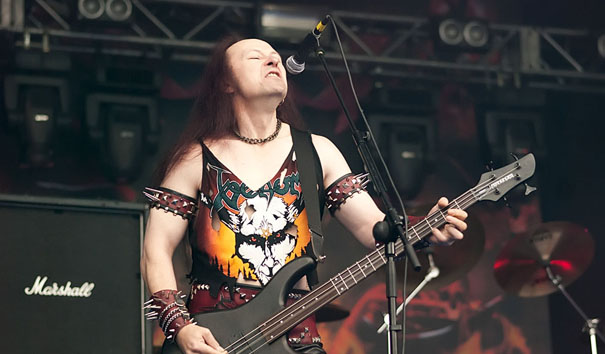 The British Venom founded in 1979 performed next on the main stage. They started with ”Black Metal” and played a bunch of other popular songs as well. The clothings, the performance and the expressions on the faces of Cronos and others were as expected.

There was a big audience at the Inferno stage to see Mokoma. The set list was well-balanced between old and new songs. After the gig many would have liked to hear some more Finnish thrash metal in the beautiful sunset.

Sonata Arctica was the band to end the Nummirock 2010. Tony Kakko‘s speeches were as bad as always, but the show was much better than in Sauna Open Air this year. There were some nice ballads, and the pyros were nice at the darkest hour of the bright summer night.

The night was even colder than the night before, but as long as it doesn’t rain it doesn’t matter. The people at the camp partied all night long except the unfortunate ones driving back home the next morning. Veterans of Nummirock tend to know each other and it’s nice to visit other camps and see the people coming there one year after another. The camping sites for each group are usually in the same spots every year which makes it easier to find all your friends. The furthest international visitors I talked with this year were from Australia and South-America.

Please feel welcome to join the Nummirock family next year! If the bands are even somewhat ok, I’ll be there again,