Misery Index, and are among the bands that will perform at the Mountains Of Death festival, held in Muotathal, Switzerland on August 21-22, 2009.

Suffocation, The Faceless and Suicide Silence won’t play the Mountains Of Death… resp. they perhaps won’t play in Europe at all. The exclusive performance in Switzerland should have taken place within the Summer Slaughter Tour through Europe… at least it was settled and confirmed to us like this. But as the american booking agency now announces some not more precisely explained problems happened in assembling the bands for the European version of this tour. Therefore the booking agency decided to cancel the whole story for this year.

The Mountains of Death Open-Air (short MOD) has been found in 2001 by Reto Ehrler and friends. Since the first realisation the festival has grown steadily and now is an over the Swiss border well known but still growing extreme-metal event in the very heart of Switzerland.

The open-air takes place in the outstanding landscape of the Muotathal on the foothills of the Swiss Alps and comes up with that special and personal atmosphere which it has been well known for ever since. 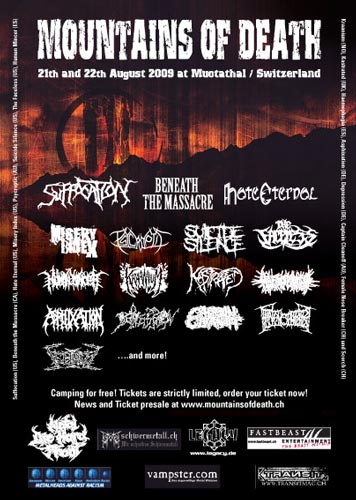 The Faceless – All Dark Graves (Live)