Meh Suff! festival is taking place at Hüttikon near Zurich. A 25 mins train ride from the Zurich main station to Otelfingen and a 7 minutes ride with the shuttle bus provided by the festival will get you to the festival grounds. That is if you don’t happen to arrive at the same time with other 100 metalheads, like we did, and hope to share the only small 20 seats shuttle van.

It was a sunny Friday afternoon when we arrived at the camping place, not too warm, not too cold, just perfect. The camp was situated a few minutes walk from the stage area. No cars were allowed in the camping and that’s always a good thing for me. Toilets could be found only at the camping entrance, but on the plus side these were the best and cleanest toilets I have ever seen at any festival. 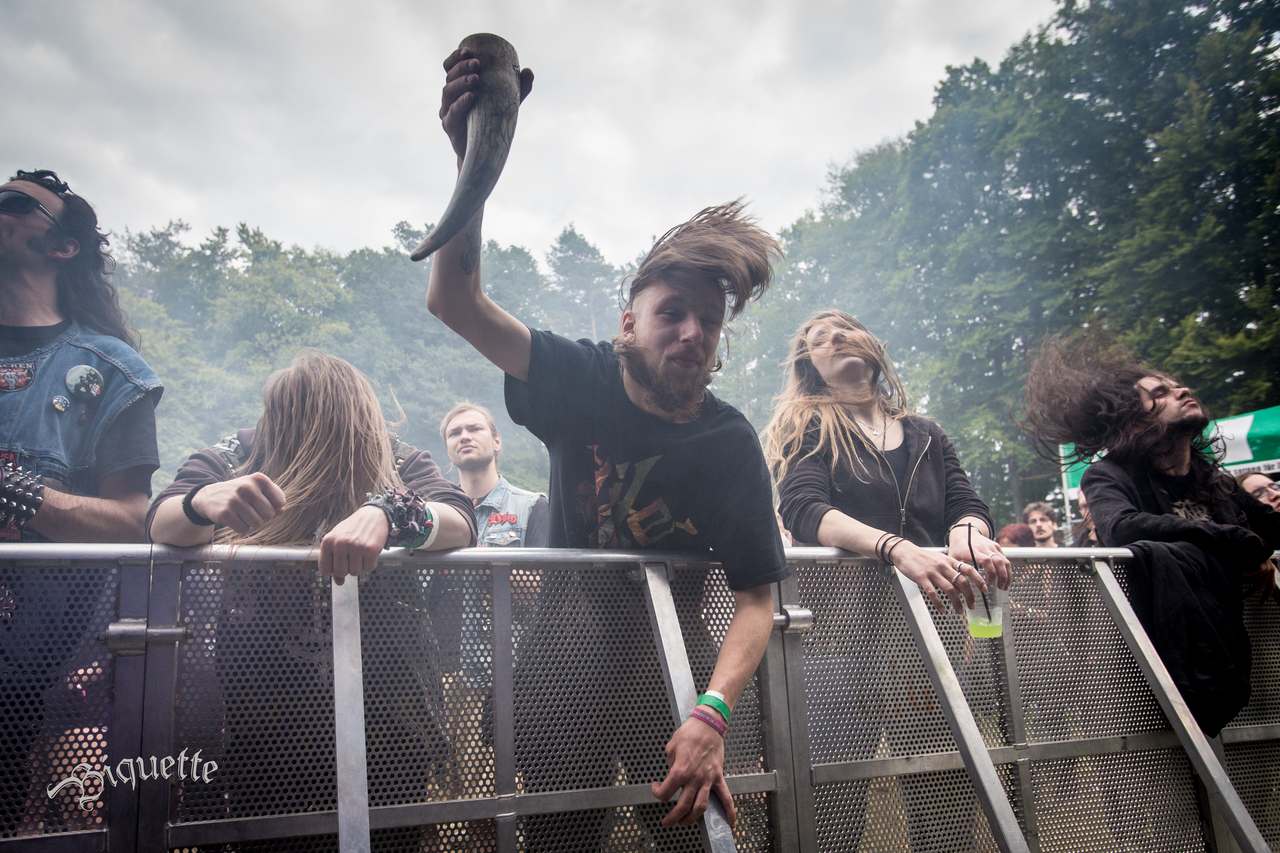 While on festival grounds, a beer would set you back 6 CHF and a fast-food main dish (like grilled meat with french fries on the side) around 12 CHF. That said, there are not many things around to spend your hard-earned money on. The metal merch zone is one tent only and the merchandise is mostly from the bands playing at the fest.

The first band of the day was Bloodthruth from Italy. While I wasn’t familiar with their music, they made a good first impression. They played a mid-tempo brutal death metal that at times reminded me of Cannibal Corpse. The drums were quite loud in the mix, at least from were I was standing, but still it was an enjoyable introduction to a mostly death metal day. 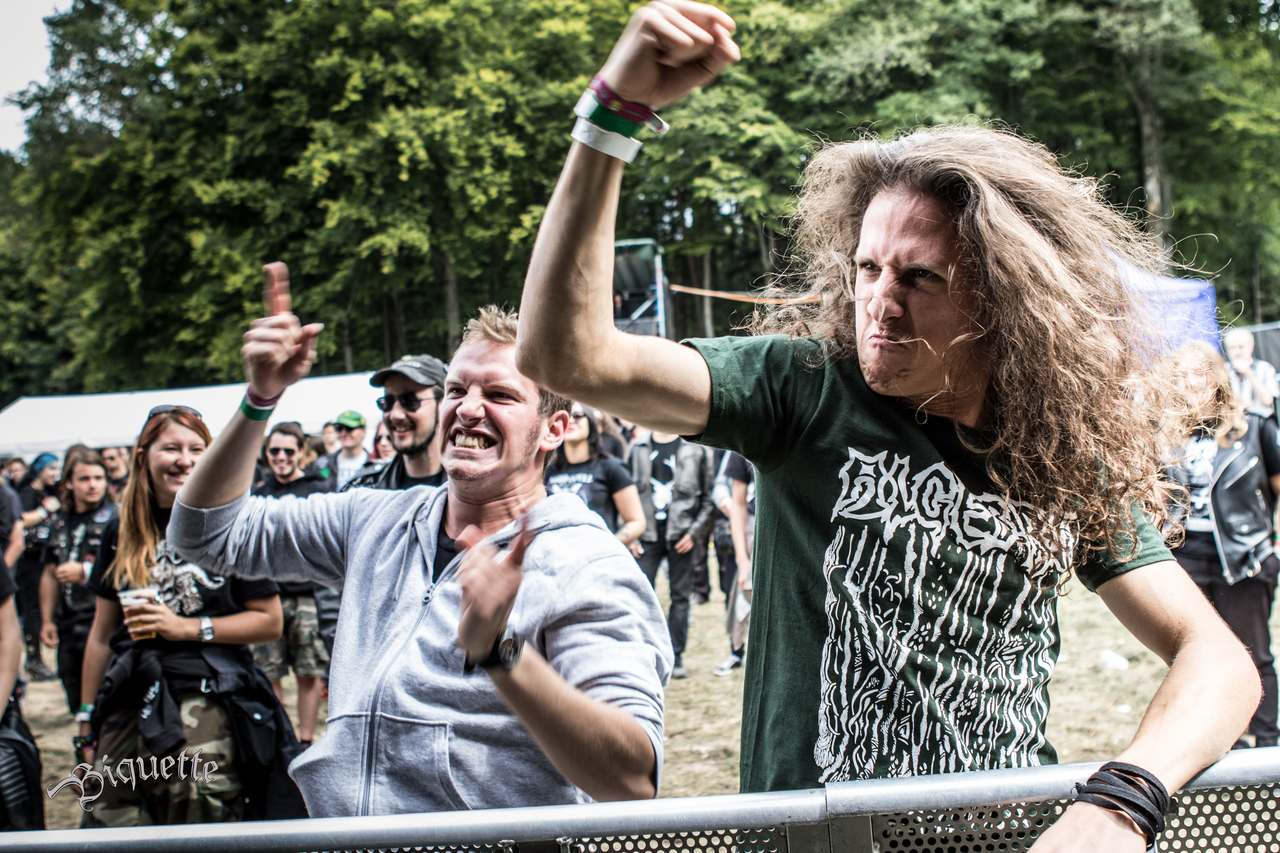 Meh Suff! is a one stage only festival and some people could complain that there’s not much to do in the 35 break between the bands. Not me. I find getting another beer an activity good enough in itself (on its own), so no complaints here.

When the next band, Blood Runs Deep, started playing most people were still on the way to the festival or pitching their tents on the camping nearby. Half of the bars and food stalls around the stage weren’t yet open. While off stage it seemed that everything was moving at a slower pace than it was supposed to, the same thing could have been said about the music on stage. Blood Runs Deep were in no rush. And while slow and melancholic usually equals cheesy in my book, these guys managed to make it sound dark and actually pretty good. I haven’t heard any recorded material from them, but I liked the live show. 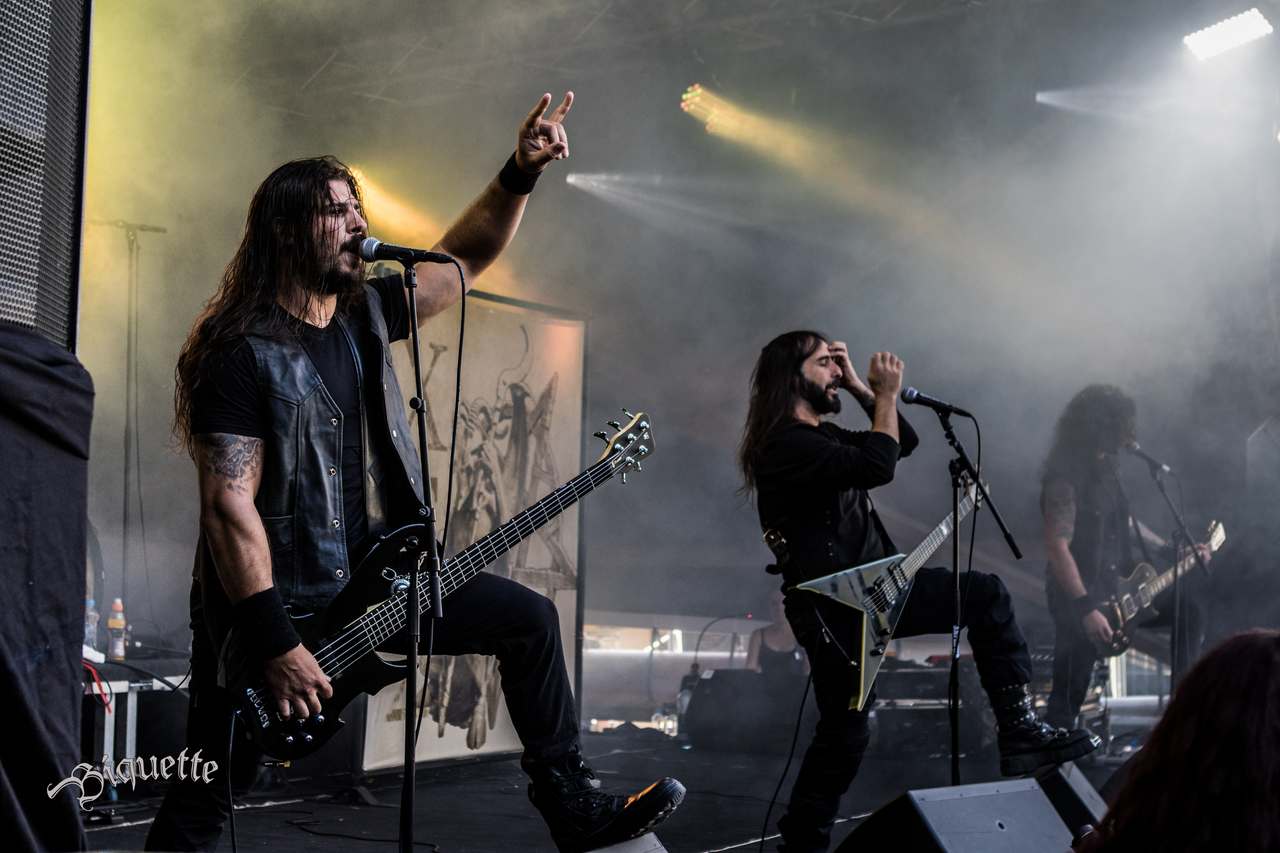 I dare to say that Rotting Christ is the most catchy band playing the metal festivals scene this year. But in their effort to make some of the songs simpler and easier to digest live at times they degraded their music into something that resembles a football match arena type of sound with more shouting and cheering than actual playing. For a while I was afraid that the rotting will stop and we’ll witness a second coming right there. But I was wrong. Before we knew it the songs became interesting again, had substance and behind the veil of catchiness the rotting process resumed again. 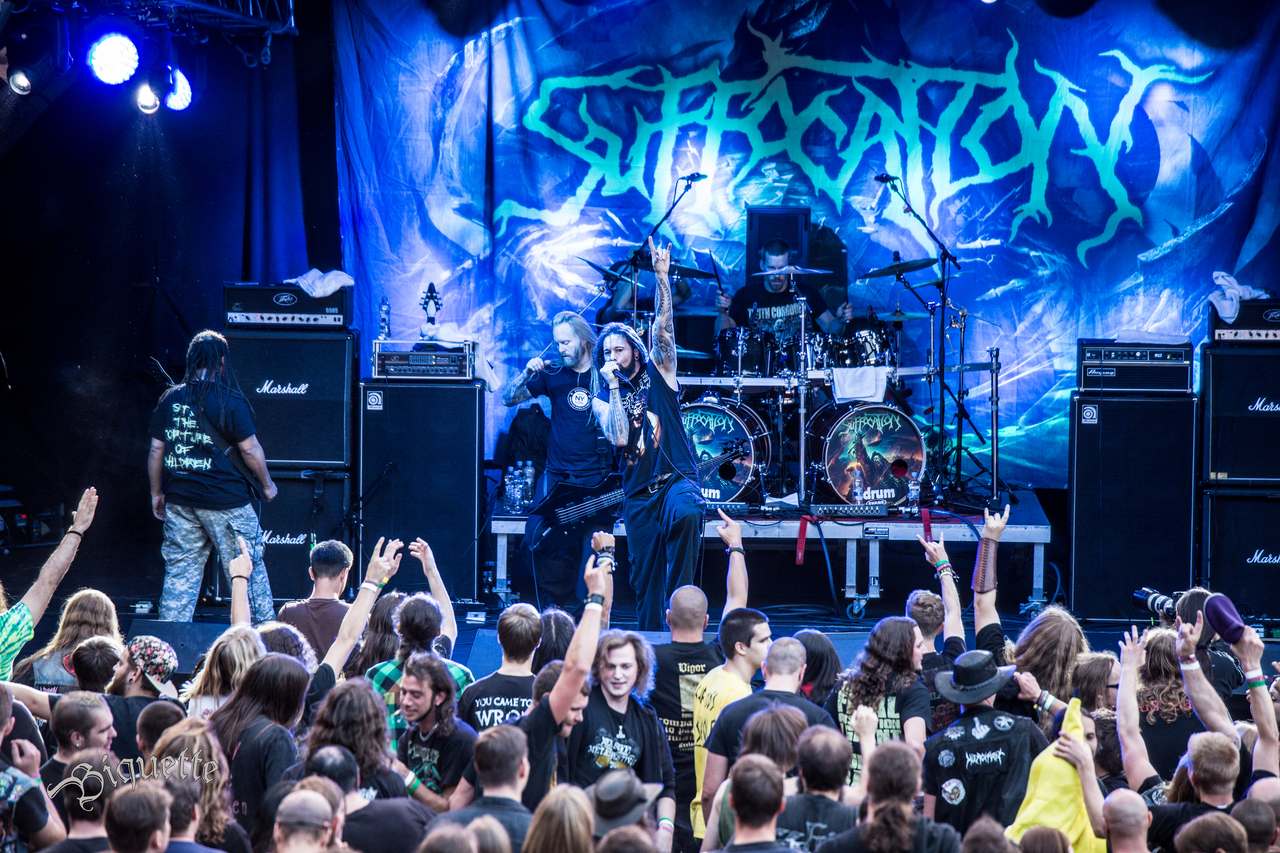 I saw Suffocation a few times in the past and they always delivered an impressive full blown brutal death metal show. This day was the first time when I saw them without Frank Mullen on vocals. Ricky Myers is the touring vocalist and he doesn’t sound anything like Frank and I’m sure he doesn’t try or want to. However because of the that the songs sound diffent, not necessarily in a bad way, but still not what I expected. 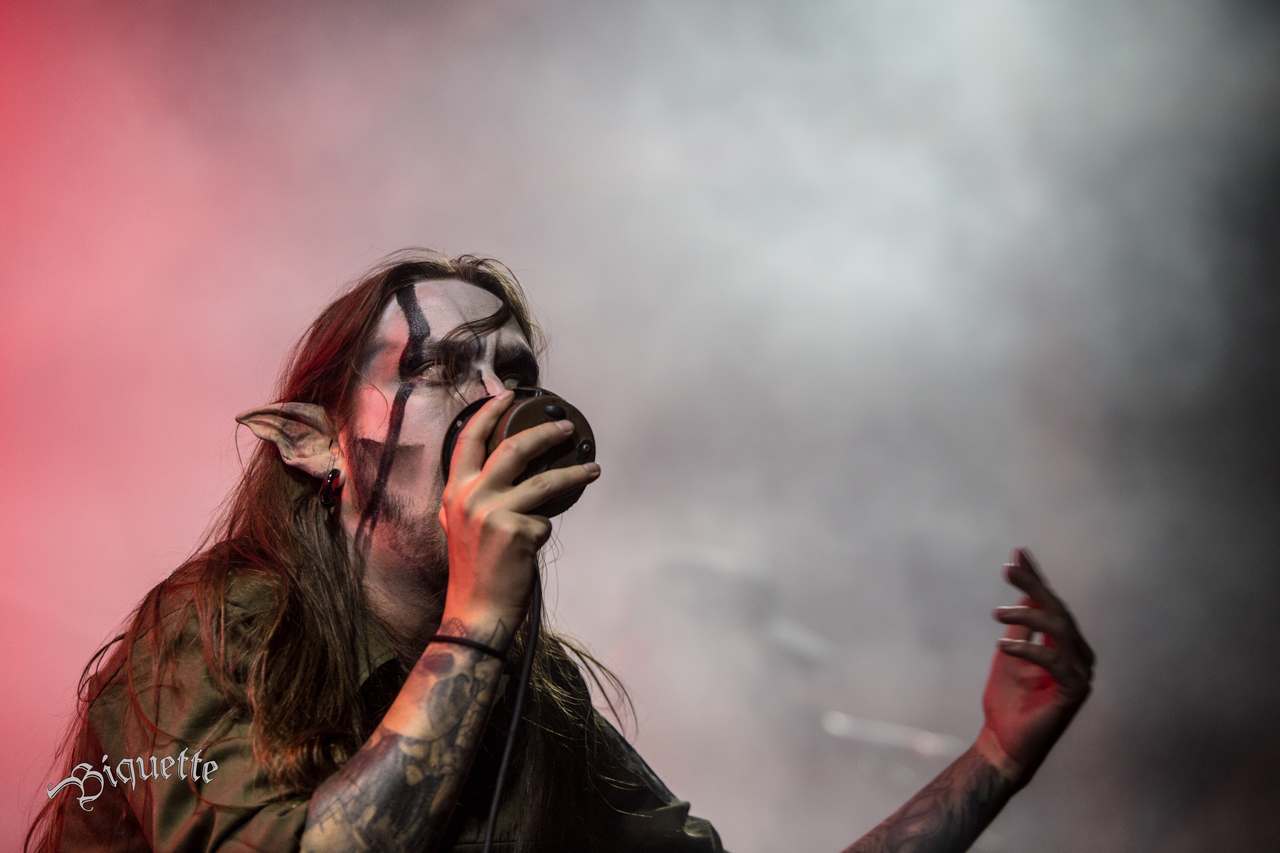 I could see through the plastic windows of the beer tent that Fintroll got a big and cheerful audience. Not my cup of beer tho. 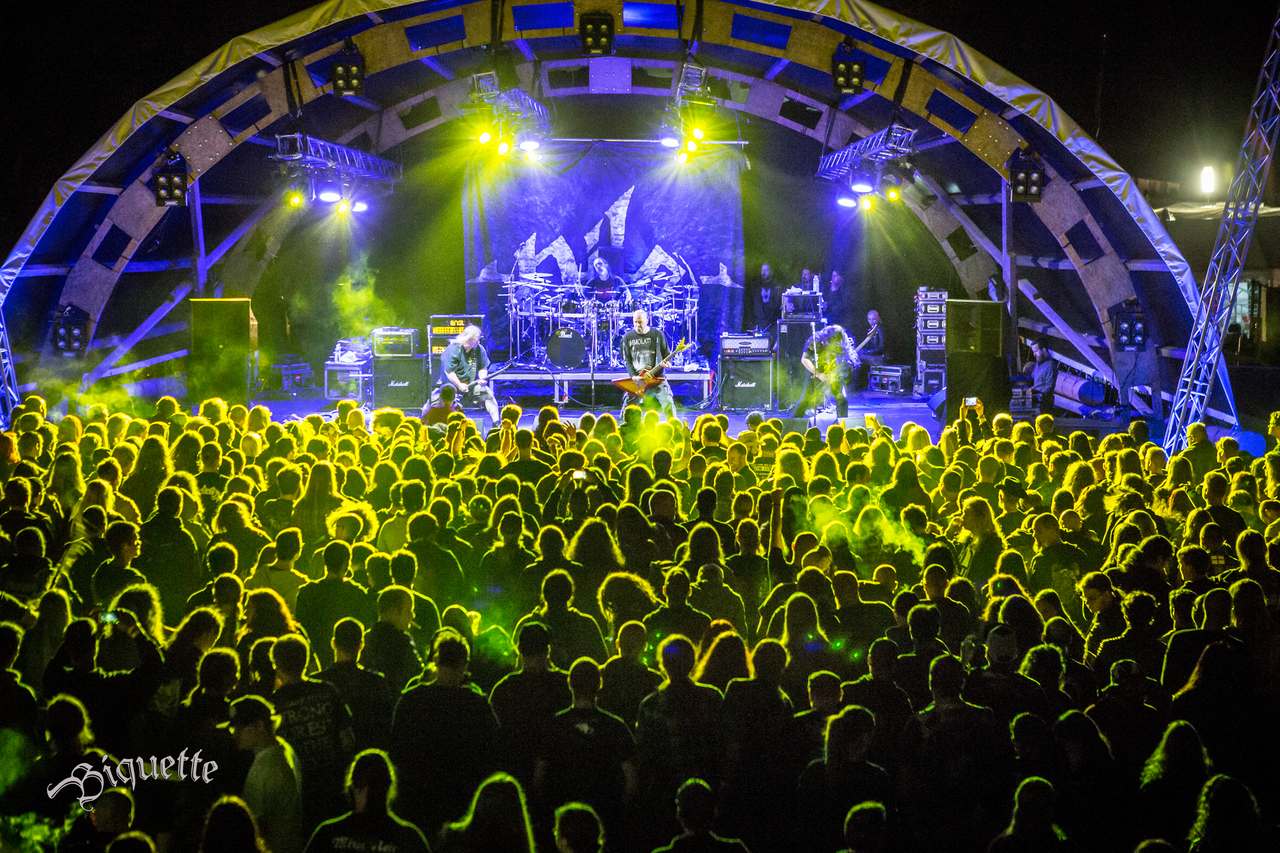 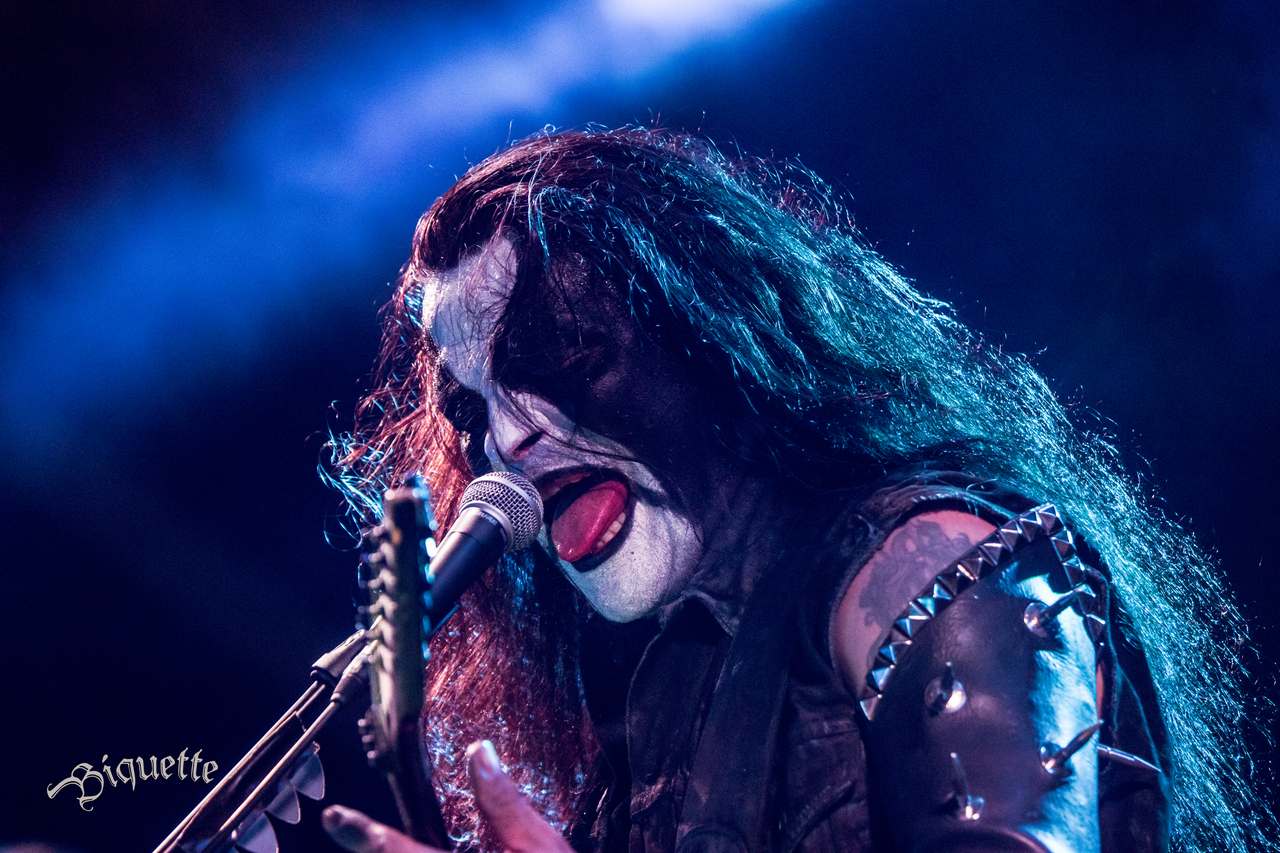 Is there anyone who hasn’t heard about Abbath or Immortal? As my friend who has met Abbath and King ov Hell in an airport, after the fest, on the way home, recalls, even the barmaid wanted her picture taken with them. Although one norwegian kid at the same bar said he never heard of the bands. At which point Abbath imediately proceded to fix the situation by signing his skateboard. That’s right Abbath, bring them into darkness One by One! 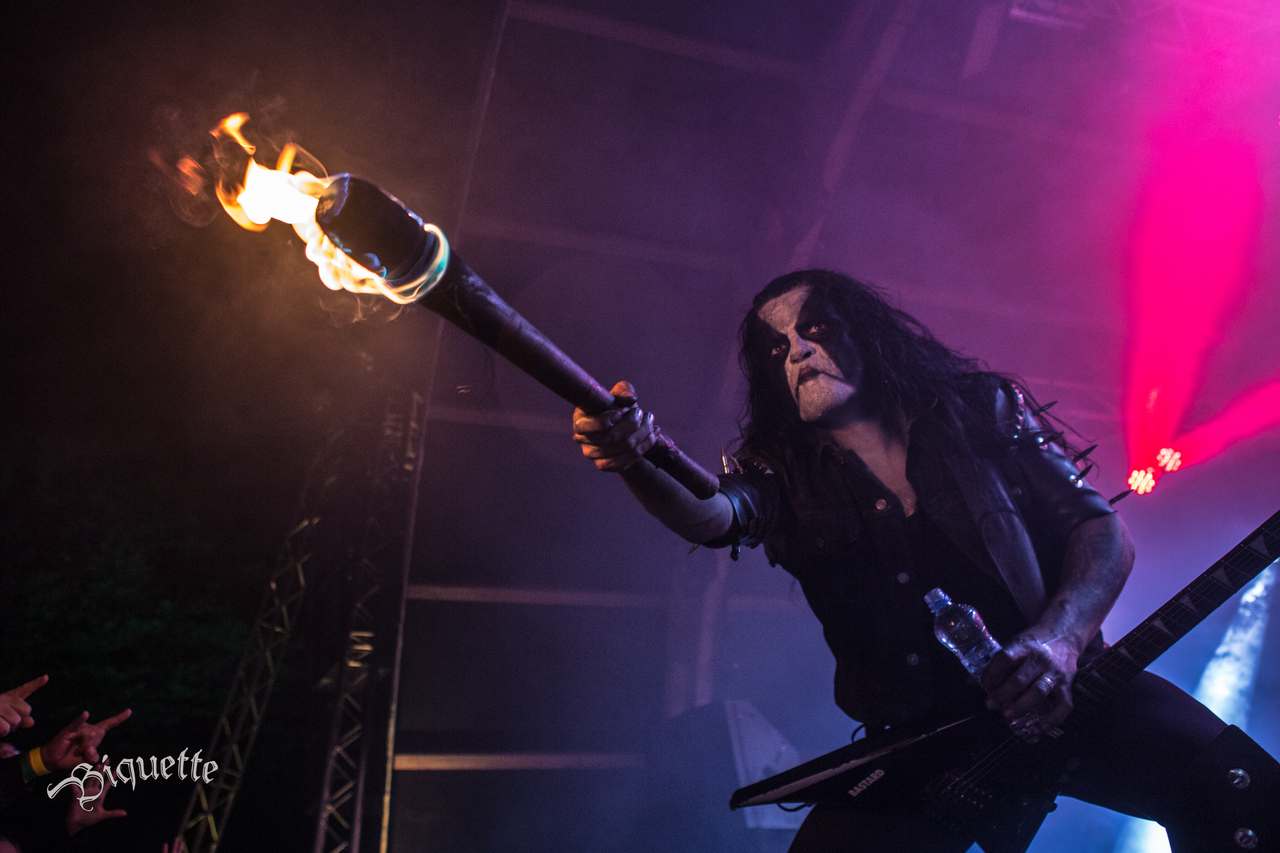 It’s always an enjoyable experience to see Abbath play live. Even if his playing is sloppy at times, you’re always guaranteed to see some firebreathing. Together with King ov Hell, best known from Gorgoroth, they play mostly Immortal songs, but they also play songs from Abbath’s past solo project I.

By the time they started playing In My Kingdom Cold, the weather gave in to Abbath’s commands and the rain they brought from Bergen, Norway started pouring all over the festival grounds. 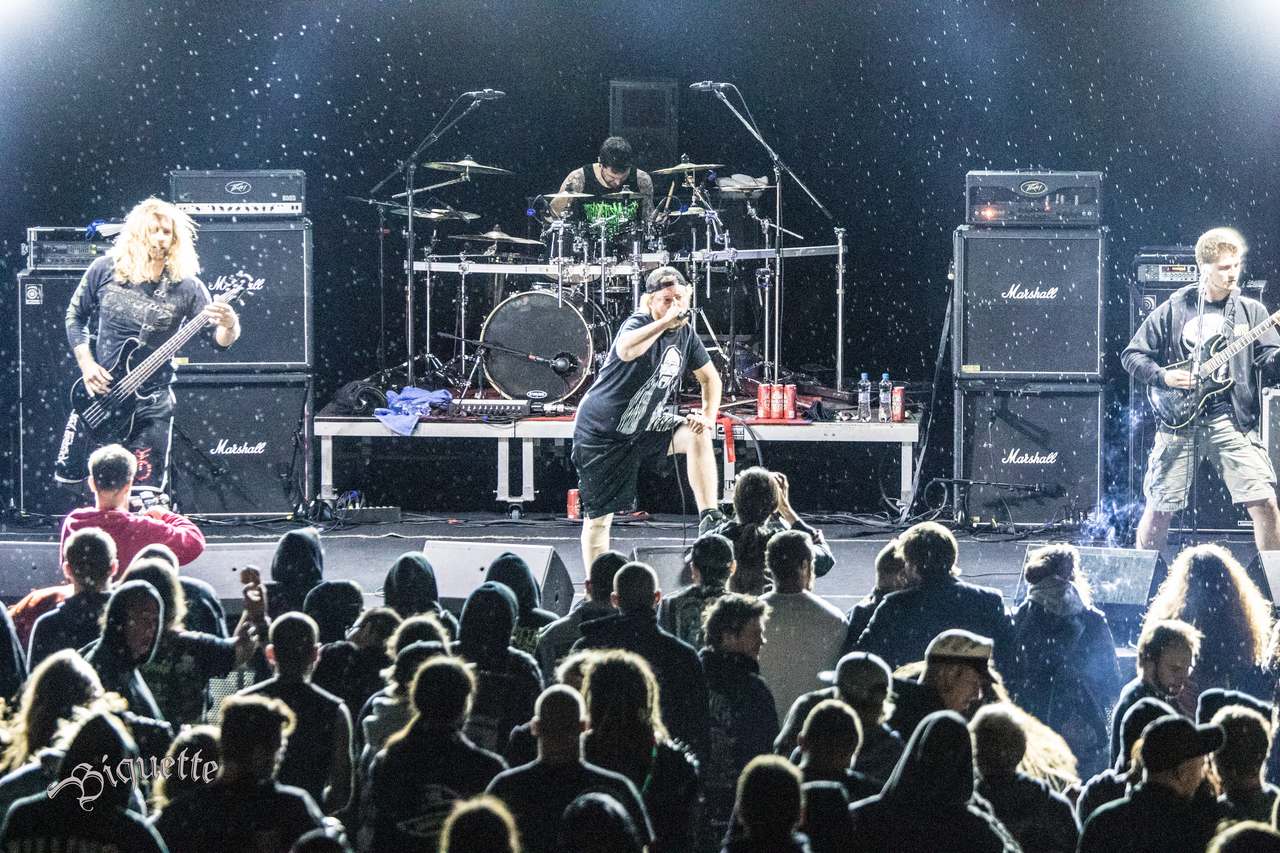 I thought Female Nose Breaker is gonna be all about feminism and female empowerment. Jokes aside, to this day I have no idea what that was all about, but it sounded and looked like the guys were having fun on stage.

After a quiet night in the festival camp, I went back to the stage area in search for breakfast. As the croissants are not my thing I settled for a beer in the hopes that the real food stalls will open soon. 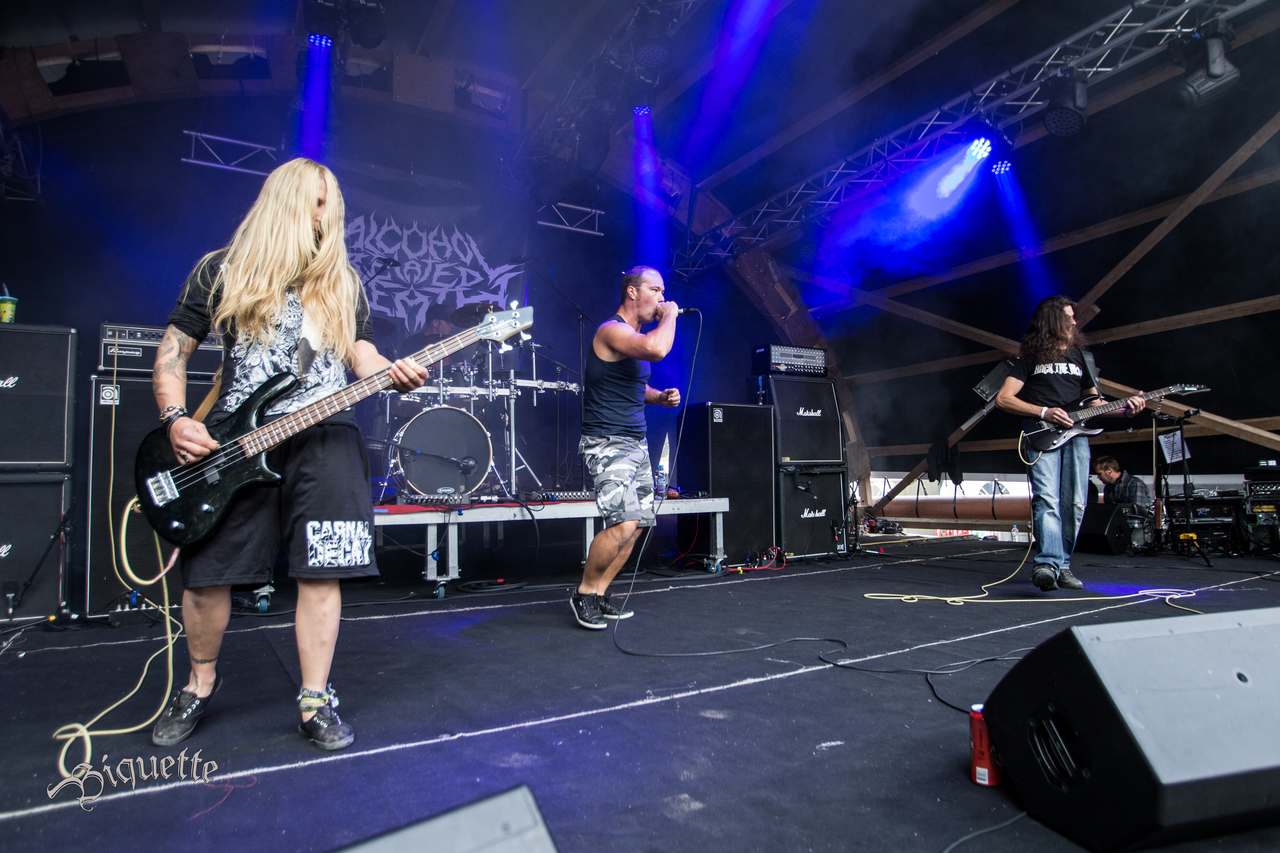 The first band of the second day was Alcohol Related Death. They play your usual death-grind with pig squeals and even frog ribbit vocals. It was an entertaining first band. 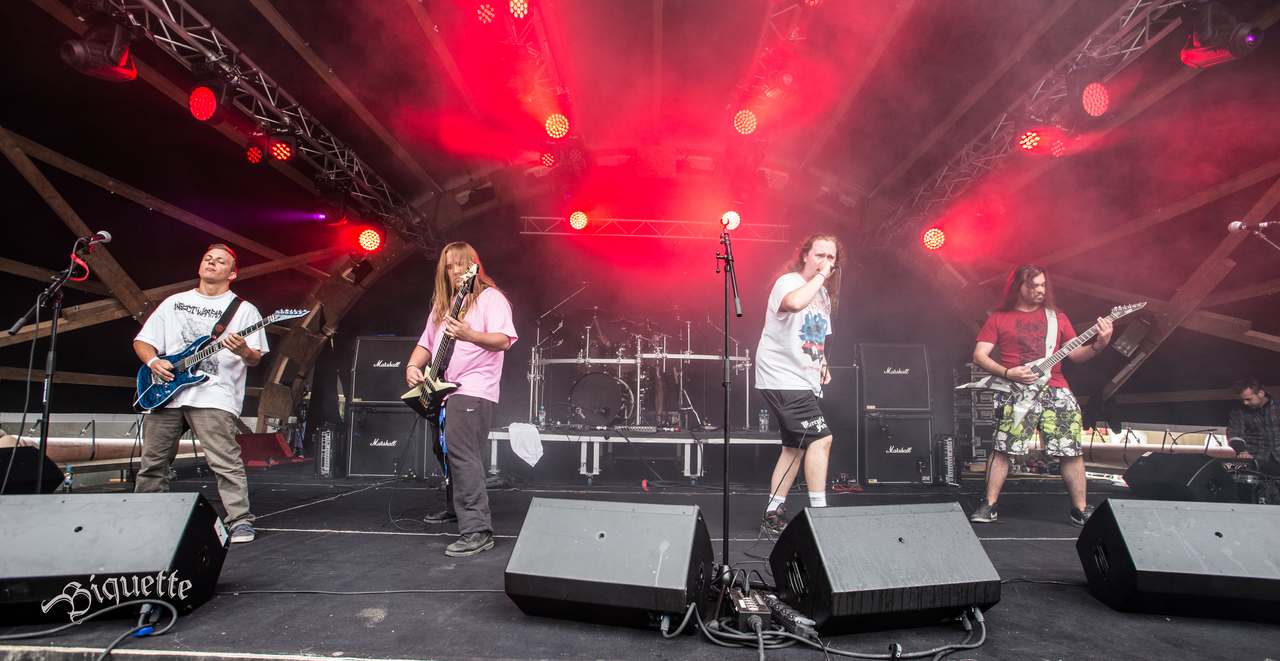 Petrol Patrol played a reasonable thrash metal which was ok for a lazy Saturday afternoon, but it became monotonous and predictable after a while. Just when I was thinking that the show is pretty uneventful, I realized I like surprises especially when they come in the form of a Pestilence cover – Land of Tears. 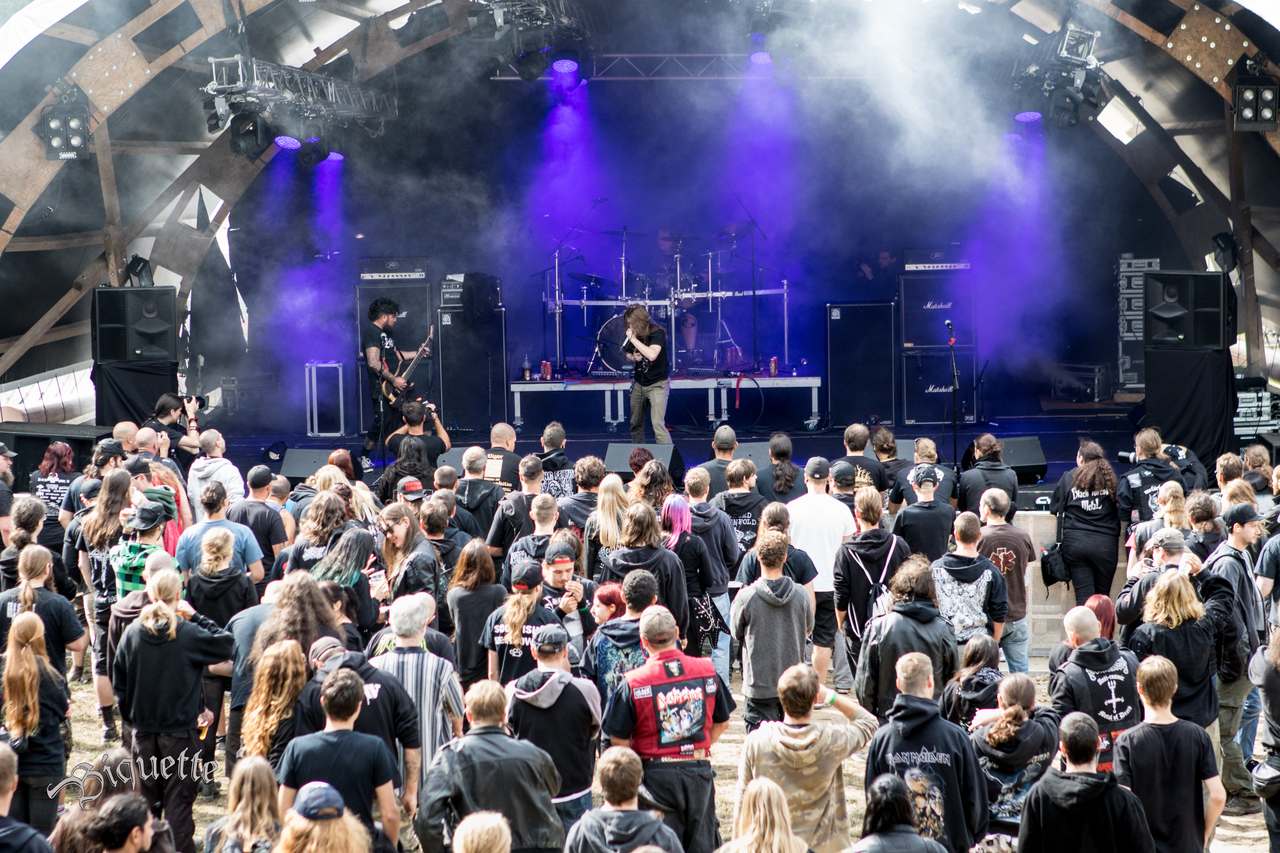 I never heard about Rottenness before seeing them that day. Their tequila driven brutal death metal and grindcore coctail was fast and varied making for a good change of pace. They handled out shots of tequila to the crowd and proclaimed the sun is awesome. Can’t say I agree with that statement, but I liked everything else that was happening on stage. It was one of the highlights of the day for me. 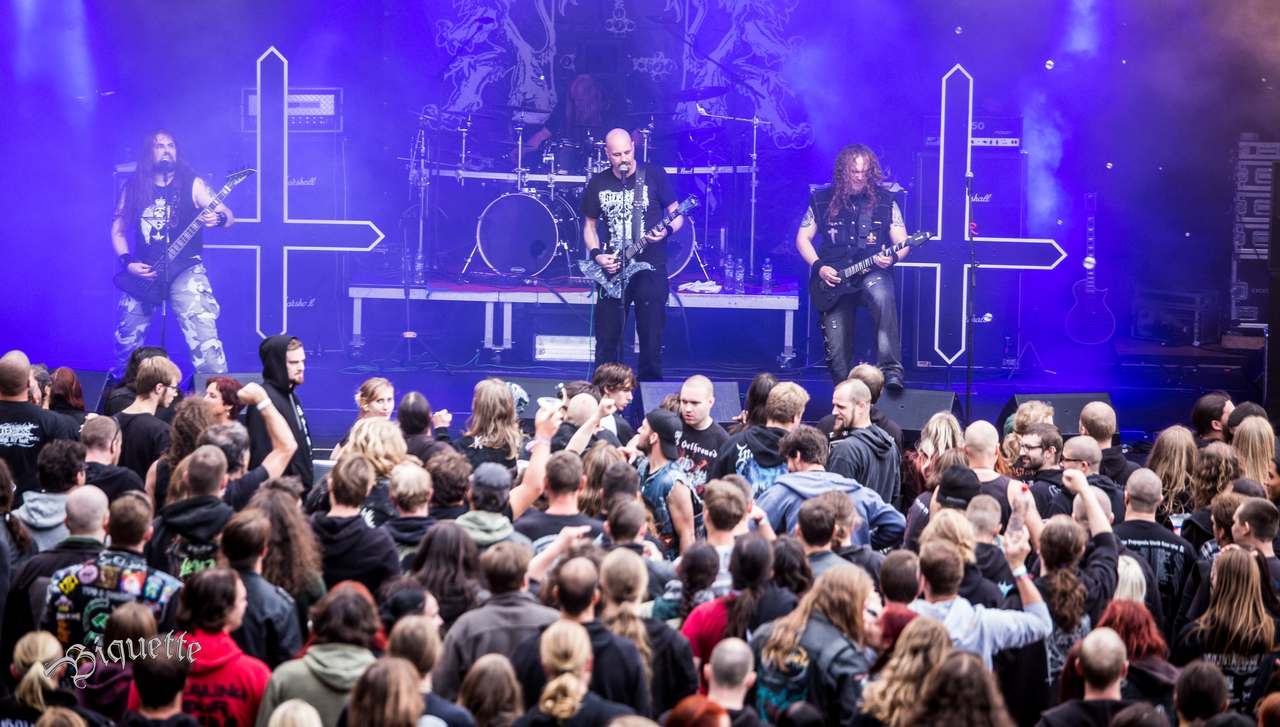 Felling refreshed after Rottenness I went for a walk in the beer tent and never made it out until God Dethroned started playing. I liked the few tracks the played before the rain started at which point I went to the tent to get more clothes as it seemed that a cold evening was approaching. 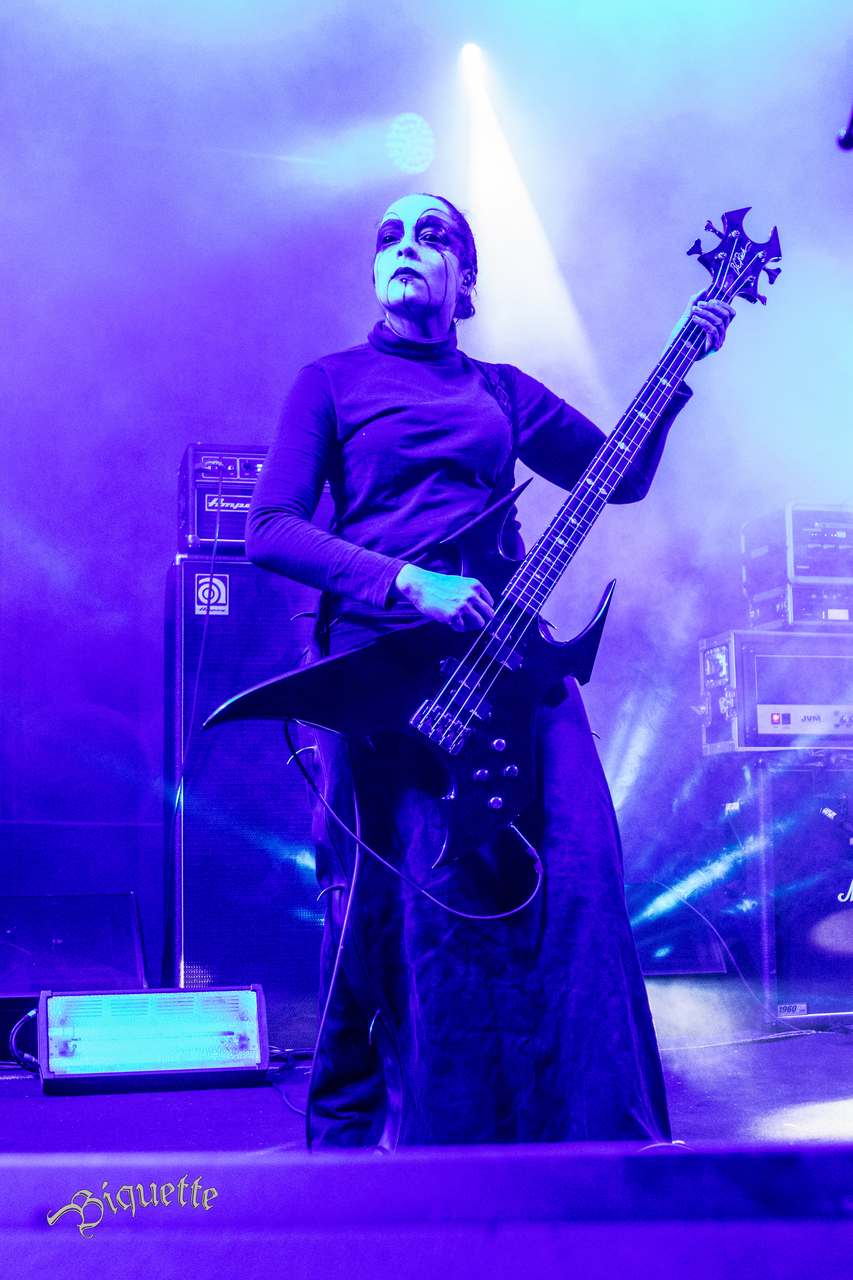 Space black metal from hell (or the nearest black hole) descended upon Meh Suff!’s stage. It was called Darkspace and it came in the form of one female and two males of unknown species, but humanoid looking. I can’t think of anything that sounds like the music they play. It is clearly based on black metal, but the sounds they produce are definitely not of this world. I was the highlight of the evening for me and proof that alien encounters can at times actually end well for us humans. 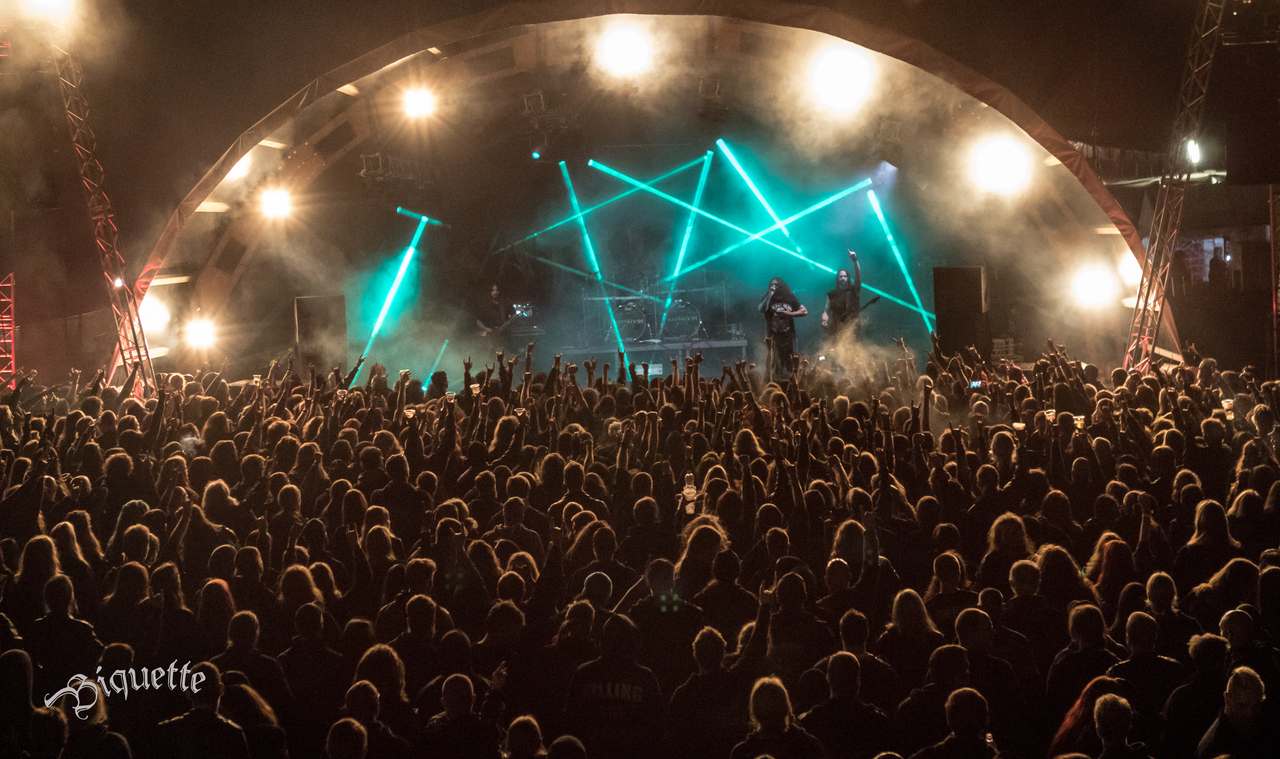 It’s just me or did Kataklysm started to use breakdowns even on the old songs which originally had none? I’ve seen Kataklysm a few times over the years and I used to enjoy them more. They used to sound more fluid live yet now there are a lot of stops in their performance. I was a little surprised, as going the metalcore route now seems kind of late to the party. A disaster of kataklysmic proportions or evolution? 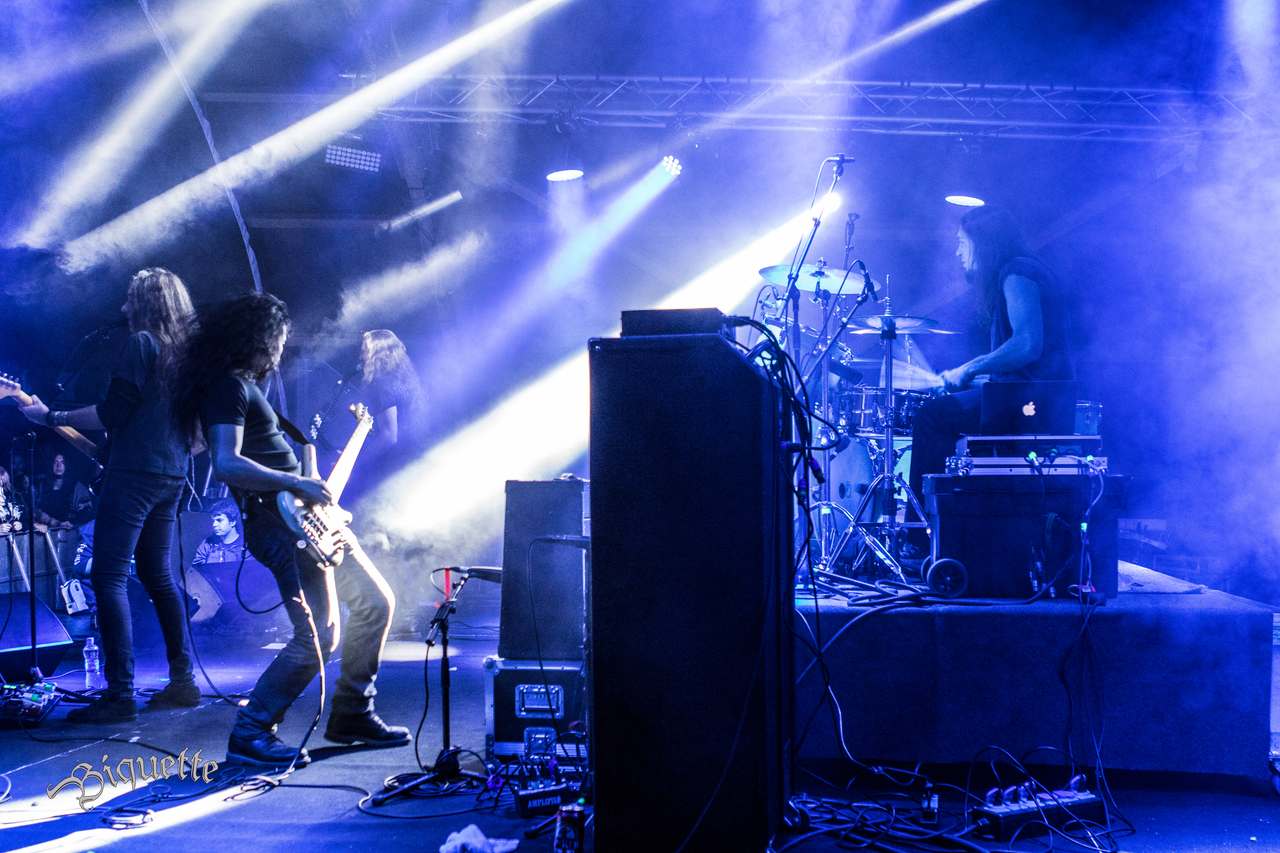 Next stop Alcest. With a target demographic as wide as the word of Jesus you’d think they could play anywhere, yet there they were, disturbing a perfectly brutal evening. Upon their arrival I immediately fled to the campfire zone, as the sound of silence seemed a better choice at the moment. It was a tranquil place where logs have been set on fire which immediately reminded me about the early black metal side activities. 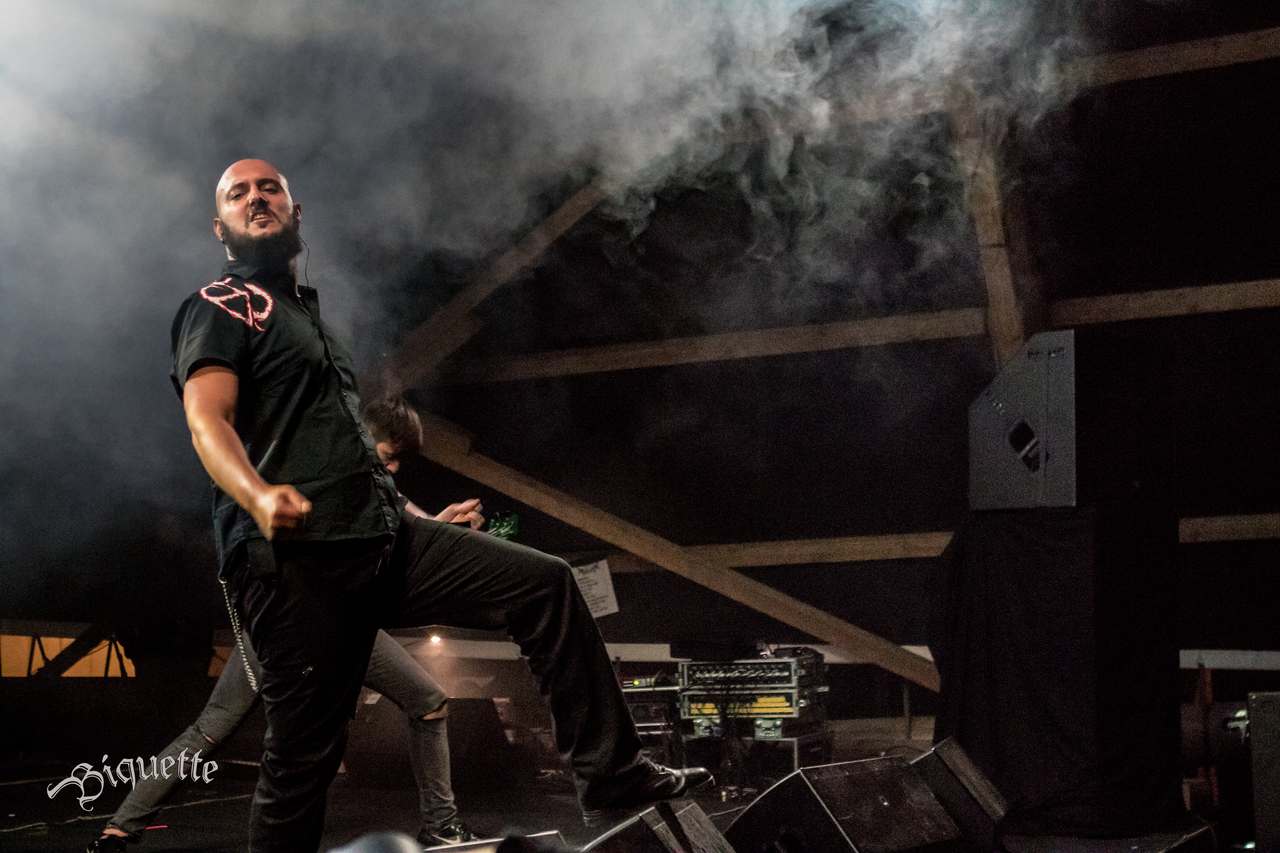 I wonder how the last band name came to be. In a twist of fate they decided to call that beautiful music a Hideous Divinity. I have admit it was a challenge to get more than a superficial opinion about this band. The music was complex and dense, my beers count was high and it has already been a long day. I’ll definitely have to see them live again in better circumstances.

Meh Suff! is a gem of a festival. Highly recommended for watching live performances, but don’t expect a big party carnival-like festival. It has more of an intimate and local feel to it and I’m glad I was there while it was still small and cozy.