Music Live – the UK’s favourite music-making event – celebrates its tenth anniversary in 2009 by teaming up with the country’s premier independent rock and metal festival, Hellfire this 6-8 November at Birmingham’s NEC. 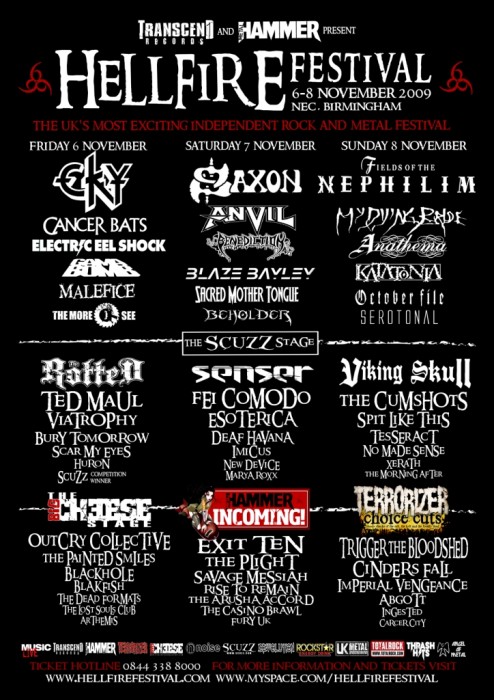 Designed to both educate and inspire visitors in their musical endeavors (however serious), Music Live annually showcases the world’s biggest guitar, amplification, drum and music production brands from Fender and Gibson to Roland and Yamaha. Seminar content regularly covers topics as diverse as making a career in the music industry and recording the perfect demo.

The joining of forces means visitors will be able to enjoy the massive Music Live equipment exhibition and Live Stage during the day, with Hellfire taking over the live area each evening to create an anticipated audience of over 30,000 attendees. A total of four stages will play host to around 100 live performances throughout the weekend; joint tickets for both events will be available at discounted rates.

The inaugural Hellfire Festival, held at the Islington Academy in February 2009, enjoyed sell out crowds and boasted a line-up including Exodus, Overkill, Firewind, Breed 77, Sabbat and Warrior Soul to name but a few. With a reputation for featuring both breaking bands and established acts, Hellfire is at the forefront of the Rock and Metal scene. And with previous Music Live stars-in-attendance including Chad Smith (Red Hot Chili Peppers), Kerry King (Slayer), Matt Tuck (Bullet For My Valentine), Duff McKagan (Velvet Revolver) and Rick Parfitt (Status Quo), visitors to this year’s ‘crossover’ event will be treated to more exciting live shows and big-name meet-and-greet sessions than ever.