Flight Of The Valkyries

Flight Of The Valkyries Lineup

St. Paul, Minnesota — SwordLord Productions is proud to announce the 2009 FLIGHT OF THE VALKYRIES (FotV) festival – the premier festival in the US for metal bands with female lead vocals.

The 3rd installment of the annual metal festival will be held Saturday, June 27, 2009 at STATION 4 in downtown St. Paul, Minnesota and will feature bands such as Sirens of Titan, Hydrogyn, Todesbonden, Luna Mortis, headliner Benedictum. 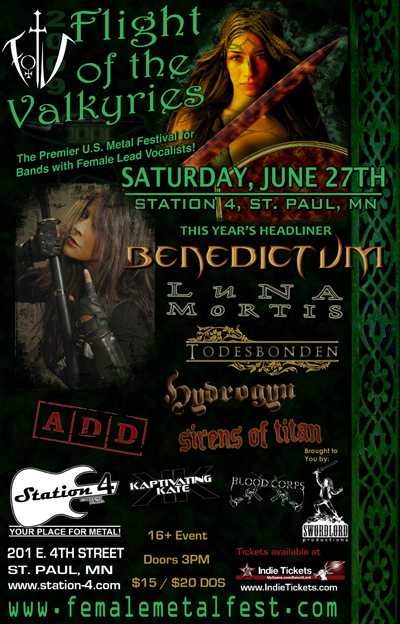 Flight of the Valkyries is the first annual music festival of its kind in the US devoted to metal bands with female lead vocalists. The festival, which debuted in 2007, showcases all metal sub-genres with the only unifying factor being that a female vocalist obviously must front the band.

St. Paul, Minnesota — SwordLord Productions has announced a new age policy for the 2009 FLIGHT OF THE VALKYRIES (FotV) festival – the premier festival in the US for metal bands with female lead vocals.

A new 16+ age policy has been put in place for 2009 and future FotV festivals. In past years the festival was limited to those 18 and older.

The festival will now also permit those under the age of 16 to attend the festival provided that they are accompanied by a paying parent or guardian.

“We wanted to provide the opportunity for the younger generation of metalheads to be able to share their love of metal music with their parents and vice-versa,” explained Flight of the Valkyries co-founder Bobbie Dickerson. “Previously several of the St. Paul curfew laws prevented FotV from opening up the festival to a broader audience, but we have discovered legislation that allows those over 16 to attend shows until 12 midnight. Those accompanied by a guardian are obviously in their guardian’s care no matter what the time of the show. In light of these factors, we could see no reason not to open the festival to more fans.”