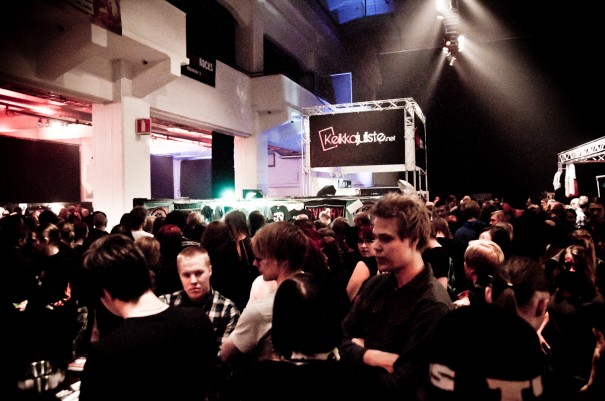 With all the major live events being cluttered for the summertime, there is both an absence of and a demand for metal get-togethers like the Finnish Metal Expo during the darker half of the year. It remains the only big festival-like wintertime event in Finland apart from the cruises on the sea, such as Spinefarm’s Spinefeast at Sea and Radio Rock’s Radio Rock cruise.

The expo has traditionally had one single stage for live shows plus an additional side stage for demo bands, guitar clinics and interviews, but in 2012 both of the two stages were reserved for signed acts. 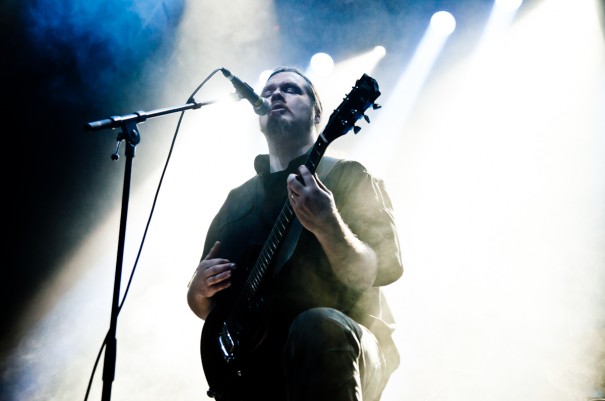 ICS Vortex, the solo band of Dimmu Borgir‘s former bass player with the same stage name, played its very first live appearance at this year’s FME. The band’s only studio effort to date titled “Storm Seeker” is some kind of groovy rock that raised some curious eyebrows but didn’t really take off. It apparently wasn’t enough that the music was flegmatic, but Vortex spent a fair share of the time between the songs to ramble stories about the songs, like which of them was about his old car and so forth. Not an entertaining show for those that hadn’t taken the time to familiarize themselves with the album beforehand.

The fair area of FME used to be a fun area to hang out during uninteresting bands, but it’s been gradually cut down year by year. Be it the lack of interest from the consumers or exhibitors side, the event has heavily geared towards being more of an indoor festival rather than an actual Expo that used to offer much more than just live shows. Yes, the major record labels and festivals were still present with their offerings in 2012, but there was very little buzz besides the shows apart from some of the more popular signing sessions (Stam1na, Turisas..). 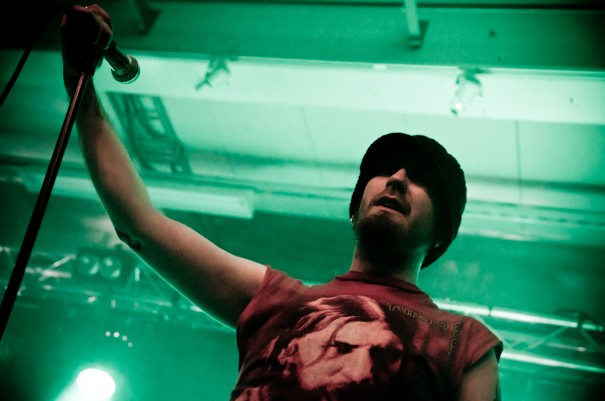 Swallow the Sun recently came out with their new album “Emerald Forest and the Blackbird” and was the crowd magnet of the second stage. They’re one of those bands you either get or don’t, and I personally have never got a kick out of their long-winded delivery. Despite having Kai Hahto behind the drum set, Swallow the Sun shows offer no fast rides but downright depressing funeral mood, and this set was no exception. Mikko Kotamäki’s (vocals) choice of headwear was no surprise either, as that piece seems to have grown attached to his head already sometime back in 2007. But I’ll forgive that, as the band’s intro tape Sininen Uni, a classic Finnish lullaby, was a fabulous choice.

Drinks were well available near both stages to be consumed during the shows. Also, a hangout bar located a little off was crowded and in addition to drinks serving proper food for those that were ready to pay a little premium to avoid the stands serving burgers and fries. Beer was priced at 6 EUR and cider was 7 EUR, plus a 2 EUR deposit per cup or can. Typical sky-high festival pricing.

The fair area and the second stage were shut down both days at 11PM and the audience was guided to the main hall where the main stage is located. Paradise Lost and Edguy played the two last shows of Friday at the main stage. 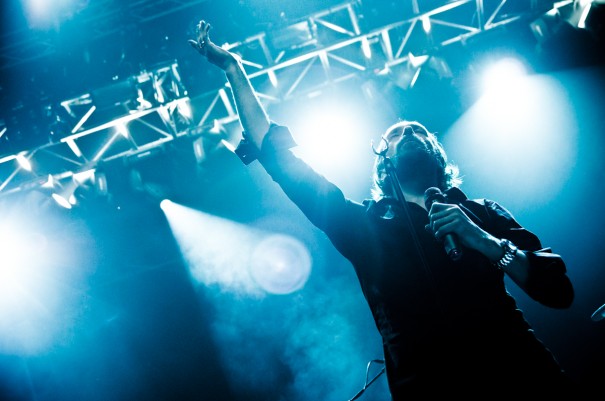 Is Paradise Lost seriously still a relevant band? I must have lost track of them when they completely changed their style for the third time, but apparently they’re still around and doing records. Good for them, but the age seems to be getting into them slowly, judging by their late night performance. “As I Die” was met with mild cheers, but overall it looked like I wasn’t the only one thinking that this routine set would hardly be something anyone would remember a week later. 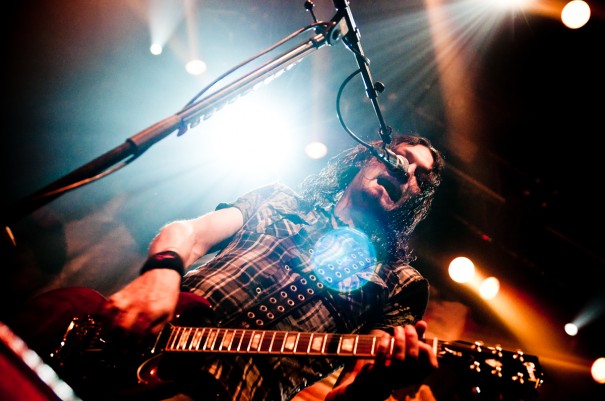 Edguy was the headliner of the day, and pulled off their show with completely different energy levels than Paradise Lost. Led to the stage by Tobias Sammet, an Entertainer with a capital E, and opening with “Nobody’s Hero”, Edguy showed why they’re in the top tier of their own genre. While the German approach to power metal might not be the most interesting style of music there is, excellent showmanship combined with catchy tunes is a mix hard to resist.

The crowd turnout for Friday seemed rather weak which probably had a lot to do with the lineup that was simply not in proportion with the 35 (adv) / 40 (door) EUR ticket price. According to a press release a total of 3800 metal heads attended the Expo during the two days, and the Saturday seemed slightly more crowded. 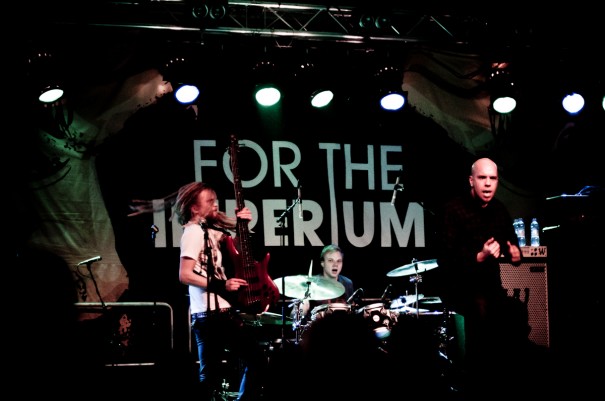 Is For the Imperium‘s music complex for the sake of being complex? Probably. But it doesn’t take away from the quartet’s exceptional talent to play their extremely technical and chaotic metal/pop hybrid. The band was doing all they could to get the curious crowd going, but their song material gives out fairly little to catch onto on the spot. “Breathing Life in You”, “California Girl (Born ‘n Raised)” and “Pike River” would be more potential sing-a-long tunes with slightly less all-over-the-place arrangements, but the band has obviously made a conscious decision to walk down this path. However, the band’s energy was duly noted and their playing abilities must have dropped a dozen jaws, so they certainly managed to convert new fans to make the next time around even better. 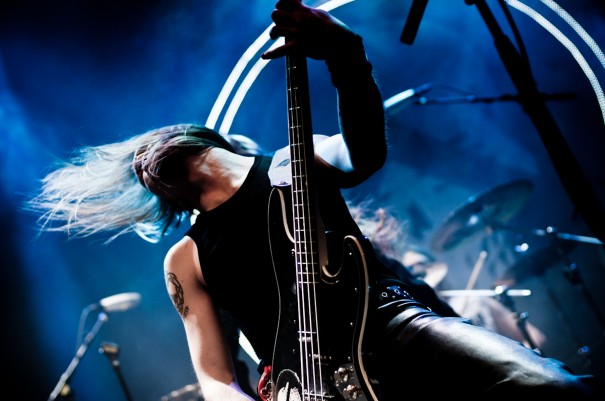 Amoral switched over to a more melodic sound in 2008 after parting ways with their growler Niko Kalliojärvi, who was replaced by the 2007 Idols winner Ari Koivunen. This is something that was – and apparently still is – very difficult for the band’s old fanbase to cope with. The reception to Amoral‘s show on the main stage started almost painfully cold. A lot of curious minds showed up, but only to greet the band with no enthusiasm whatsoever. The band seemed like outcasts on the stage, performing a short set of 4 tracks from the Ari-era and an older cut, “Mute”, which Ari can pull off nicely.

Ari is a good clean singer that can also handle deeper growls, and the band’s instrumentalists are exceptionally talented musicians by any standards, but “the new Amoral” never really got a fair chance after their U-turn. The band’s latest album, “Beneath”, is actually half-decent if you can see beyond the band’s past, and Amoral‘s live performances have always been fun to watch. “Won’t Go (Home)” and the set-opener “Beneath” were both good examples of well composed and executed melodic metal. Still, the band no longer has that primal aggression that made their old lineup so great. Towards the end of set the crowd did warm up to at least politely clap between the songs, and perhaps Amoral even won over some new fans after the rocky start. 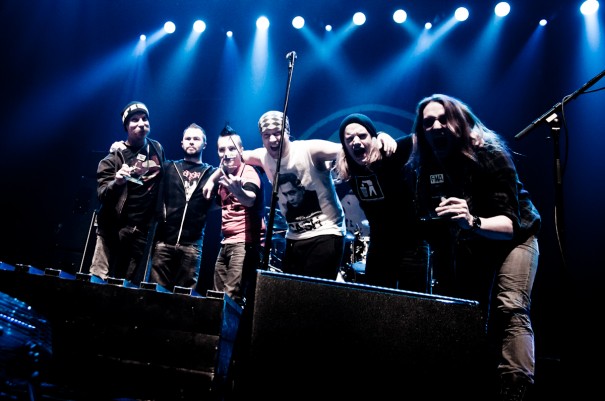 The Finnish Metal Awards winners are announced annually at the FME, and selected through a public online vote. If the intention was to do a seriously credible award ceremony where each category would actually go to the year’s best effort, a better way to do this would be to gather an extensive jury of industry experts to objectively cast their votes to decide the year’s truly best.

Year after year the results show that the band that manages to engage most of their fans to fill the online voting form, cleans the awards table from trophies on nearly each category. Turisas fans were the most active and thus most prominent on this year’s 20,000 voters, and so they took down the Band, Album, Vocalist and Album artwork of the year categories. 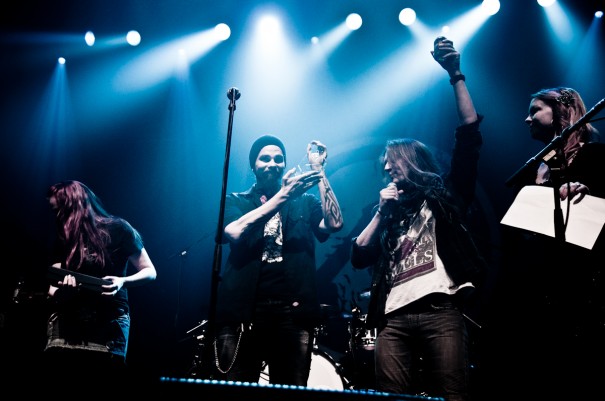 For the top 10 of each category, see the full results. 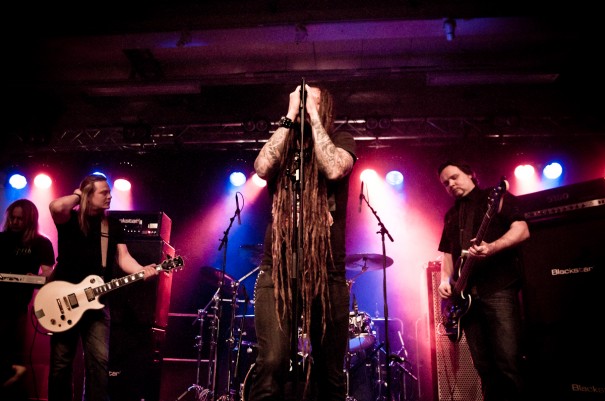 Sinisthra is Tomi Joutsen‘s second band that he founded already in 1999, well before joining forces with Amorphis. The band is fairly unknown in Finland, but had still nailed a late night Saturday slot on the second stage. It’s no news that Tomi has a great voice, but those who came to see the band for him, got only to witness Sinisthra‘s static and faceless performance with weak song material.

While all foreign Expo guests have not always really hit home for the Finnish crowd, there’s been at least one really good fresh booking each year. Last year it was the Norwegian Kvelertak, and this year’s positive surprise was the still relatively unknown, Italy’s own Fleshgod Apocalypse. 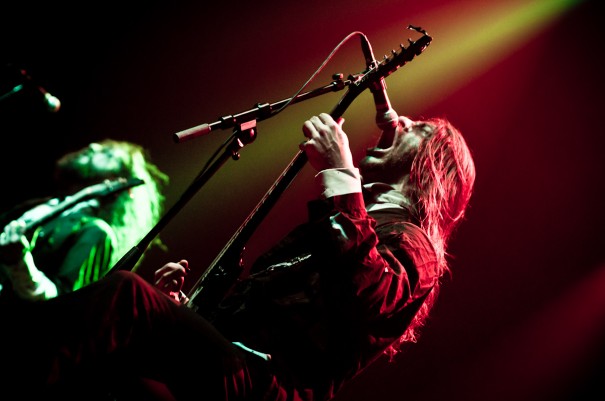 Think Behemoth, but more symphonic and with even faster drumming (really). The band’s first album “Oracles” (2009) is not bad, but “Agony” (2011) is one of the most important extreme metal releases by a new band in ages. The band’s fiery live delivery was on par with the intensity of the studio albums. And yes, it really appears that Francesco Paoli is no drum machine but the real deal. Fleshgod Apocalypse came, destroyed and played this year’s tightest show. 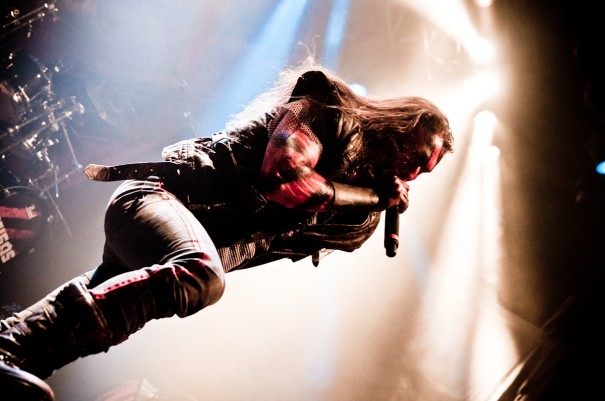 The award winners Turisas were up next. Sorry, but “Stand Up And Fight” was not even close to the best album of the year, and the band seems to have lost some of their momentum especially after having replaced Hannes Horma (bass) and Netta Skog (accordion) with two new members. The band’s live delivery was professional as always, but it hardly offered anything new to those that had seen the band before, except the lack of an accordion player that was now replaced by a keyboard player. The Turisas-boom seems to have calmed down, as there were significantly less fans wearing that black and red Turisas warpaint than around the release of “The Varangian Way” album.

Stam1na closed FME with the band’s career’s all time longest set, clocking slightly beyond the 90-minute mark. The band started their show by playing all the 10 tracks from their brand new “Nocebo” album that had just charted #1 on the Finnish album chart. Nocebo is a carefully crafted album, that remains faithful to the trademark Stam1na sound. Tricky riffs, catchy choruses and unorthodox arrangements drove the band’s typically energetic performance forwards, but perhaps one could spot a hint of nervousness in the band due to the entire album’s challenging live premiere. Nocebo was, however, still well delivered and well received. 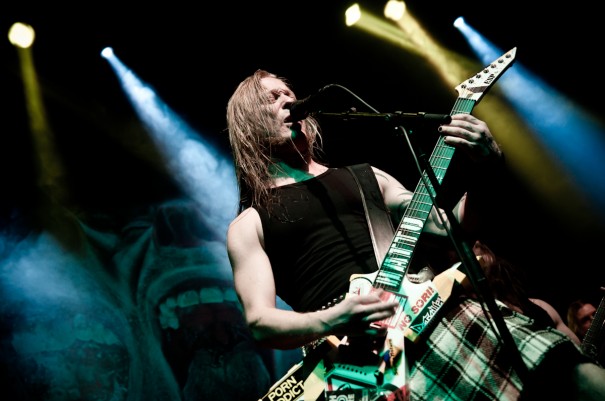 Prior to the band’s encore where they played a number of their older classics to close the show, two featuring a guest appearance by Apocalyptica‘s Perttu on the cello, the band was awarded with gold discs for Nocebo’s sale success by their record company Sakara Records.

With three gold records and headliner spots on several big name events, Stam1na has achieved pretty much everything a band of their genre in Finland possibly could. Stam1na has hinted having vague plans for world domination, and the band’s first post record deal track sung in English, “Nomad” from Nocebo, further suggests that they might be serious about taking their live shows outside Finland in the not-so-distant future. 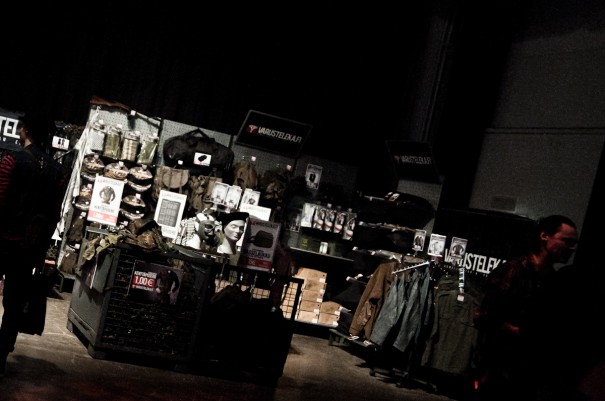 The more band-focused, new FME format of two stages is an improvement over the old format, but the Expo can remain a significant annual event for years to come only with quality band bookings. Why not try switching up a gear by booking bigger names, and perhaps even extending the event to 3 days?