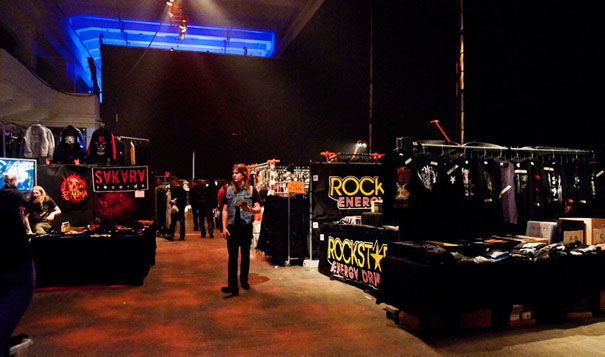 The winter is traditionally a silent time on the festival front, with festival organizations in planning mode, booking bands for their summer events and making sure everything is in order when the sun is shining again. However, the Finnish Metal Expo sheds some light to the dark winter in Northern Europe, by bringing together many European players in the metal music industry to Helsinki’s Cable Factory. As much as the event is for the fans, it is also connecting point for the industry people. 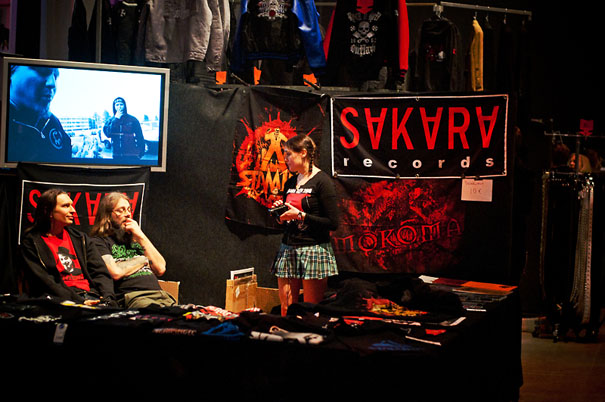 In addition to live shows at the main stage, Finnish Metal Expo offers a large fair area with plenty of stands set up. There’s people handing out flyers and CD samplers, different kinds of competitions and signing sessions, and a whole lot of stuff to buy. All this topped with exclusive expo offers on festival tickets, CDs, band merchandise and clothing totally makes the fair area worth a thorough visit. Paying with a card can be problematic, and the closest ATM is so far away that it is a good idea to bring a lot of cash as you’re likely to buy a little this and that impulsively. 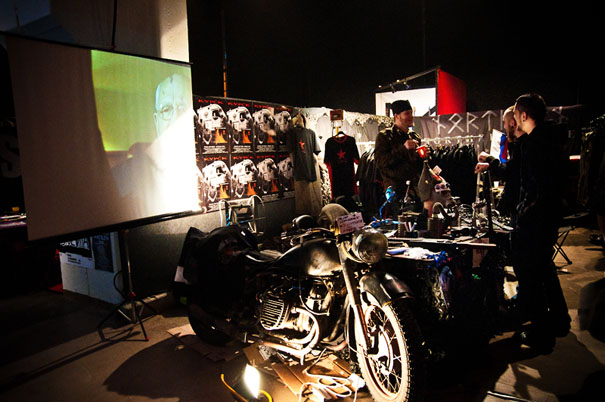 Spinefarm Records boasted the coolest stand of the year, connected with a small stage of their own where an acoustic cover band attracted more people to the check out their stand. Several equipment manufacturers offered a chance for curious people to get a feel on their flagship models. Weak point on the FME is definitely the offered food. Without an access to the VIP restaurant bar, there´s year after year been very little to choose from, other than hot dogs and the like. Thankfully, it is allowed to bring your own food. 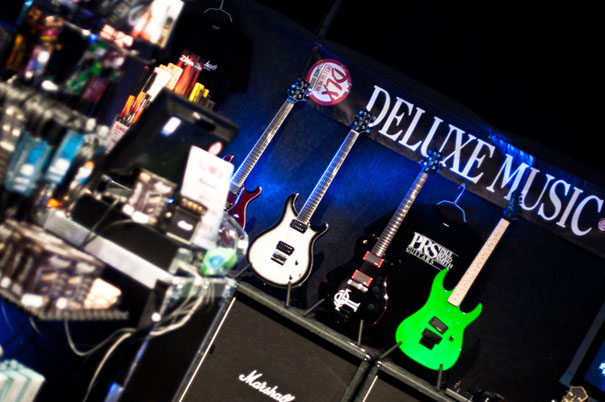 The beer was ridiculously expensive at 6 EUR, and served in plastic glasses with 2 EUR deposit. So yes, you need 8 EUR to buy one beer. Regardless of the pricing, the bar area near the stage, as well as the other one at the fair area were both typically really packed.

Finnish Metal Expo has just one stage in a large hall. This means there’s always plenty of time to wander around the fair area during the changeovers between bands. Deathchain had been placed as the first band on Friday, supposedly to attract as many people as possible to come in early, as the bands on the following slots do not quite have a fanbase of the same proportions. However their start was already during office hours, which made it impossible to be there in time. 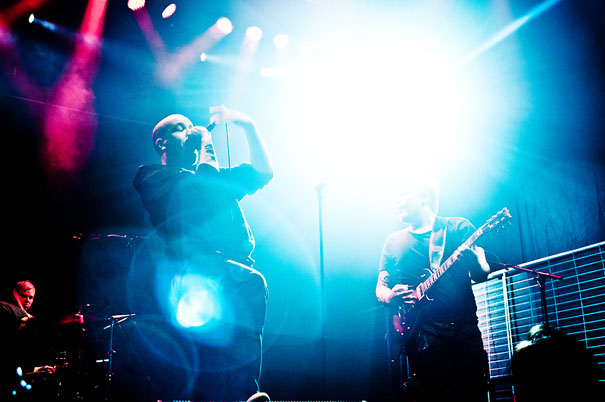 The following interesting act was For The Imperium. I will not be the first, nor the last person to call them Finland’s own The Dillinger Escape Plan. The name of the game is a mashup of a million different genres. The outright chaotic songs are extremely technical, and delivered with a million tempo changes and both clean vocals and growls. Definitely worth a spin if you’re into weird stuff, and the live show was super energetic and entertaining, too. The gig ender and their new single Pike River has a video available on YouTube. 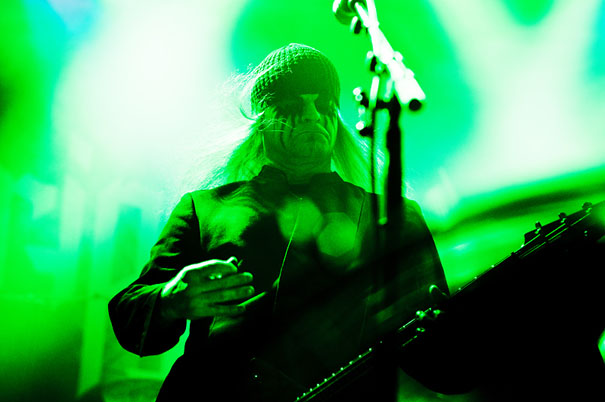 Tom G Warrior had a signing session at the fair area, before Triptykon took to the stage. They’re a no bullshit live band that lets their mammoth-like songs speak for themselves with a minimalistic live show. Their mixer did a fantastic job at getting the sound right in perhaps the most challenging venue in Helsinki, where it’s often impossible to hear all instruments in balance. Synagoga Satanae was the highlight of this solid performance. They also surprisingly played Messiah from Hellhammer. 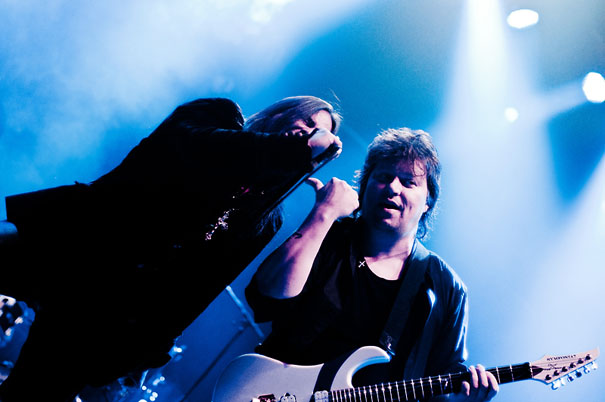 Symfonia, Timo Tolkki‘s new band, was one of the most awaited performances of the day, as the band has never played live before, or even released an album yet. Tolkki has gone through some tough times in the past years as we all have read from the media, so one can only hope he finds his peace of mind and has success with his new band. Symfonia‘s drummer Uli Kusch was unable to make it to the show, so Alex Landenburg filled in for him. 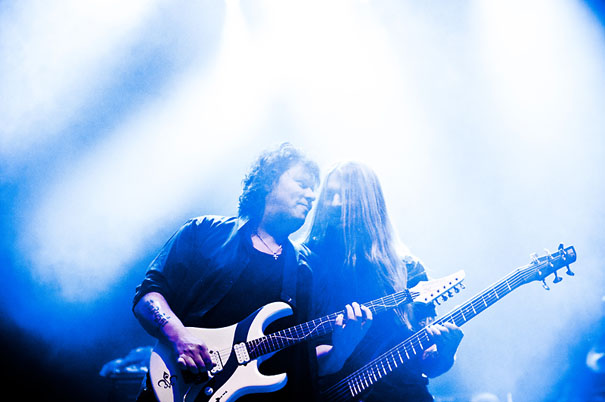 Other members of the band besides Tolkki and Kusch are Andre Matos (vocals), Jari Kainulainen (bass) and Mikko Härkin (keys), so it is no exaggeration to talk about a super group. Symfonia‘s songs were exactly what you could expect: something in the vein of Tolkki‘s new project Revolution Renaissance. Simply put quality melodic metal, but arguably nothing ground breaking. The band went through a bunch of new songs made for Symfonia, and also Dreamspace and Stratofortress by Stratovarius. Tolkki was doing great, apart from suddenly smashing one of his guitars really hard to the floor out of the blue. For a while it already felt like the gig would be over and we would have another Timo Tolkki disaster in the pipeline, but the gig went on normally after a change of guitar. To sum it up, Symfonia seems to be a promising band for Tolkki‘s fans. 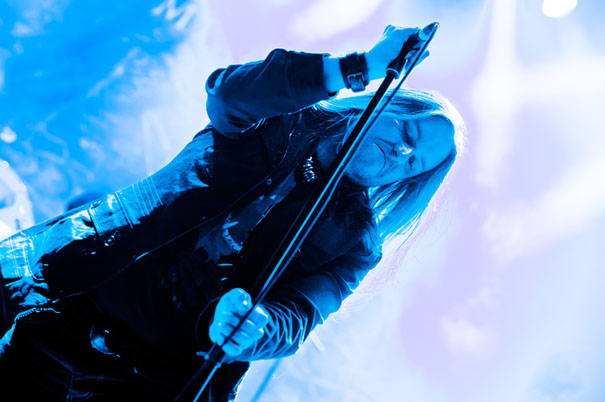 The Man-Eating Tree was one of the first bands on the second day. Put to life by Vesa Ranta (ex-Sentenced), The Man-Eating Tree delivers average atmospheric and melodic metal. The songs don’t really seem to go anywhere, although there’s some beautiful melodies in the mix. Not too many people were watching the performance, until more people start to come in to wait for the Finnish Metal Awards to start towards the end of the gig. Tuomas Tuominen on vocals is really not bad at all, but the band’s song material simply doesn’t get the crowd going.

After The Man-Eating Tree had finished up their set, the fan-voted Finnish Metal Awards were given out by Heta Hyttinen (Rytmi Magazine) and Niko Kaartinen (Imperiumi Webzine). 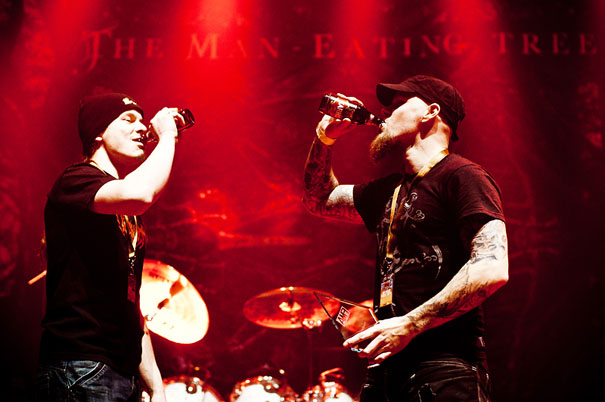 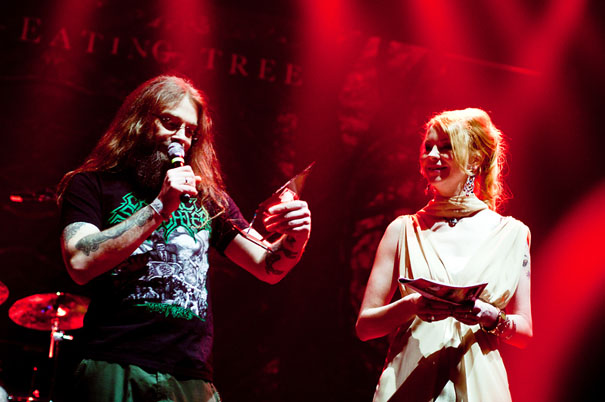 Stam1na‘s success was no surprise to anyone. Their thought-provoking “Viimeinen Atlantis” album was a commercial success and inarguably one of the highlights of the year. The band took the awards in their own, humour infested manner, with the band’s front man Antti Hyyrynen refusing to give a proper speech but just screeching like a seagull. 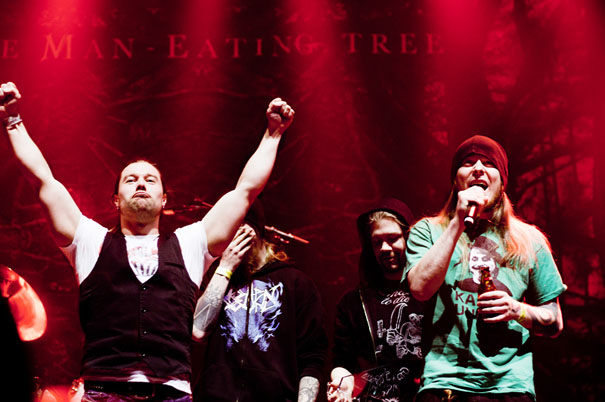 Bob Malmström and Disease Of The Nation have both made some name for themselves through some extensive touring in Finland’s tiny clubs and pubs, but the demo of the year still went to young blokes of completely unknown Frosttide. This is testimony of the faults of the model where public online vote determines the winners. Thankfully, it was promised that the awards would go through reform so we can next year expect something completely different, perhaps we’ll see a jury that will either decide the winners or have influence on the choice. 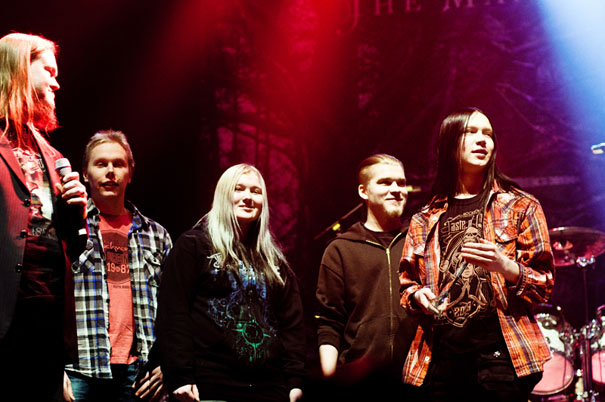 Truthfully there’s been very few interesting up and coming metal bands from Finland in the last couple of years. All of them seem to drown in the endless sea of mediocrity, which is a damn shame after years of unbelievable supply of skilled and innovative new comers. Battle Beast is a very welcome exception to this trend, and thankfully so. They do melodic heavy metal, with a bit of that warrior/folk touch ala Turisas in the mix. The band’s lead singer Nitte Valo has an absolutely phenomenal voice that’s seriously out of this world. The band’s song material is alright, but with a little more catchy choruses we would have the next big thing right here. Nitte has a great stage presence and somewhat of a trollish appearance which works great. The other band members can do their fair share of vocals as well, which makes the bunch both fun to watch and sound good live. 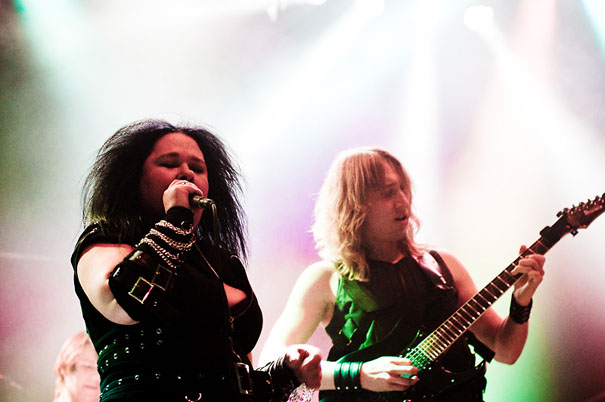 The Suomi Metal Star band competition was held at the small Valssaamo stage on the side of the Expo. The competition was won by ODDLAND over three other bands, and the prize was a record deal with Century Media. It looked like nobody could have cared less about a band competition of four completely unknown bands. Half a song from Artificial Heart (seriously?) was enough to pass on this competition. The tiny audience seemed to consist basically only of close friends and relatives like parents of the band. Metal! Not. On previous years Musamaailma was running interesting guitar, bass and drum clinics of big name artists on this small side stage. Hopefully we’ll see some of that again next year. 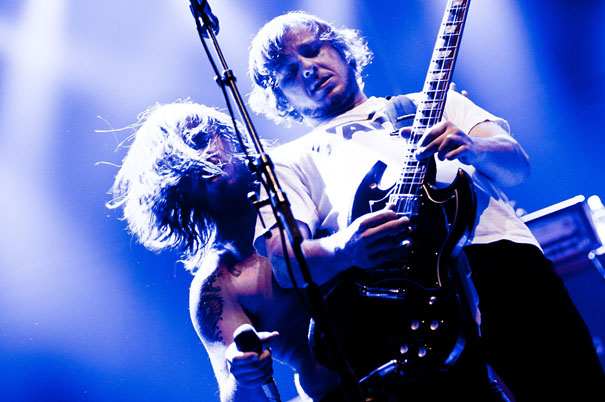 Kvelertak (Norwegian for Chokehold) is one of the hottest new bands right now, and their show pulled in a big crowd of fans. The Norwegian black’n’rollers have an unique sound that is an unorthodox mixture of punk, hardcore and black metal. It was fun to see that their live shows are primal and very groovy, just like their 2010’s debut album. Led by the three-strong guitar section of the band, Kvelertak‘s performance was very energetic and upbeat, and their catchy songs are perfectly crafted for a live setting.

Much like the Finnish Metal Awards, the Metal Expo could truthfully use a reform of some sort. The concept of the Expo does work, but the stands are pretty much the same year after year. It feels like the crowd turnout has been on a decline for the last few years, but perhaps that’s partially due to the booked bands, or just the fact that there’s not quite the heavy metal boom in Finland anymore as there used to be.