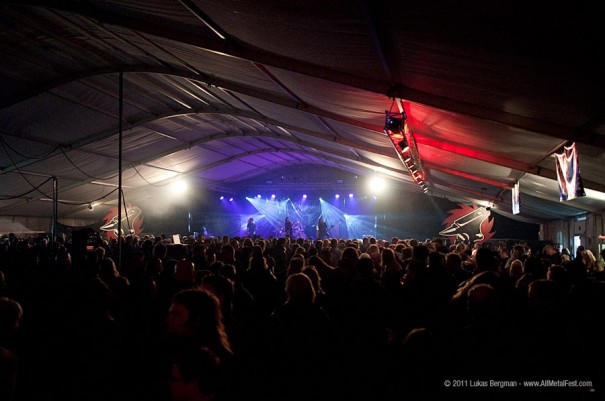 Dokk’em Open Air! After the fun we had last year (see the Dokk’em 2010 Live Report) it was time to head back to the North of the province of Friesland in the Netherlands for the 2011 edition of this fest. With the 2010 edition in mind, there were some changes in this year’s edition, being that the festival grounds moved to another meadow in the same middle of nowhere, and both stages were in a large marquee this year. Besides food stands and a metal market they even had a chair swing on the festival grounds and a mechanical rodeo bull with the illustrious name of Metal Henkie.

This year’s edition included bands like Hammerfall, Vader, Evergrey, Kampfar, Vreid and Pagan’s Mind. The festival was being held in what seems to be the only bad weekend (weather-wise) in the last couple of months, and we were very glad both stages were inside the marquee. We were wrong though about our fear of low attendance due to the shitty weather, since the organization could put up the “sold out” sign at the ticket booth halfway through the afternoon (and they even had to make some arrangements to get more beer on the grounds, since there was some serious drinking going on today). In total, some 1700 metalheads attended the Dokk’em Open Air fest this year at Saturday the 28th of May. 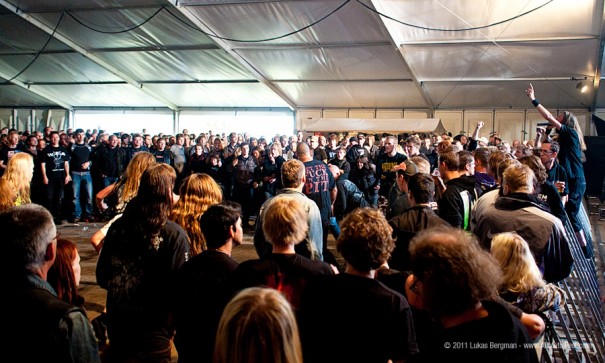 Diehards as we try to be, on Friday we already headed to Dokkum to pitch our tents at the festival camp for the whole weekend. With the tents in place, it was time for some serious bbq. Meat and Beer, a good start for a metal weekend! On Friday-evening there was an event called Dokk’em Rockt at the festival grounds, with more mainstream pop / rock bands. We took a look inside and drank some beer, but the music was not entirely our thing, since local heroes De Kast and Piledriver, a Status Quo tribute band were headlining this evening. Nonetheless, it was a fun evening.

After getting only about two hours of sleep (I forgot my earplugs and the party at the campsite went on until very very late (or early) and our group woke up way too early on Saturday morning) the main festival day was about to start.
At about one o’clock the first band of the day started playing. In the marquee, both stages stood opposite to each other so that when one band finished playing, the other band could kick in. Very good choice, since with this lay-out you could stay dry and see all bands if you wanted to. The first two bands of the day, let’s say both opening-bands, were both local Frisian metal bands who won a band contest (Highway to Dokk’em).

Dimaeon opened the festival. The style of music of Dimaeon is hard to describe, but it was a very solid set of these guys. The energetic singer tried to get the crowd into movement, but maybe it was just too early for that. Anyway, good set of Dimaeon. 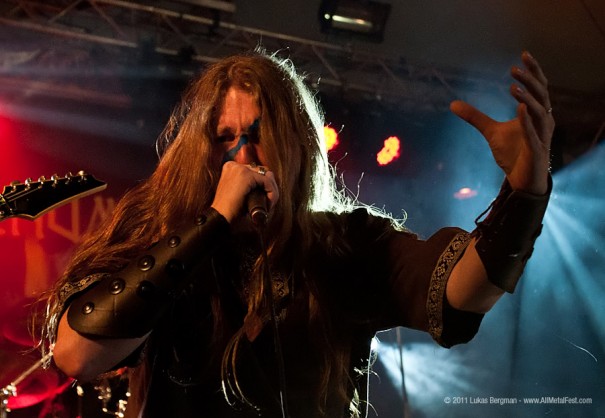 After Dimaeon it was time for the second local band of the day, and this time with local I mean really local. Baldrs Draumar originates from Dokkum, the city near to where the Dokk’em fest is held. Baldrs Draumar plays Folk-metal and the theme of their music is Nordic and German mythology. Also these guys played a solid set! 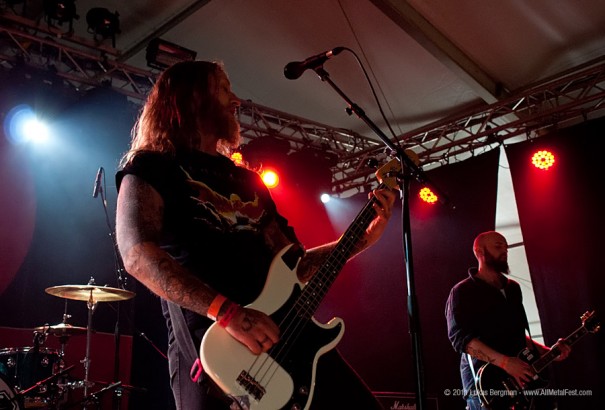 Meanwhile more and more people entered the festival grounds, and soon it was time for the first foreign act of the day: Krakow. I have to admit that I never heard of this band before, but since they were touring with Kampfar and Vreid I expected a black metal show. How surprised were we when their set kicked in and it turned out that Krakow play stoner / sludge with some post-metal influences! Nice surprise! Too bad this band from Norway only got only half an hour of playtime.

At the other stage Italian prog-band DGM was ready to start their show. I only saw the first two songs of their set and from what I’ve heard of it, not bad at all. 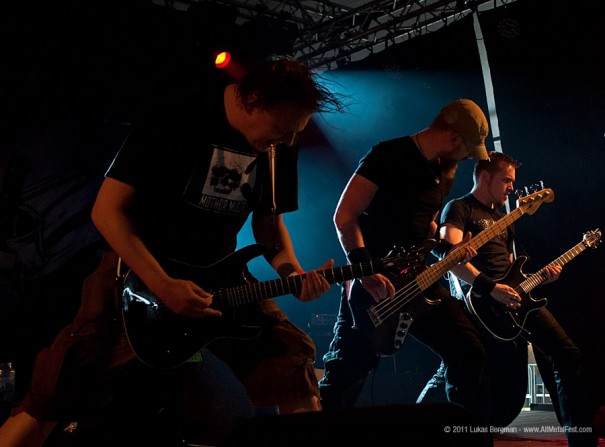 Then it was time for stompin’ death metallers The Lucifer Principle and that was quite energetic! As far as I know the first real mosh-pit of the day was going on in front of the stage and the singer climbed into the safety-fence to be as close to the crowd as possible. In 2008, The Lucifer Principle stood already on stage at this fest and it was a good decision of the organizers to bring them back this year.

I missed Dutch metalcore / hardcore act Chiraw and Norse progressive metal band Pagan’s Mind (which I completely regret, since their new album Heavenly Ecstasy is a blast and I really wanted to see them play live). Later, I heard it was one of the best shows of the day. I also missed a large part of the set of thrash-metallers Evile. The last few minutes of Evile were very, very energetic though. 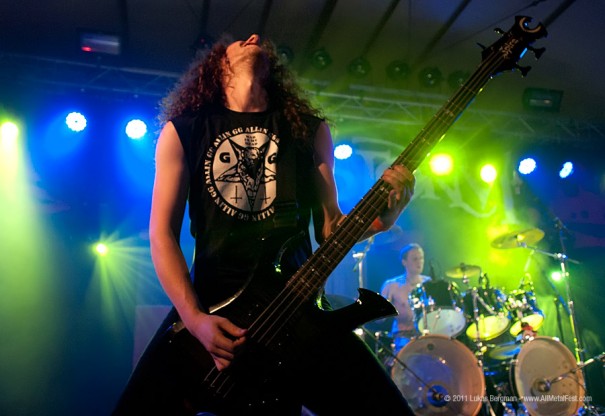 And then it was time for the party-band of the day: The Scottish Pirates of Alestorm! The Pirate metal mixed with a crowd that had been drinking a lot today meant it would be a thrashing party during their set. Songs like Black Sails at Midnight and Shipwrecked got the crowd really going. Alestorm never disappoints live, and this time was no exception! 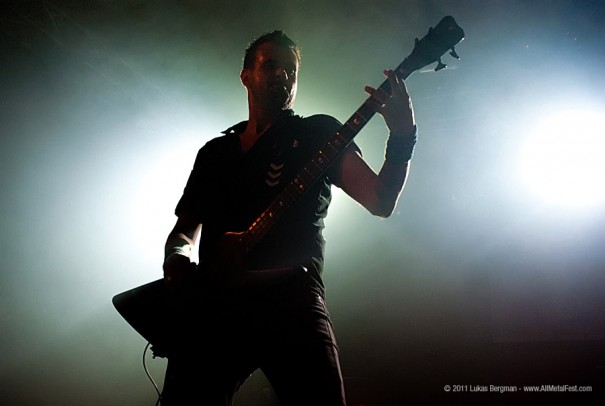 After the party-music of Alestorm the switch to the next band was maybe too big. Vreid was ready to start their set, and these Norwegians play dark music: black metal with some rock ‘n roll influences. For many this was a time to get some food but not for me: I really wanted to see Vreid, especially since their last album (V) is really to my liking. Unfortunately they couldn’t live it up to my expectations. It still was a solid set, but the instruments were at some points a bit in disorder and that was enough to not lose yourself in the dark sounds of their music. 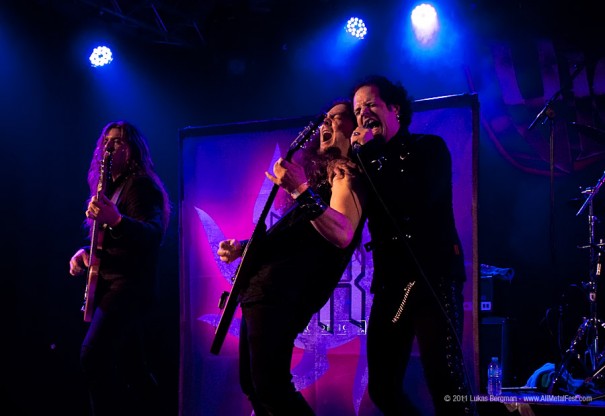 After Vreid it was time for Vicious Rumors. Since I don’t have a click with this band, I decided to stroll over the metal market and get some food. The prices at this year’s fest were really very decent, only 2 euro’s for a (normal-sized) beer or soda and one more for mix-drinks or bigger beer. These are prices that are long, long gone at the bigger fests in Europe. Also the food was (compared to other festivals) fairly cheap. 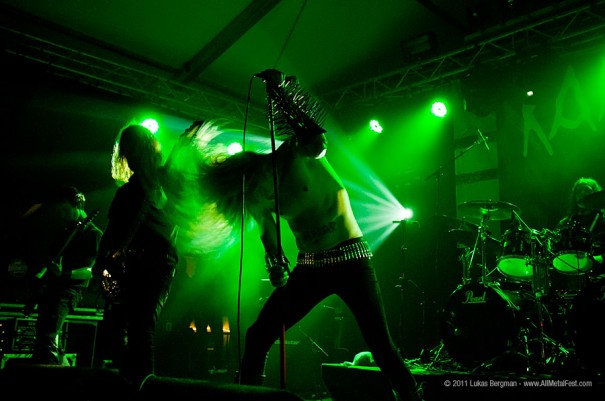 Kampfar was getting ready to start their set, so I headed inside again to see this black metal band from Norway (seems like it was almost a Norwegian / Scandinavian fest this year, with so many bands from the Nordic countries playing). I was very eager to see Kampfar. Their new album (Mare) kicks ass and I never saw them live before. And what a lovely show it was! Starting with the title-track of the new album and playing songs like Norse and Huldreland made my day! I watched the show with a big smile. Too bad that bass-player Jon couldn’t make it on this tour, but luckily Endre Moe from Trail of Tears filled in his spot.

With three bands to go (Evergrey, Vader, Hammerfall) we were starting to get exhausted (mainly because of the beer, the walking, and the not-so-much-sleep the night before). Anyway, Evergrey was the next band on stage tonight. They started somewhat late due to technical issues that also plagued the band during their gig (singer Tom Englund had some issues with his (literally) electrified microphone and there were also some issues with instruments doing other things than they were supposed to). Despite all this, Evergrey tried to play their set like they were supposed to be and besides songs from their new album Thorn they also played older ones like Monday Morning Apocalypse and Recreation Day. 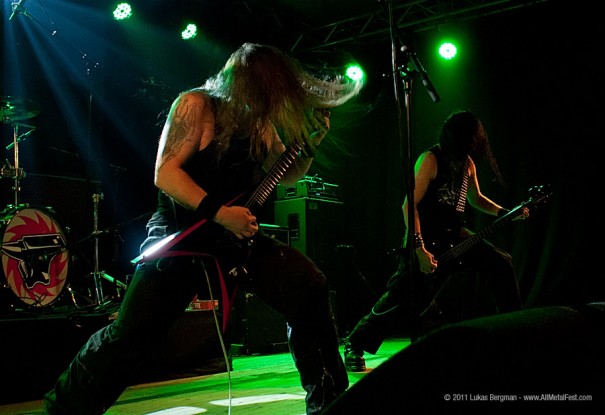 Vader. What can we say about them? A very fast and intense show, Polish Death Metal at its finest! They even played some songs from their upcoming album, which was quite nice. 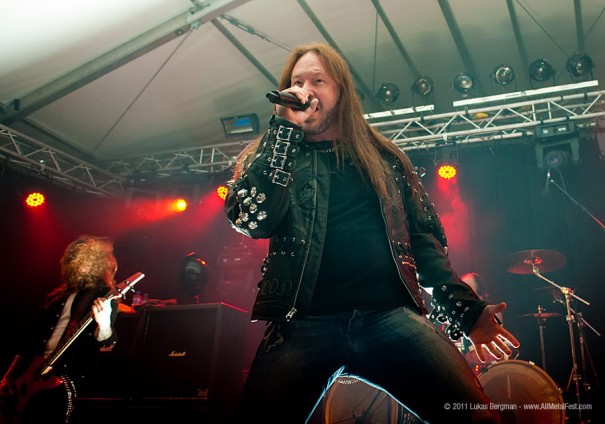 And then the waiting began. There were some serious technical issues at the stage where headliner Hammerfall was supposed to perform, so they started almost an hour late. After some excuses of the band (though they didn’t had anything to do with the technical issues) they said that, despite the late hour, they would play their full set. Hammerfall showed tonight why they are the absolute headliner of the day. The band was very enthusiast and the show was just perfect. Besides songs from their new album (Infected) they played of course also songs like Let the Hammer Fall.

Dokk’em Open Air is a small, very nice festival in the North of the Netherlands and perfectly organized. The atmosphere was very good, the bands played all very well and it’s just that fests like these are so much fun! I said it last year and am saying it again this year: Dokk’em: I’ll be there again next year!