Cannibal Corpse, My Dying Bride and Converge are among the bands that will perform at the 15th edition of the Brutal Assault festival held in Jaromer – Old army fortress Josefov, Czech Republic on August 12-14, 2010. 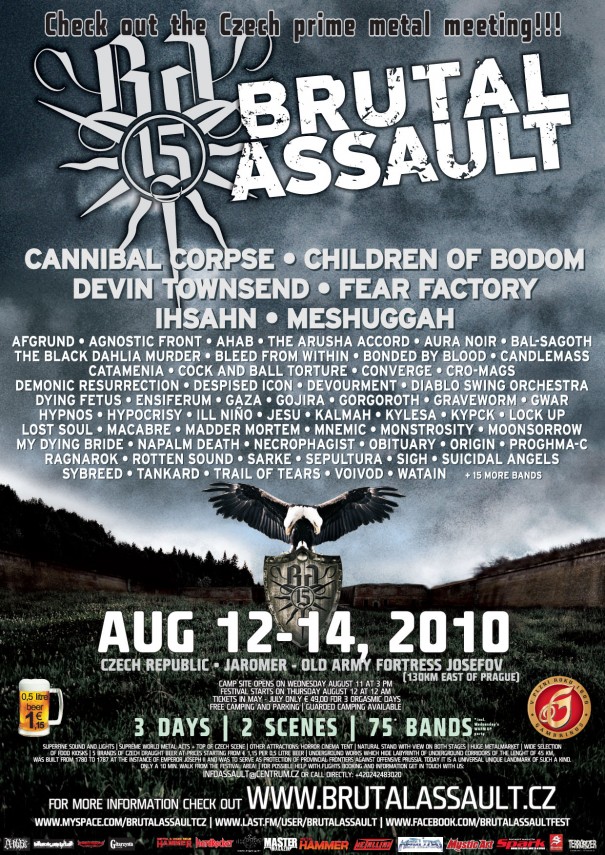 This year’s edition promises to be the best “Brutal Assault” ever. Marathon of extreme music can be started! The open air festival Brutal Assault 2010 will present during 3 days on 2 stages the best from various extreme music genres, in total more than 75 bands from around the world.

Both stages are on the main square and the festival “accessories” are placed in the surrounding space. The festival-goers will discover more than 30 refreshment kiosks with various kinds of food for carnivores, vegetarians and vegans, 4 big “beer tents” offering 5 brands of draught beer (1,15 EUR per 0,5 litre!) and also several kiosks with wide offer of various kinds of alcoholic drinks.
Visit our “chill out” zone on the place called Greenfield! This place is inside the Fotress, just a small walk from the main square with both stages. Greenfield is a place for your pleasure and relaxation when you want to escape from the sound terror. It is a place for recharging your batteries. Among others you can find there monster “Metal Market” with more than 50 stalls and Horror Cinema Tent.
Visit also our natural stand, a place for those who want to see the festival rush from above directly opposite both stages. We call it “natural stand” since it reminds a hillside where you can stay standing or sitting. This year first time with separate sound coverage!

The camping site is approx. 300 m from the festival ground on a grass field. The camping site also includes “VIP Camp” which offers camping in the fenced area, toilets, washbasin and depository for use of the VIP camp inhabitants exclusively, a free 3-day pass for the natural stand and one time pass to the showers situated in the camping site. VIP camp is guarded 24 hours a day from Wednesday August 11th till Sunday August 15th.