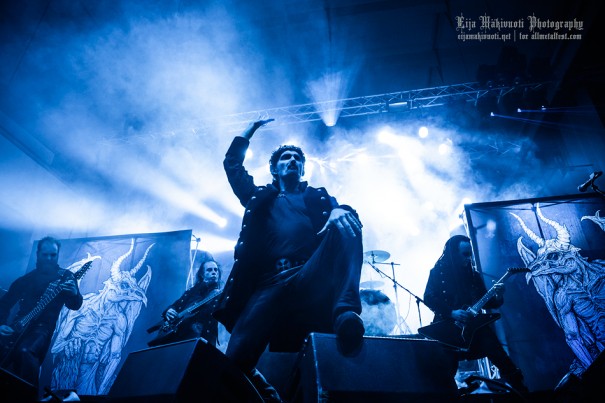 December is always a busy time in Finland with all the pre-Christmas parties and many other events -and Live Nation did their part in bringing some pre-Christmas treats for metal heads to Helsinki: one of them was the Amon Amarth gig on December 9 with Carcass and Hell at the Cable Factory. The concert was to take place in the former marine cable plant which is the Cable Factory’s largest venue with a capacity for around 2500 people. By the Monday of the gig there were still more than enough tickets available which might have to do with the size of the venue but also the fact that the tickets were quite expensive with 39€. Also the date may have not being the best one as it was the Monday after the Finnish Independence Day on December 6 that fell on a Friday this year turning this traditionally drink-heavy occasion into a long weekend that many took advantage off and hence made this the Monday of all Mondays. Despite all that, a decent crowd made their way to through the cold evening appreciating the fast handling of the entrance control by the security. The coat check was priced at a decent 2€ which was the last positive pricing surprise as the drink prices ranged in the higher spheres as they usually do at these bigger gigs in the city center: 7€ for a 0,5l can of beer or a 0,33l can of cider. The beer area was set up with a fence stretching from the back right corner of the hall towards the stage taking up a good quarter of the venue so one could enjoy the drinks and watch the show at the same time. The bar tables that were set up in there gave the whole thing a nice touch and except for the breaks between the bands when everyone rushed to the bar and toilets there were only few queues. The usual merch stand was there of course too, as well as an ear plug stand with the full budgetary range from 2€ ones for one time use up to 25€ for the luxury model. 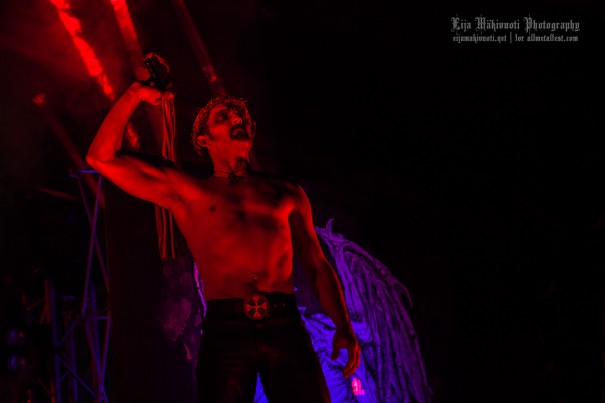 The crowd remained somewhat limited at the beginning but luckily it started to fill up which was good as the hall was quite chilly at the beginning. Hell was scheduled to perform first at 7 p.m. and I must say I have rarely been to a concert where every band has played as extremely punctual as on this gig. This was not the first time for me to see Hell and I had never really clicked with them so I decided to just take it easy and watch them from the beer area. Despite not being a fan of their music I have to admit they certainly know how to make an entrance with an intro and a big light show that worked well in this venue with all white walls. With the first sounds of the intro, the area in front of the stage started to get more crowded and also in the beer area the first fists were up in the air. Starting off with “The Age of Nefarious” from their latest album the show got kicked off with strong drums and a guitar solo and to my surprise the sound was quite decent for the Cable Factory which is not the easiest venue. 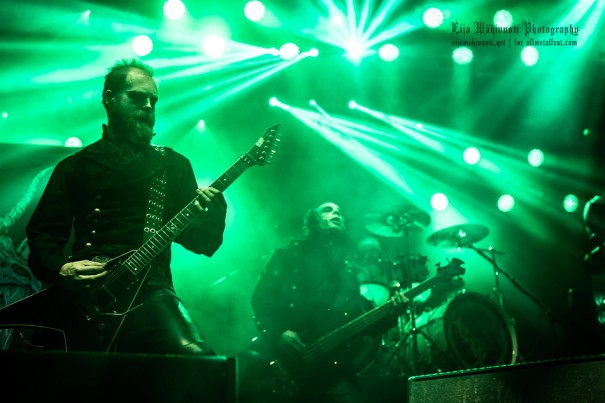 One issue for me with Hell has always been that David Bower’s vocals just don’t suit my taste and the vocals and the music don’t seem to come together for me but luckily tastes are different and lots of people enjoyed the show and David and his men certainly are great at interacting with their audience, making a real effort to connect. Funnily enough, their fan base somehow seemed to concentrate on the left side of the venuewhere most hands were in the air – maybe this was a sign of Hell fans taking the band’s occult theme as an opportunity to not only follow the Left-Hand Path but to also stand on that side. The show was set up to be a spectacle from the lights to the triple axe guitar-bass-choreography and David’s constant and restless movement around stage. Maybe a few powerful poses might have had a better effect though. As if he could read minds that moment came a bit later with “Blasphemy and the Master”: the slow, pulsing rhythm of the song was supported by the red light cylinders that filled the stage that David entered shirtless and with a whip to chastise himself. I can appreciate the theatrics and aesthetics of such a performance which to me is much more powerful than the nervous running back and forth. David then welcomed the audience to Hel(l)sinki, the kingdom of Hell and went on to continue the evening sermon with “The Quest”, visibly enjoying what was as he called it “the last sermon of the year” to which he invited the audience to open their psalm books at page 666 and he joined them to sing along jumping down to the photo pit. 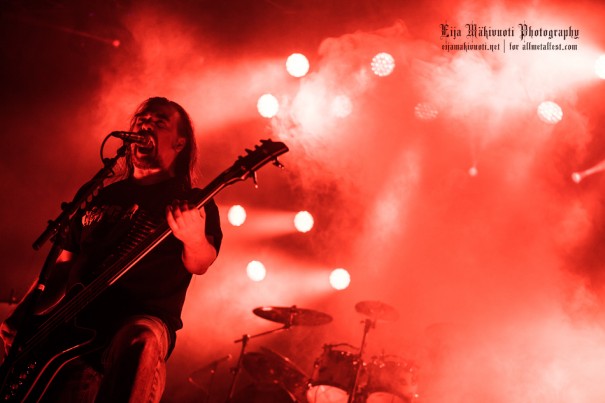 When Carcass entered the stage, again perfectly on time, the energy was very different from Hell’s – people seemed to slowly wake up and get more excited, it felt more metal. The sound was ok again though the guitars could have been stronger but that did not stop the audience from applauding and the band doing some proper long-hair head banging which was exactly what a metal woman like me needed to wake and warm up on a cold, tired Monday evening. While starting off with some older songs like “Buried Dreams” and “Incarnated Solvent Abuse”, one could tell that they are certainly proud of their latest album “Surgical Steel” pointing out that it has been voted album of the year by various magazines when getting to the new songs like “Unfit For Human Consumption”. The music and the overall full bodied sound continued to embrace the audience and when Jeff Walker asked them to start a pit, hair started flying also offstage. The video projections on the side banners were a nice detail and despite the simple stage setup created a proper mood. Atmospheric blue lights generated a special scenery when they started playing “Genital Grinder” that they dedicated to Niclas Etelävuori from Amorphis and Ville Valo from HIM as bumping into these friends was part of the reason for the Carcass reunion. Of course, the song was also dedicated to the ladies. Carcass seemed on a dedication roll as a further song was dedicated to their crew that had been on the road with them for many months on this tour. Ending an energetic gig with a blast by playing “Ruptured in Purulence” as a last song surely was the right choice but before leaving the stage for good, Carcass teased the fans with a few cover beats of Amon Amarth what again earned them a well-deserved applause. 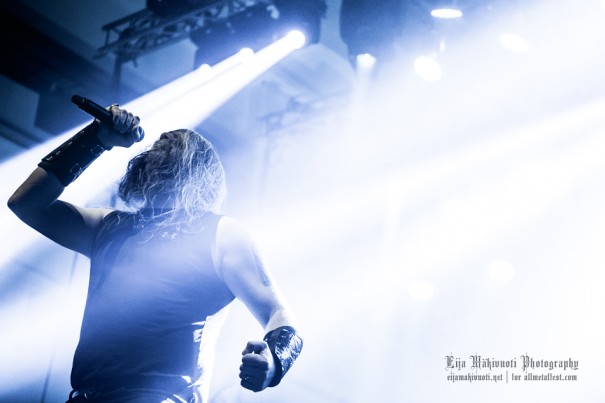 For Amon Amarth it was time to change location and head closer to the stage where I ended up standing behind what looked like the coolest family trip ever: a father or older brother with two young metal heads around the ages of 7 and 12 were standing and waiting patiently for Amon Amarth to come on stage. The stage was decorated with a huge backdrop as well as a Marshall amplifier fridge – I am sure to put that on my wish list to Santa! Amon Amarth clearly drew the biggest crowd so far but even in the 5th row in front of the stage there was still breathing room which made this gig one of the more pleasant Amon Amarth gigs I have attended – and they range from being so packed that you could not even lift your beer to your mouth at their “Fate Of The Norns”-record baptism gig at the RoFa in Ludwigsburg to the Markthalle in Hamburg where it got so hot that you could squeeze several liters of sweat out of your T-Shirt afterwards and that gig was in January, mind you! 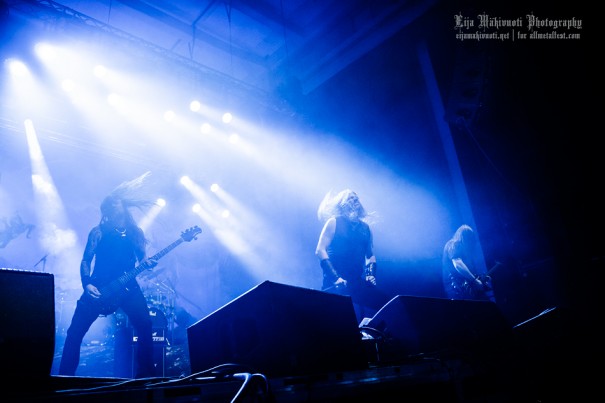 Amon Amarth started their set on time and immediately huge cheers went through the audience. The sound during their first song “Father of the Wolf” from their latest album was not optimal – it was a bit flat as the guitars were not loud enough and the drums did not have enough power but Johan’s vocals were good and he looked like he was in a very good Viking shape, having lost a bit of weight. After “Deceiver of Gods” Johan did what he does best when he is not singing: flirting with the audience, enchanting them with his smile and his Finnish skills that contained the one curse or other – always a sure way to win over a Finnish audience and flattering Helsinki as the most metal town of all Europe certainly helped too. Johan also had noticed that it was a quite chilly night so “Death in Fire” was the perfect song to turn up the heat and the first song where I caught a glimpse of the old Amon Amarth fire. Continuing with a mix of older and newer songs the set continued strong and the crowd loved every moment of it, singing along, fists and horns in the air including the previously mentioned metal family standing in front of me. The band delivered a versatile show and during “As Loke falls” Johan proved that he is not just the smiling Viking dream of many (wannabe) Valkyries but that he could also turn into a scary warrior as green light turned his face into a grimace from Hel’s world. 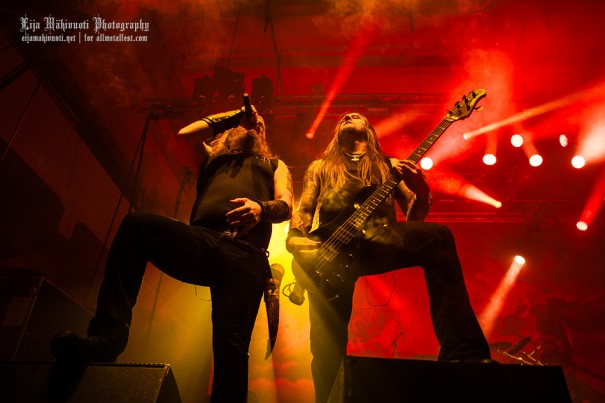 The stage then also seemed to have become a part of the underworld, pitch black with dark creatures scurrying over it – but the secret was soon to be revealed: for “Runes to my Memory” two red glowing rune stones were brought on stage and while they might be slightly over the top the song was certainly top notch. “Varyags of Miklagaard” was next up and certainly both a band and crowd favorite as hair was flying on stage and most of the audience followed Johan’s request to jump. Old Amon Amarth energy and atmosphere came back once again during “Guardians of Asgaard” with the stage bathed in red lights, and Johan drinking from his horn – I might be partial to the older material but these songs just kick ass and it felt like the band was coming together more. 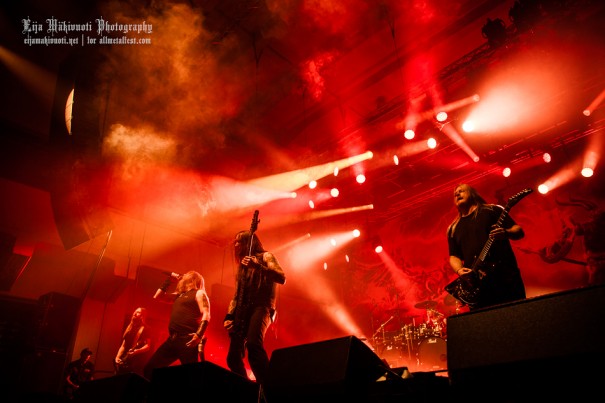 I guess it is inevitable for bands that tour as much and have as many albums out as Amon Amarth to have some level of routine in their shows but they are one of the bands that keeps the balance well with the power of the old songs and their charisma – and Johan’s charm and honest stage presence certainly don’t hurt this either. The crowd undoubtedly seemed happy and showed it with shouts, hands in the air and moshpits in front of the stage and the beer area fence. And while other performers have wardrobe changes, Amon Amarth had changing backdrops that indicated different parts of the show. This and the stage having several different levels created an atmosphere without having too many elements. It was enough that at times Johan and one of the other band members went to stand on the elevated steps at the back of the stage surrounded by blue lights and taking serious postures while the rest of the band was head banging in the front to create a powerful effect. The next highlight for me certainly was “Cry of the Black Bird” despite Johan having announced the ballad section of the evening was over. For the first encore Johan pulled out one more– a huge Mjölnir that heralded “Twilight of the Thundergod” and last but certainly not least “Pursuit of Vikings” ended this 90 minute set with a bang. While this gig did not reach the intensity of the old ones it was a good show and overall a very enjoyable evening. Until the next time – skål!