The annual and biggest Rock phenomenon of Scandinavia: Sweden Rock kicks-starts the Swedish summer like a hard rock vitamine injection from hell. Over 30000 metal-fans around the globe are invited for the start 6th of June. Sweden’s national day. Sweden Rock is Sweden’s only four day full festival and housing in a small village named: Norje with about 600 inhabitants close the Baltic sea. 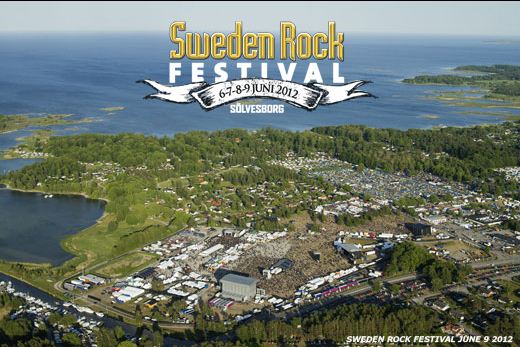 With over twenty years of experience Sweden Rock is by far one of the best organized festivals in Sweden. It’s located two hours from Copenhagen and about four from Stockholm international airport, for those who travel international for the big event. Train and buses are hired by the festival and transports metalheads from various distances. When you have arrived to the area there is a lot of choices how to live. In a bus, or in a Swedish conventional red cabin with white corners. MC camping or the casual no mans land with tents and trenches. 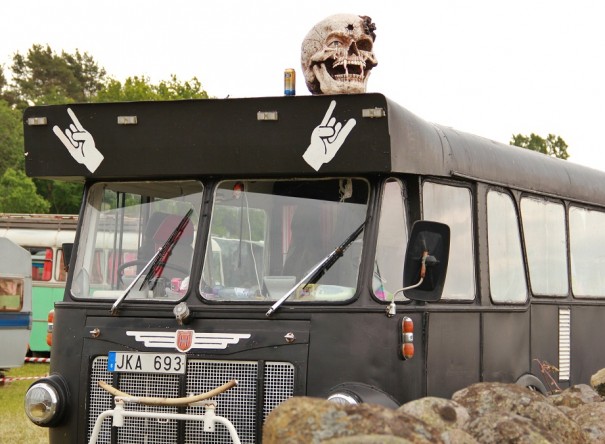 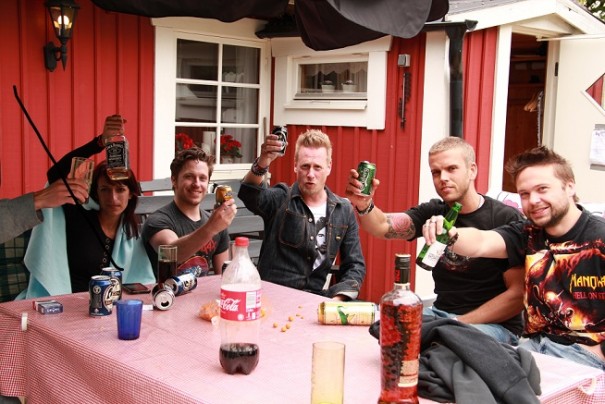 Last year Sweden Rock increased their area with over 20000 square meters which by many was considered as a welcome development. So the entire area now grasp over 70000 sq m of true metal spirit. If weather permits there is a beach connected to the festival area close by, were you can cool down with a beer in your hand, entranced by the music in the background. 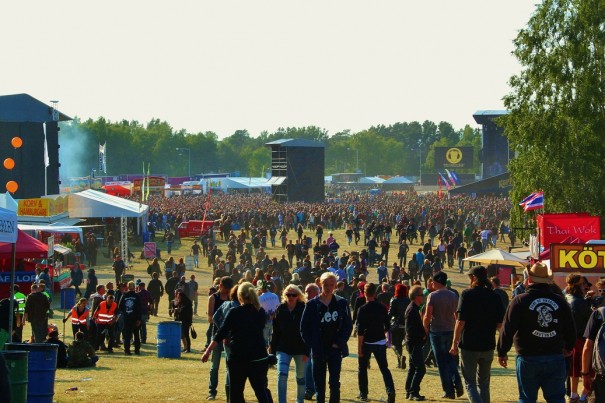 During early years Sweden Rock was mostly known as a rock festival with acts mostly heading from the 70-80’s. But since the younger generation of metalheads influenced the festival management with heavier bands from sub-genres such as death and black metal, the festival now days host a nice symbiosis between new and older bands from all kinds of hard rock to metal. Same goes for the visitors, expect to meet at least three generations of hard rock lovers. 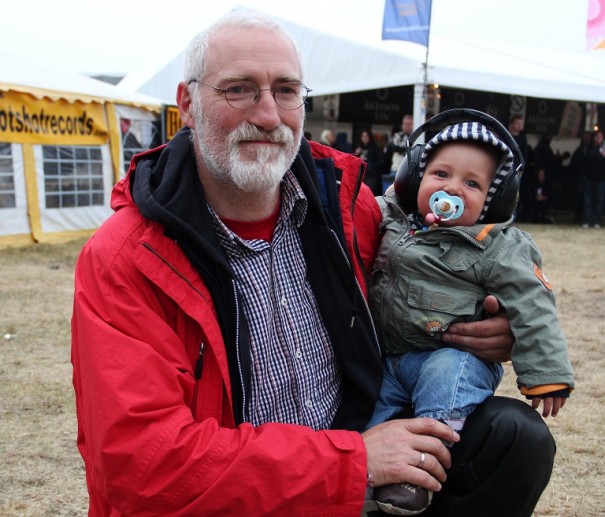 Around 16.00 The 6th of June the field in front of Sweden stage is crowded by metalheads in all ages for showing support for the Swedish war machine Sabaton. Sabaton started with the National anthem and the public acts with joy as a sing-along choir. Followed by Carolous Rex (English version). Most of the fans expected the song to be sung in Swedish (A mistake that the frontman Joakim Brodén told us later after the show that it should have been sung in Swedish). This was their first show in Sweden after the American tour with the new members and the newly released album Carolus Rex. And everything works out just perfect. 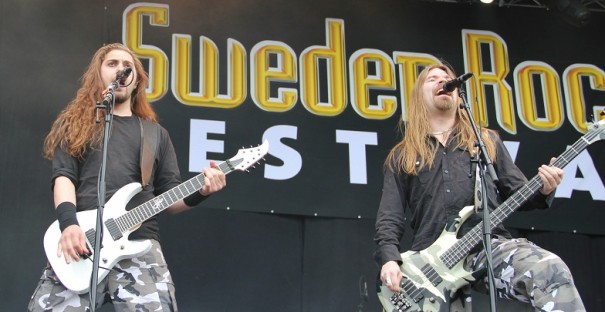 Sabaton’s frontman Joakim Brodén invites such enthusiasm in his stage appearance. The energy is transformed to the public like cosmic rays and the response is an intensive force of happiness and solidarity. A perfect start for the festival. 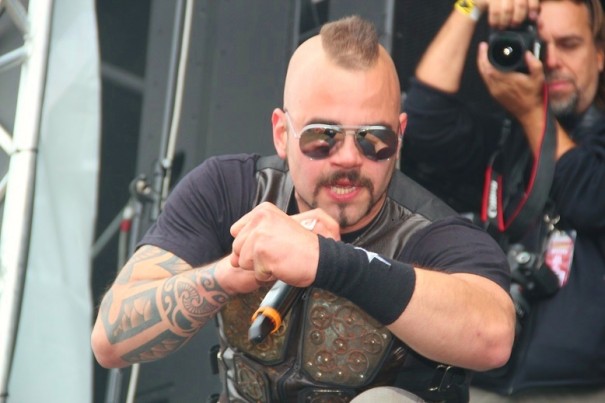 One hour later the festival inhabitants were introduced with industrial discipline from the Los Angels based band: Fear Factory. Their first appearance on Sweden Rock. Blast beats and tight riffs reigned together with authority and socially critical lyrics in a fabulous set list. Introductory Shock made people go wild in friendly manner in the moshpits. Vocalist Burton C Bell had a hard time getting his clean tunes together. His growl and harsh vocals worked out far better.

Overall it was a good show. 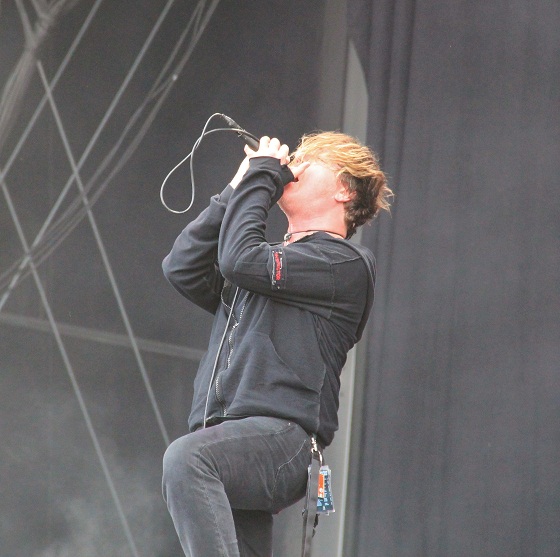 The five stages, Festivalstage, Rockstage, Swedenstage, Zeppelinstage, Rockklassiker stage is well placed across the entire festival area. As a visitor you notice how well planned everything is. You´re free to roam from stage to stage it never gets particularly overcrowded. You can drink beers from any of the bars and bring it wherever you like. You´re not pushed like cattle into a small “drink area” like many other Swedish festivals.

Want to bring your new fancy digital system camera? No problem. If you want to sit down in a chair or bring an umbrella for the shows. No problem. Many festivals battle with their visitors with this ridiculous rules… not Sweden Rock.

Deals Death a new upcoming melodeath band from Sweden was first out on Thursday. Followed by the Canadian speed metal band Exciter.

Exodus made sure that those who laid down went up in such a haste for general headbanging and beer drinking when the thrash legends entered the Rockstage.

Around dinner time Steel Panther did a fun appearance on stage. A lot of laughs and good a vibe were transfered to all beer drinkers and hair raisers.

Other big bands that played Thursday was Mastodon, Graveyard and Soundgarden. But the band that created most captivating feeling was by far Dimmu Borgir. 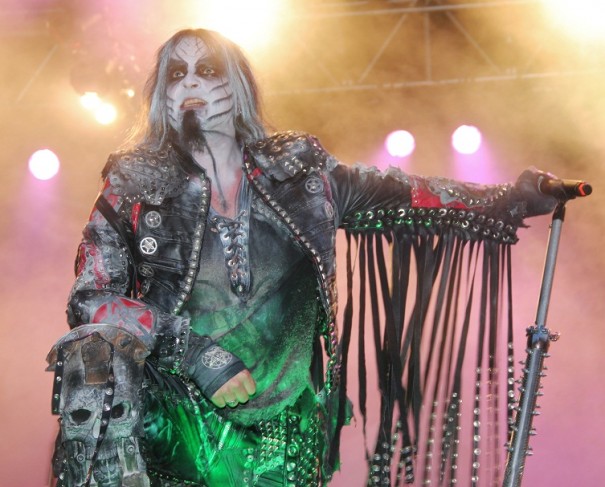 Dimmu Borgir the flagship of extreme /symphonic black metal hailing from Norway. Created almost a mythical embrace for every fan in their performance, you noticed quick that you were spellbound. Darkness was upon us all and enthralled us in fog, shadows and a great gig with a dream-list of songs. 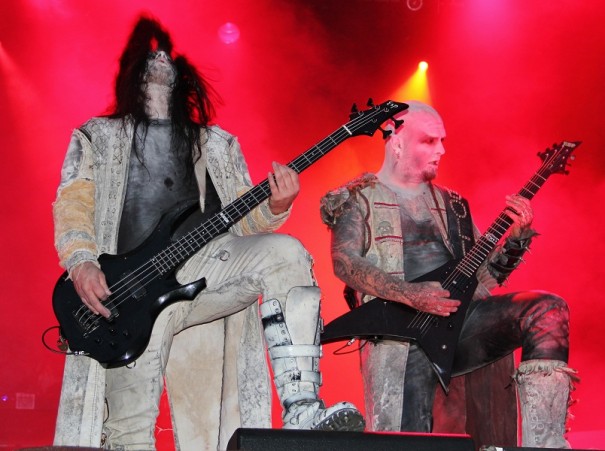 Amorphis from the land of thousand lakes (Finland) delivered as usual. Tomi Joutsen had no problems taking deep growls from the abyss or high tunes in the refrains. Top acts mostly from the Eclipse album but vulgar necrolatry was well welcome for every headbanger in the rain. 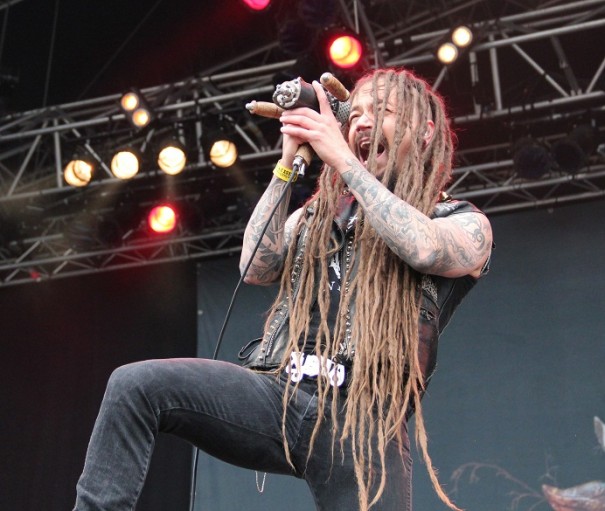 Sweden Rock along with third parties arranged a lot of press conferences, signing sessions for both VIP and the common visitor. We thought the one with Motörhead was the best choice to choose. It was not the usual press, meet and greet with the band. This was solely to promote Motörhead‘s new beer and snus (snuff) which hits the store the same week as the festival. 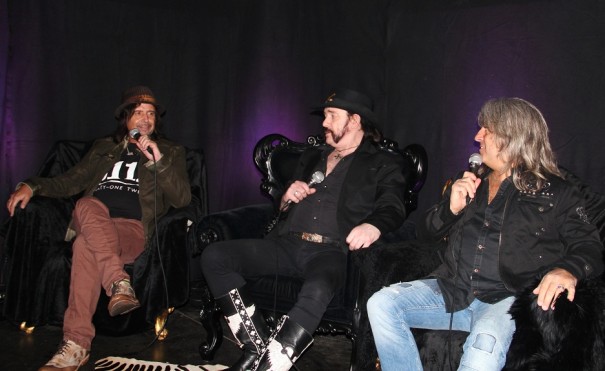 After a photo session with Motörhead time was about 19.00 and the complete camp area played songs from various Motörhead albums. The entire atmosphere felt like it were filled with sex drugs and rock ‘n’ roll. This time thousands of thousands people in Motörhead shirts went on pilgrimage to see the legendary band. Shame to those who didn’t followed the stream this time. 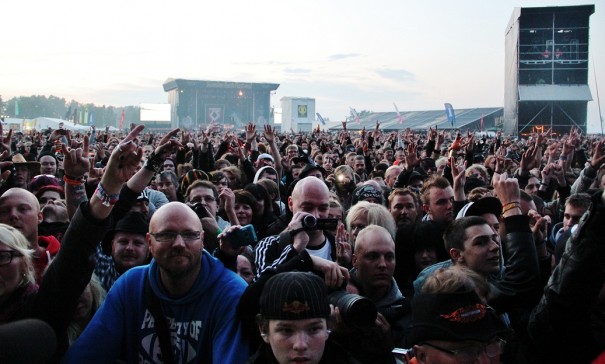 The first songs in the set were in many people opinions quite boring, exception for Going to Brazil. Halfway though the set the legendary bomber rig descends like a giant steel skeleton from the stage ceiling . Motörhead reaches ecstasy when everybody’s all time karaoke favorite: Ace of spades hits their ears along with a bombastic light show from the bomber rig. Also Killed by Death, where legendary drummer Mickey Dee throws drumsticks 5 meters up in the air and drums at the same time is nothing more than impressive and a cool statement how good he is. 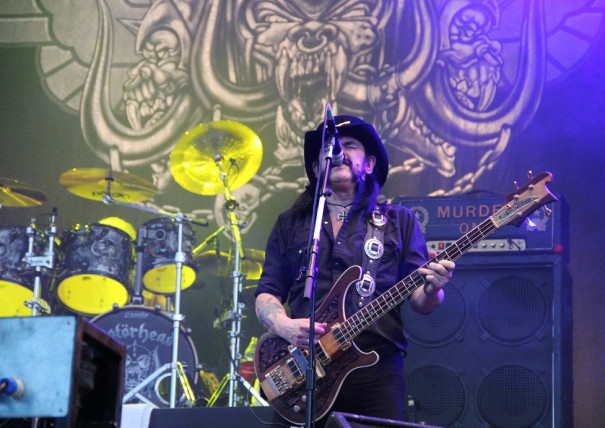 During the last day, the sun makes a welcome comeback. It felt like you´re traumatized in a good way with a great festival spirit from all top acts.
Roaming through the merchandise and food areas. You find whatever you like for quite good prices. T-shirts price is on a regular level. About 150kr each (20-25$) In some tents they even take credit cards. 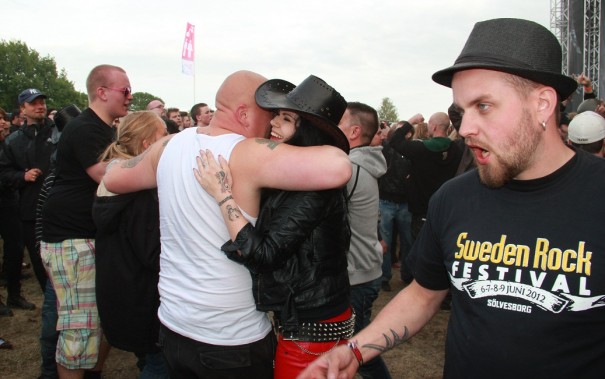 But and advice is: Bring money before, so you dont have to stay in a never ending cue to the ATM. The choice of food is almost limitless. There is such a great mix for everybody. Vegetarian, crocodile, kangaroo and the specialty of 600g festival hamburger for reasonable prices. You get a 33cl beer for 45kr (6-7$)

A four day ticket cost 2400kr (343USD) It’s an expensive festival ticket. The festival camping which is privately owned its not included. So per person this adds another 450kr (65$) to your account. Same goes for visitors to the camping. But never have we seen such a clean festival area. Sweden Rock has over 3000 functionaries doing a top job by cleaning flush toilets and swiping away trash from the ground. They even offers applications to your smartphone and lots of other media services.

King Diamond were by many picked out as the best. He had such an theatrical act with cages, coffins and all property for a good show. The King invited lots of guests in big caliber to stage, such as Michael Poulsen from Volbeat and former King Diamond drummer Mickey Dee from Motörhead.

Mötley Crüe had their own private rule that no photographers were allowed in the photopit. The festival only big corporate marketing control, not controlled by Sweden Rock. Their performance felt like it was more fitting for a Las Vegas event than a rock festival. A nice light show with a cool 360 degrees drummer cockpit of some sort, made the drummer Tommy Lee play up and down while rotating, quite spectacular. But Vince Neil vocals sounded mediocre and not particularly inspiring so in the end all the great effects felt lavish when the performance wasn’t as brilliant as it could be.

To summon up: Sweden Rock has such a nice blend of bands and people from all over the world. The atmosphere, the festival feeling is one of the best. 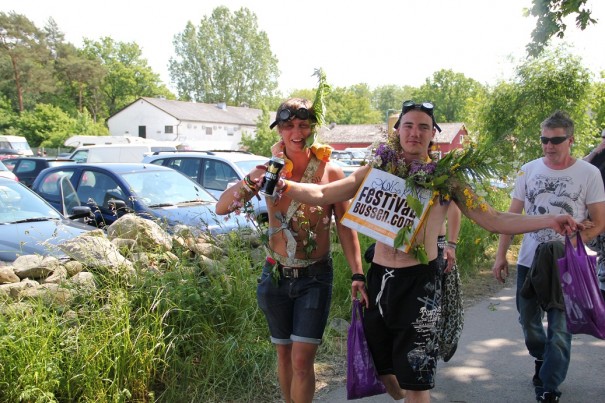 Tickets for next years Sweden Rock will be released 25th of September this year. Make sure that you don’t miss this unique trip to rock and metal paradise, even if it cost you it’s well worth it in the end. 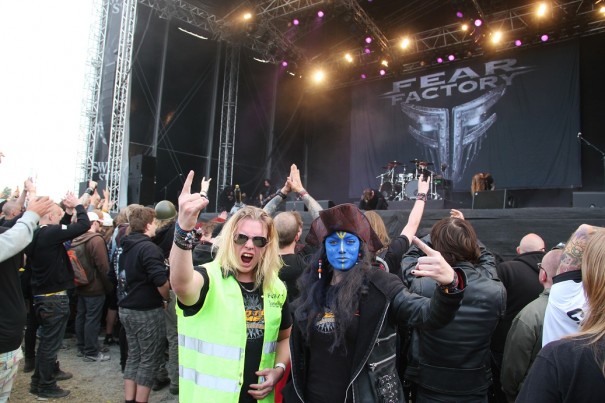