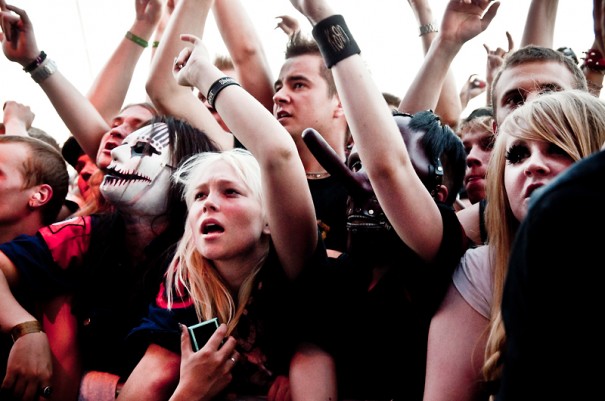 The two first Finnish editions of the touring Sonisphere festival were held in the small city of Pori, a few hundred kilometres northwest of the capital region of Finland. With Iron Maiden and Metallica headlining on the consecutive previous years, Sonisphere managed to pull a lot of Finnish festival-goers in despite the unorthodox location. 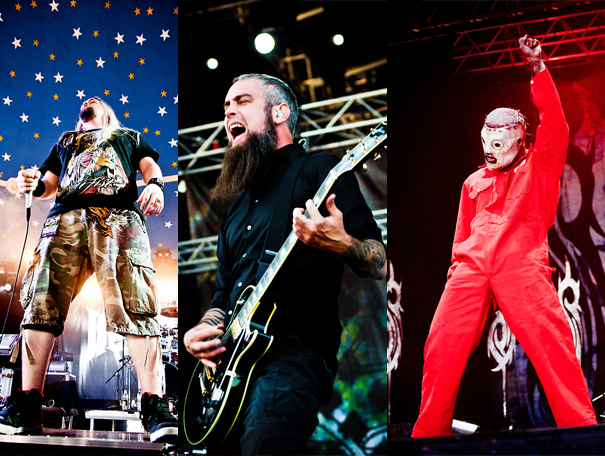 This year’s edition of the festival was relocated to Finland’s capital region to the heart of Helsinki, and cut to be just a single day event. Also the headliners would be of a smaller scale than before, namely Slipknot and In Flames 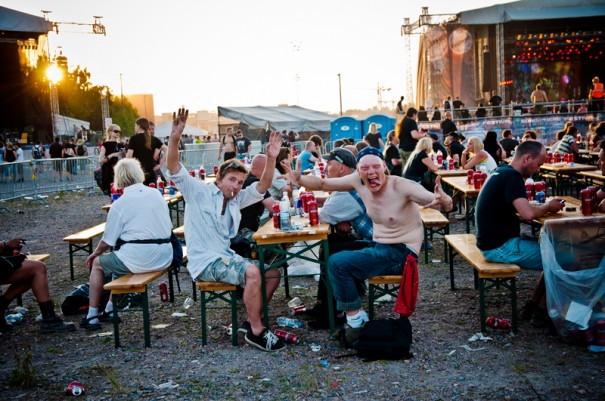 Come July 2nd, it was time to head out downtown to Helsinki’s Kalasatama and its newly established concert grounds located seaside in an industrial area, to see how this year’s scaled down and relocated Sonisphere could live up to its predecessors. 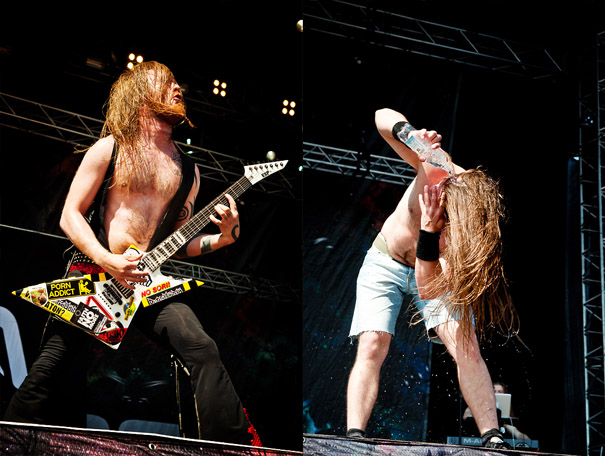 Stam1na opened Sonisphere‘s main stage with what Finns are used to see from them every summer since their 2005’s self-titled debut. The Lemi-based band is the recent winner of local national broadcasting company YLE’s public vote for “The Best Finnish Live Band of the 21st Century”. While its often wise not to put too much weight on online polls, Stam1na once again proved that they do live up to the title, with another frighteningly tight and electrifying set. What at first glance may have looked like a complete chaos with the band’s frontman Hyrde taking turns running, crawling and spinning around the 30-meter wide stage while mercilessly beating his guitar, was actually an extremely precise, yet thunderous delivery of solid picks from the band’s back catalogue. The band was extremely well received from a few thousand early birds already at the area by 2PM, and the bar for the following acts was set sky high.

The Kalasatama area, hosting previously one-off shows for bands like Foo Fighters and Green Day, is of a perfectly good size for a festival like this. However, even asphalt would be a blessing as opposed to the sand field with several fist size rocks that covers the festival grounds. A nightmare for anyone thinking about going into the pit, or even walking around the area with anything lighter than army boots. 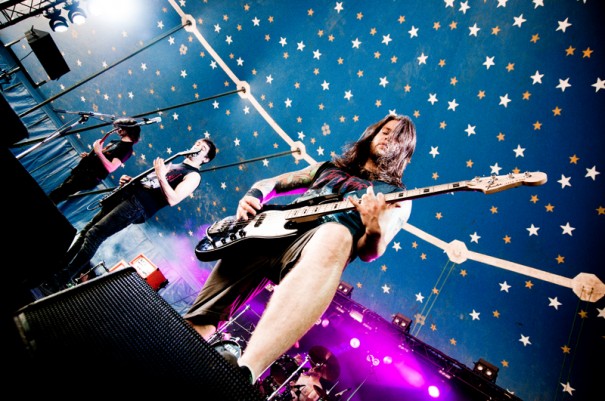 Next up on one of the side stages was Sylosis, a relatively fresh UK band, playing technical thrash metal with a strong metalcore influence. The band sounded – and looked, thanks to the band’s frontman Josh Middleton – much like early Trivium, as they strolled through their tunes opening with “Empyreal” and its surreal sweep picking parts. The band has clearly more potential than your average metalcore band, but they didn’t seem to be working overly hard with getting the crowd, who seemingly weren’t familiar with the band, converted into their fans. 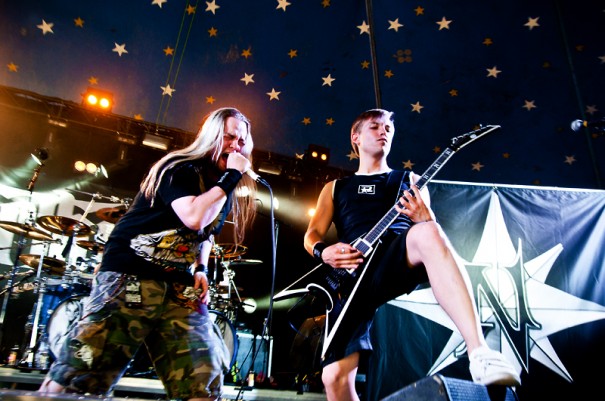 Norther has gone through a difficult lineup change with the band’s frontman Petri Lindroos being forced to drop out of the band to concentrate on his career in Ensiferum. Aleksi Sihvonen (Medicated, ex-Imperanon) has stepped up to take care of the vocal duties, and Daniel Freyberg (Naildown) is the band’s new rhythm guitarist. With the band’s descriptively named first studio effort “Circle Regenerated” with the new crew, Norther 2.0 is still quite faithful to its old sound. At Sonisphere‘s Bohemia Tent, Aleksi and Daniel seemed to have finally have found their places in the ranks of the band, unlike on some of the first appearances since Petri‘s departure from the band in 2009 when they still seemed a little reserved. Aleksi replicated Petri‘s vocal lines well, as the band opened with “Deep Inside” and played a set that was relying surprisingly much on the band’s new album, with at least 6 tracks being played from it, perhaps on purpose underlining the fact that a new page has been turned on Norther‘s book. Older hits on the menu included “Death Unlimited”, “Frozen Angel” as well as the party anthem “We Rock”. 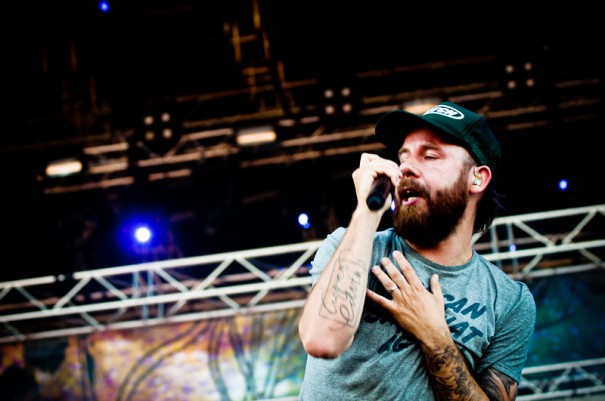 With plenty of stands serving food, the festival-goers had a wide variety of options ranging from ethnic foods to the savior of Finnish festivals, the Alepa truck, selling groceries at their fair market value. Pricing in the food stands was at your average festival level, but the 6,50€ price tag on drinks at the beer garden, facing the two open air stages is really, really pushing it even for a Finnish, seasoned beer-drinking yuppie. Also available at the area, was facilities to make the second biggest mistake of your life after getting married by getting a drunken festival tattoo. 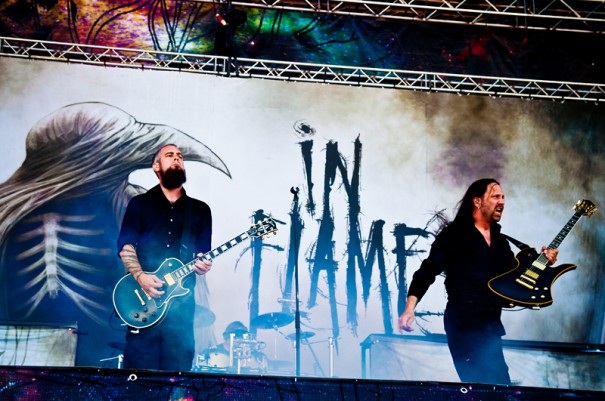 In Flames is one of those bands that you can count on having fun watching whether their music does anything for you or not, because they’re always certain to get the crowd going with their mass-appealing tunes with catchy vocal lines and melodies. Despite their latest efforts getting mixed reactions from fans and media alike – and in particular their latest effort “Sounds Of A Playground Fading”, forged without the band’s founding member Jesper Strömblad – In Flames maintains a faithful following of fans with their strong set of (older) hit tunes. Kicking off their show on the main stage with “Cloud Connected”, the quintet from Gothenburg seemed to be on an exceptionally good humor, with the singer Anders going into a few longer monologues between the songs, and handing out a towel to be used as a pillow by someone ‘sleeping’ against the fence, apparently already holding her spot for Slipknot. The mellow “Where The Dead Ships Dwell” was the only track heard from the new album in addition to the video/single cut “Deliver Us”. 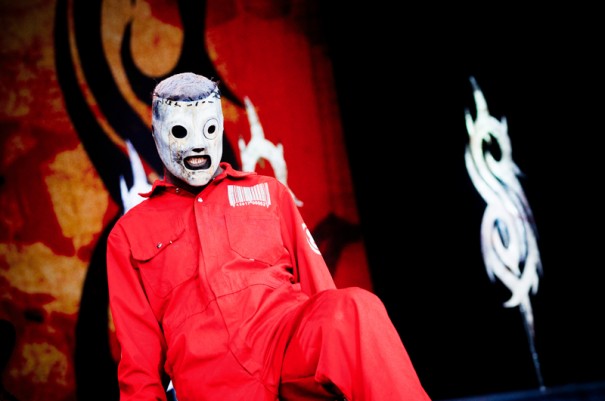 The headliner of the festival, Slipknot, was honouring the memory of their passed bass player Paul Gray; his outfit and bass were hung next to the drum raiser, and a session player was playing the basslines from the side of the stage, rather than performing in front of the crowd. Other than that all the band’s usual theatrics were there, from Jordison‘s elevating & tilting drum set to the flame pyros. During “Duality”, the band’s DJ Sid wandered into the audience to climb on top of the FOH tent, and dive back first down into the audience. The reckless looking maneuver ended without injuries, as the audience grabbed him and sent him back to the stage. The concert ended with “Spit It Out” and the traditional ‘Jump the fuck up’ routine, where the whole audience crouches down before jumping during the last chorus of the song. All in all Slipknot‘s stage show is an entertaining circus, but they could look into coming up with some new tricks, rather than recycle the same ones for years and years. 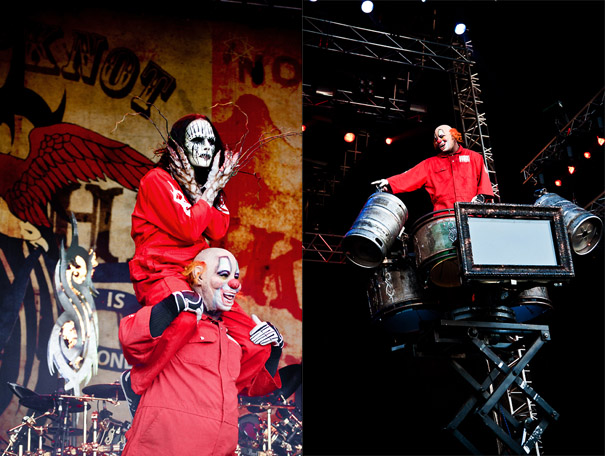 Despite the initial letdown of the toned down lineup from the previous years, this year’s Sonisphere delivered a good one day festival experience, although with the ticket price at 85 EUR one could have expected to get more bang for the buck.