Sauna Open Air has returned after a year of absence, now in a new location in central Tampere. For its 2013 edition, Sauna was held at the Ratina stadium right by the Tammerkoski Rapids in the heart of Tampere. While vendors and the festival’s second stage were placed beside the stadium, the main stage was set up inside allowing attendees to sit down and watch the shows from the stadium’s seats. The location sounded odd on paper, but actually worked quite well in practice. 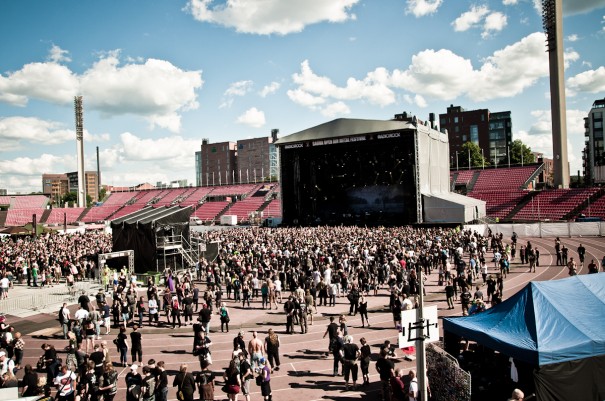 Loyal to its name, the weather in Sauna was steaming hot on both days.

Stratovarius opened the festival’s mainstage with an uplifting show. The band has become a solid unit despite many key lineup changes, and has managed to switch up gears with some new found energy, proving the ones wrong who thought that they would just wither away. The band was pretty fun to watch, and although Kotipelto is certainly not 25 anymore, what he may have lost in his voice he makes up for with his active stage persona. 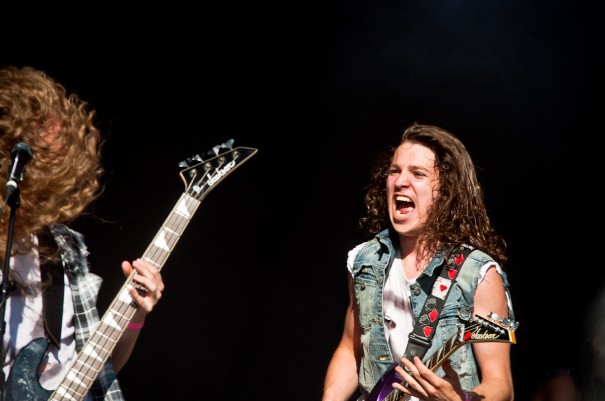 Lost Society and Bloodred Hourglass are both up and coming young bands that got their million dollar chances on the second stage between the sets of the big Finnish trio Stratovarius–Children Of Bodom–Nightwish. Lost Society bows to old school thrash metal, while Bloodred Hourglass is a modern sounding groove band. Both bands share in common their young age, and an exceptional drive to show what they’ve got with their high energy shows. Neither of the bands are particularly original, but Lost Society doesn’t feel like a clear b-class act, whereas if Bloodred Hourglass wants to be remembered as something more than a cheap Lamb of God pastiche, they’ll need to add a few tricks of their own to their toolbag. Generic songwriting never got a band anywhere, and mimicing your main influence’s stage manners religiously is sure to make you a laughing stock. Lost Society‘s young dudes have a brighter future ahead of them if they can keep on writing more striking tracks.

Half a litre beer in Sauna‘s three beer areas would cost you 7 euros, which seems to be the new, steep standard for festivals in Finland. It didn’t seem to slow the Finns down on Saturday, who were perhaps stacking up for possible inflation taking the price to 8 euros the next year. 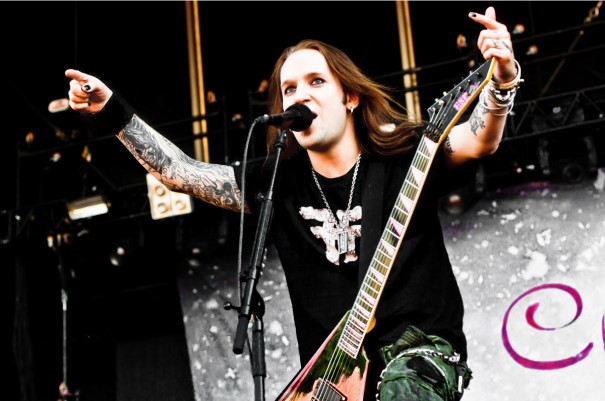 Children Of Bodom had kicked off their Halo of Blood world tour just the day before from Espoo. The quintet’s latest album has been very warmly welcomed as a long awaited return to form, but the band’s festival set was still compiled mostly of the band’s older classics. The band’s winter themed backdrop provided a funny contrast to the sunny weather, but other than that the murder patrol’s show didn’t really offer much new to those already familiar with their live manners. The show-opener “Transference” and the blast beat showdown “Halo of Blood” were the only tracks performed from the new disc. Still, this routine show was warmly welcomed by a big crowd who hadn’t seen the band in town for 2 years. 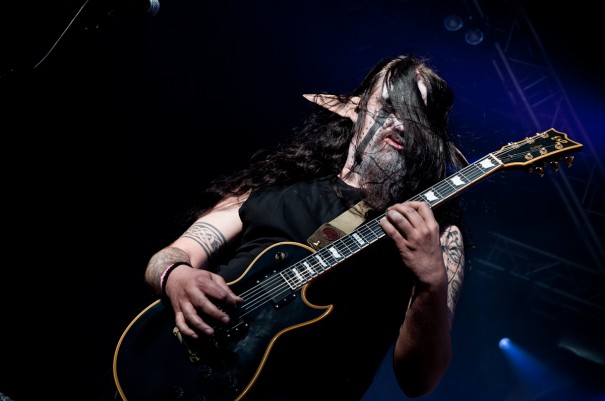 While Opeth may have played the most miserable set ever seen on a sunny open air festival stage, Finntroll managed to impress on the small stage. With their set focusing mostly on their latest works, the band played a good deal of their older classics, too, wearing goofy troll-ears(?). The band’s “new” singer Vreth still doesn’t really sit into the band in my opinion, but I can slowly start to see why some fans think differently. Maybe we’ll just need to give it another 10 years, and he’ll feel just as good of a fit as Wilska was. 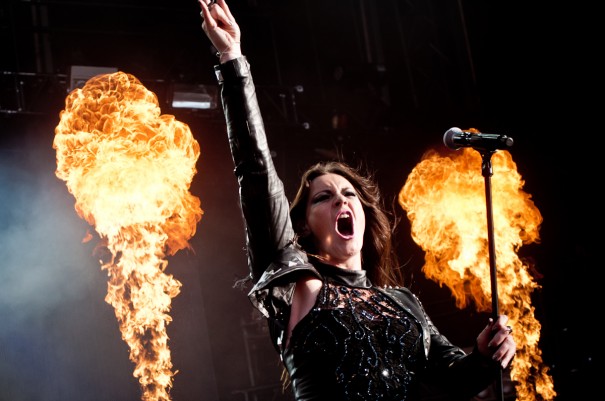 If it was still unclear to anyone, Nightwish‘s Sauna Open Air headline set proved that the band’s success has never relied on the women fronting the band. Now, Nightwish is with the 2-meter-tall Dutch Floor Jansen, who, truthfully, is the best singer ever to sing for the Finland’s biggest music export. She has been with Nightwish for only 8 months, but was already welcomed with open arms by even the most hardcore Nightwish fans among the 7,000 strong Finnish crowd. And it’s no wonder. Jansen, together with Troy Donockley (pipes, flutes and what have you) and one of the most intense Nightwish pyro shows to date, the band ended the first day of Sauna with the very best they’ve ever got to offer.

Day two. Sundays on festivals are always a little bit depressing, as things seem to be winding down, less beers are flowing down the throats and everyone’s getting ready to head home. 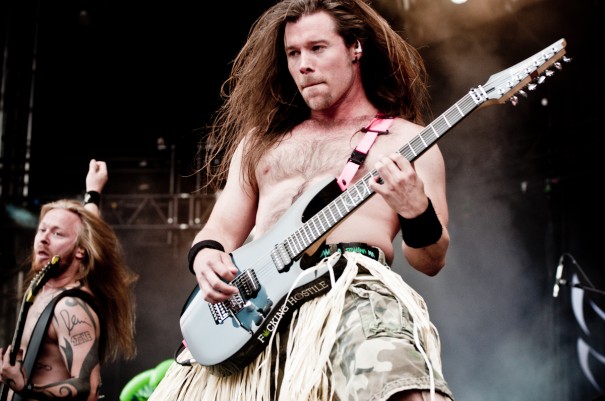 Stam1na is a band that clearly doesn’t like taking themselves too seriously. Last year they were dressed as hillbillies on their festival run, and this time they opted for a beach paradise look. The most interesting piece of their set was the new song Rautasorkka, which sounded more progressive and quirky than their previous work, but didn’t seem particularly catchy on the first time through.

Local food vendor Poppamies was spicing up Sauna’s food selection, stepping up the game from the regular food stands you can find on every festival. Their fiery sauces can put even the toughest chiliheads in agony, and their naga morich infested burgers and chicken wings were a definite hit for anyone curious to push their limits. 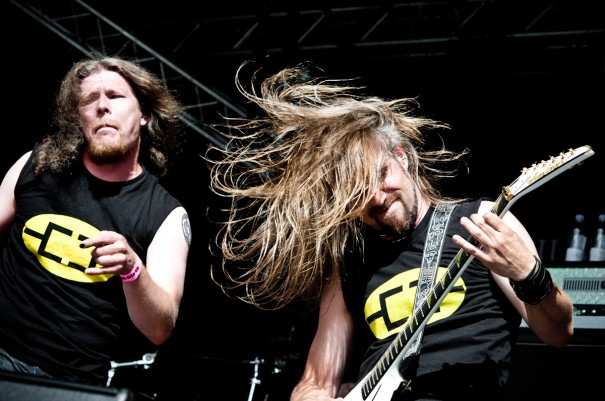 I didn’t quite catch if Omnium Gatherum‘s (Batman) logo shirts were done with tongue in cheek or not, but the band’s show itself failed to impress me. They completely disregarded their first three albums in their first setlist, and the new stuff just lacks the edge and primitivity that the early OG stuff. 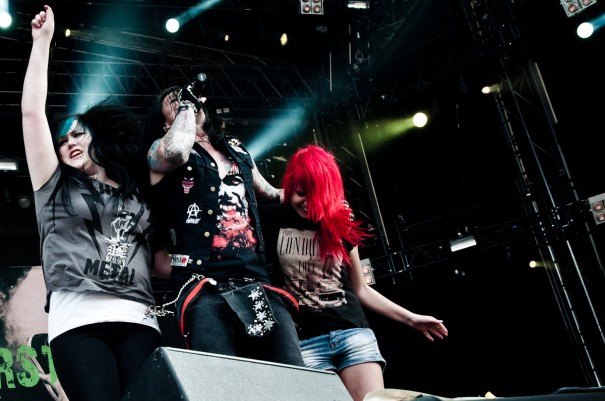 Hardcore Superstar is regular visitor to Finland and simply meant to play big stages. Their sing-a-long tunes are tailormade for getting the mood up even on a Sunday, as their biggest hits like “We Don’t Celebrate Sundays Anymore” and “Guestlist” showed. Hardly 16-year-old ladies were lifted on the stage from the audience, and offered shots before getting a chance to sing “Last Call for Alcohol”. To my surprise we didn’t have to read about this incident from the next day’s papers.. 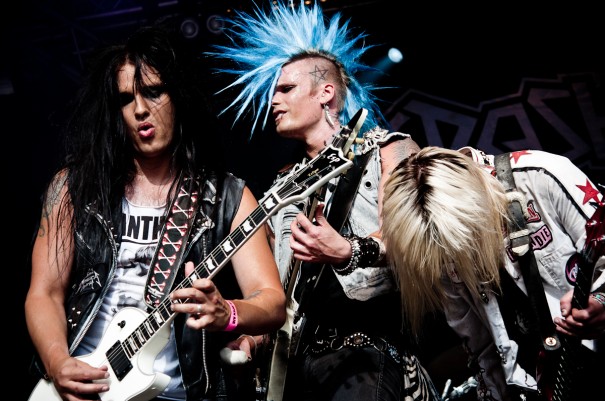 Crashdiet‘s set started on the small stage right after Hardcore Superstar, which was an odd booking as the band must share more common fans than any other two bands on the festival. Crashdiet‘s Simon Cruz is an edgy frontman who reeks of that danger and unpredictability that most polished singers are these days lacking. A welcome trip back in time for us younger generations, a glimpse of what it looked like back in the day when rock n roll was still dangerous. This time the man didn’t burn his pants like on their 2012 Helsinki show with Mötley, but concentrated on what he does best – singing. His voice isn’t particularly technically advanced, but it comes from his soul and just sounds that damn good. The Swedish four piece suffered a tragic loss as their manager suddenly passed away during their recent tour. The band’s assets were frozen due to this incident, so they went on to launch a fundraiser campaign for fans that exceeded all expectations and enabled the band to continue on the road. This mess didn’t show up in the band’s performance at all, besides them thanking the fans for their support, and playing “California” for the memory of the man that helped them tour all over the world with a shoestring budget.

Sabaton has gone from being this silly smalltime Swedish band into a huge crowd magnet over the course of the last few years. Their recipe is just straight up heavy metal with some symphonic elements and lyrics about war history. Add to the mix their city camo uniforms, pyros and there you have it – a perfect band for geeks who like their metal like Swedes like their beer – watered down, dull, safe n easy. Given, these guys are more fun to watch than your average band thanks to their big production, but their music leaves a lot to wish for. 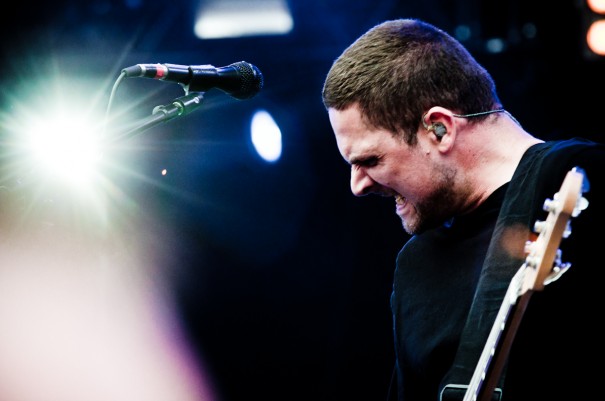 Volbeat is another band’s whose success is pretty difficult to comprehend. Few tunes of their Elvis meets heavy metal was enough, and it was time to wrap the festival up.

While most festivals never return after “taking a break” for financial reasons, it’s a relief to see that Sauna is back alive and kicking. With 13,000 attendees this sunny weekend, one can hope that they’ll be back again next summer.

For more photos check out the Sauna Open Air 2013 Gallery