Pentagram in Helsinki on December 3, 2011

It almost seemed like the storm gusts tried to stop people from getting to Nosturi that 3rd December when the US-doom metal pioneers Pentagram were giving their third show in this year in Finland which was again organized by Blow up that Gramophone. After having played a sold out show at the culture factory Korjaamo in April 2011 they were back in time to deliver an early musical Christmas present for their fans. The reception in spring was so good, that they not only visited the south of Finland but first waved hello to Santa Claus (who is living at the Arctic Circle in Rovaniemi which is about 160km further north than Oulu) by visiting Club Teatria in Oulu for a show the 2nd of December. 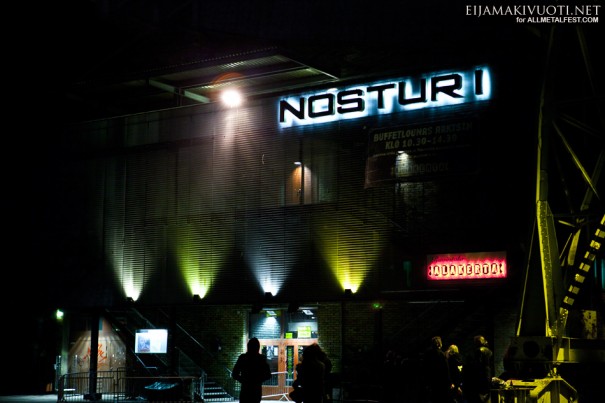 The next day brought Bobby Liebling and his fellow band members back south to Helsinki where they this time played in the already mentioned Nosturi. Nosturi is a live venue with a maximum capacity of 900 people (but then it is packed like sardines in a can) that is run by the Finnish Live Music Association (Elmu) that has the goal to support and promote Finland’s youth and music culture. With metal being a major part of that culture it is no surprise that Nosturi often hosts metal concerts of all kinds. The venue has an industrial charm with being located at Telakkakatu 8 (Shipyard Street) and having a former life as a storage building. The name Nosturi, meaning crane, then is only suitable. Nosturi is easily reached with trams and busses within 10 minutes from the railway station. One negative aspect of the public transport connection is that all of the trams running close to Nosturi stop going around midnight so on weekends when the concerts usually end around 1 a.m. one has to walk or hunt down a cab to make it back to the city centre to either get a night bus home or as (most) Finns do relive the just experienced concert over a beer in one of the metal bars of the city center. 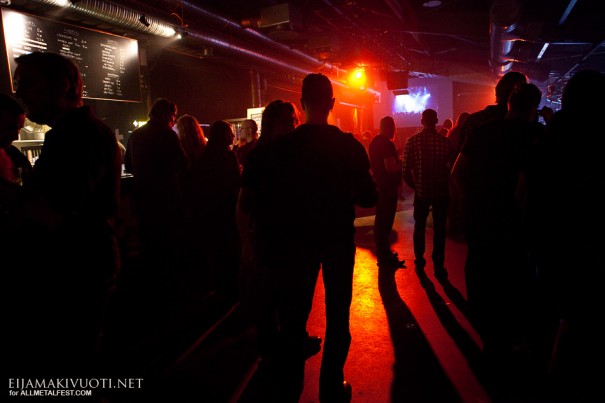 The industrial charm also continues on the inside both in good and bad ways. The good ways being the dark colours, use of metal and simplicity and functionality of the interior design. Not so good is the fact that every time when using the restrooms there you need to bring some tools with you to fix or close the stalls as the doors can only be closed by pushing up a bolt on the top of the door over the frame above for which you need to be quite tall or wear heels in preparation for that. Also more often than not the bolts are broken so in order to go after your business and hold the door closed you need to practice your yoga positions or ask one of your friends to come to the restroom with you (and that’s why girls never visit the restrooms alone!). But that’s just the girl’s restroom; yours truly doesn’t have any intel on the one for guys. The prices for drinks are similar to all of the city centre locations between 5€ and 6€ for ciders and beers and they have the usual variety for long drinks, shots and non-alcoholic drinks. One thing that might be helpful is to know that at the door it is not possible to pay the tickets with cards which is very rare in Finland. So bring enough cash which was 30€ in this case, making the concert a rather expensive treat. Or o course you can buy the tickets beforehand. Also, the usual wardrobe charge of 2,50€ has to be paid in cash at the door. 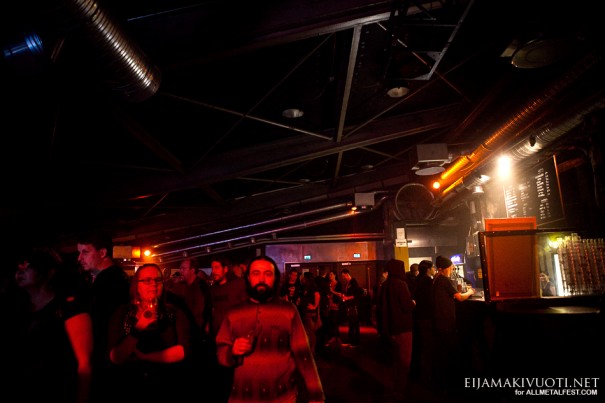 The wardrobe area is comfortably big so you can take off and put on your jacket without knocking out the person standing behind you and from there it is up one or two flights of stairs depending whether you want to or are allowed to go on the balcony and its bar on the 2nd level which is for over 18 year olds only if the concert is open to people under that age. From the balcony you have a good view of the stage even though it gets crowded in the front row there quite easily. But for that there is also the screen where the concert is projected in real time. From the balcony you can get down directly to the stage level where there is as well a small area for over 18 year olds where you can get alcoholic drinks from the bar. Both on the balcony and downstairs there are usually some chairs and tables to sit and stand at as well as the long bench on one side of the concert hall that runs along the whole length of the hall where people sit or during the concert stand on to get a better view. 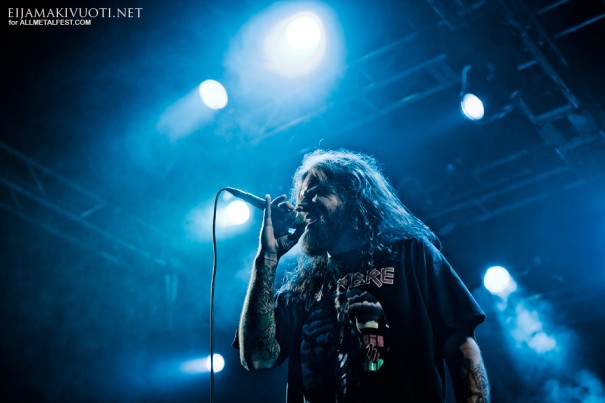 The first band of the evening were DoomDogs from Sweden who were also playing their first gig outside of their home country that evening. They stared sharp on time at 9.30 p.m. in front of an almost empty Nosturi with only a few very young concert visitors in “blue-carrot-jeans-with-white- 80ies-sneakers” -outfits standing around in little groups. The concert was not sold out and it was a Saturday during pre-Christmas season where both concerts and pre-Christmas parties fill up the already crammed calendars of Finnish concert autumns even more and this was clearly showing. The DoomDogs were not intimidated by that and did their thing with good sound and energy on stage and trying to motivate the few people to head bang offstage. Towards the end of their 30 minutes set more people came and some were even in time to see and hear the cow bell performance in the song called “The Annie-Christ”. Overall it was an energetic, groovy gig and the band did not hold out on their energy despite not having a large audience which always is a huge plus. 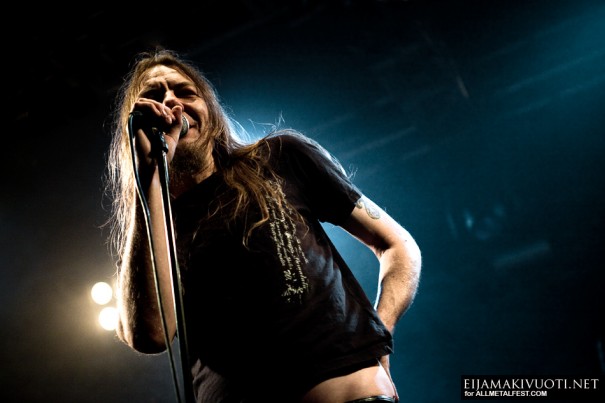 The second band of the evening was Lord Vicar from Finland and by the time they got in stage the concert hall was filled with a good amount of people who also rose the average age at Nosturi as well as the average amount of facial hair not only of the band but also of the audience. It then was also clear that many people in the crowd were there to see not only Pentagram but also Lord Vicar. Best Saturday evening concert atmosphere very quickly filled Nosturi with hair flying and hands in the air. Lord Vicar then also for the first time this evening created that special Doom Metal concert feeling of wafting, slow but oh so powerful energy around you that the more groovy DoomDogs set was missing a bit. Lord Vicar’s stage show accordingly was a bit cooler and more relaxed compared to the DoomDogs one but each show suited the music and the atmosphere well which is the only thing that matters.

Then finally the main act of the night was taking over the stage and even if you would not have known that Bobby Liebling is from the USA you could have guessed immediately as bands from across the big pond are always very talkative and engaging with their audiences and Pentagram was no exception to that rule. But even if Bobby wouldn’t have said a word during the whole gig the crowd would have reacted with the same enthusiasm. From the first minute on every one was going full throttle. Pentagram is also a band which proves that metal keeps you young because Bobby Liebling at age 58 being the only original member still in the band, does have this ageless rock’n’roll look despite the wrinkles. And his hair: No matter what Bobby seems to do, his hair do holds; whether he is running around, singing or shaking his head. (Who remembers the Schwarzkopf add for 3 Wetter Taft Hairspray?) The crowd definitely loved the band, the show, the music and everything else so the mood was the best it could be. Pentagram played a 80-minute set and the audience loved every second of it. This having been the first Pentagram concert for yours truly it might be the only slightly negative thing to say: It felt that the gig had moments where it seemed to be going for too long. But the majority of the audience probably would disagree with that as even during the last encore most people were not leaving which at Nosturi means that you have to queue for ages on the stairs down to the wardrobe when everyone rushes down the narrow stair case at the same time. So if you are in a hurry to leave from Nosturi, make your way to the wardrobe during the last song. 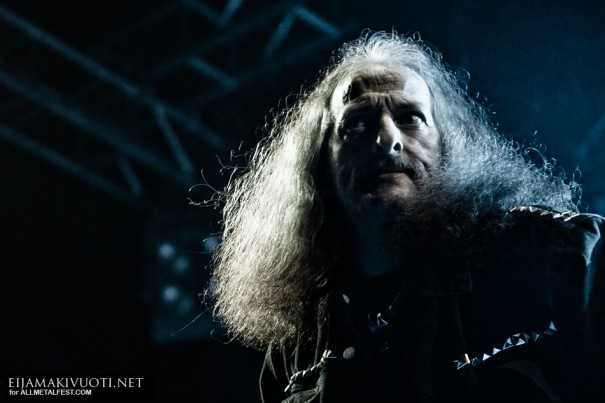 Having seen all three bands live for the first time and not having listened to any of them very extensively beforehand either, yours truly must admit that Lord Vicar were the (maybe not so secret) highlight of the evening but all bands had their individual energy on stage and delivered a good gig and Pentagram were clearly the audience’s Liebling (Liebling means “favourite” or “darling” in German). 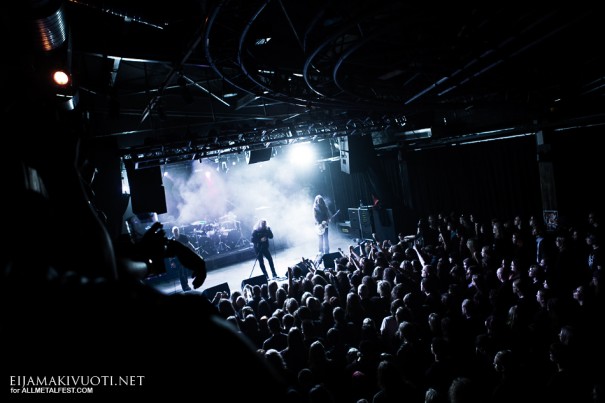