It was a very special atmosphere when heading to Kuudes Linja that Thursday evening (13.10.2011) for the Negura Bunget concert: A mostly clear sky was lit by an almost full moon, the clarity accentuated by the odd cloud and a cold wind was announcing the coming winter. Kuudes Linja is a club located in Helsinki’s Kallio district and its name means the “6th line” which is a play on the fact that there are five streets named first to fifth line (if you for fun want to try pronouncing those in Finnish for some language exercise they are Ensi linja, Toinen linja, Kolmas linja, Neljäs linja and Viides Linja) that make for one of the Kallio neighbourhoods. 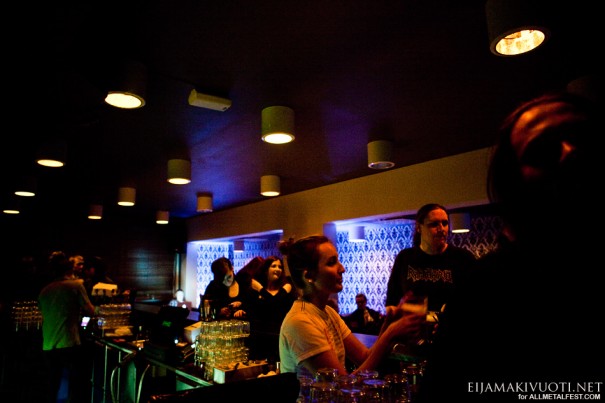 Kallio is a former working class district situated a maximum 5 minutes metro ride from the central railway station. Nowadays it has become a trend area for young and hip people who enjoy its nightlife and proximity to the city center. You can find tons of bars there that are usually much cheaper than the ones downtown and they often still have that working class flair with the bars not being too polished and one can see the professional drinkers sitting there from 9.a.m. on. 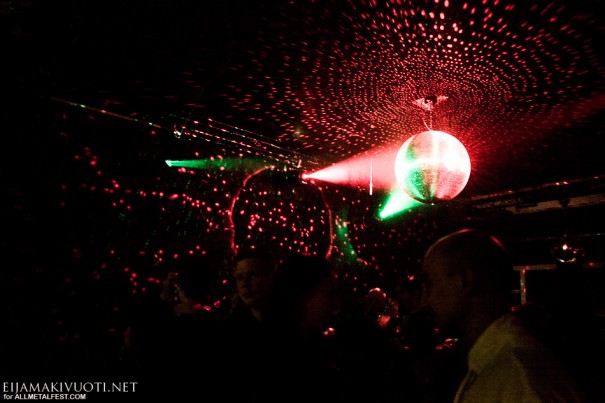 Kuudes Linja then is located at one of Kallio’s and Helsinki’s main streets, at Hämeentie 13 between the metro stops Hakaniemi and Sörnäinen. It is slightly hidden as you can see it from the street but the entrance is in the backyard. The place is a club that has discos, parties and concerts of a variety of musical styles on its program and it is open from Wednesday to Sunday every week. For Kallio it ranges on the pricy side with the wardrobe fee costing 2,50€ and a half a liter beer going for 6€, ciders and lonkeros for 5 and 6€. (If you wonder what lonkero is here a quick explanation: Lonkero is the Finnish way of saying long drink, however it is not freshly mixed but comes from the tab, can or bottle – it is comparable to an alcopop. The original lonkero is gin and grape juice but now a days there is almost every flavor imaginable available, the most common one being cranberry.) 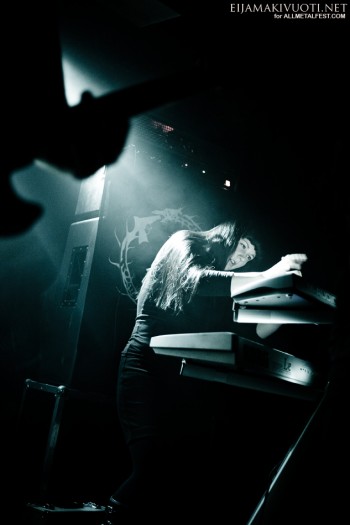 But enough talk of Finnish drinks and to the concert at hand. The tickets were not so cheap for a small concert during the week with 14€ in advance and 16€ from the door but Negura Bunget playing their first ever shows in Finland justifies those prices. Helsinki was the second stop of a four gig tour with the other stops being Jyväskylä, Turku and Oulu. When arriving at Kuudes Linja the doors should have already been opened 15 minutes ago but people were still queuing outside in the chilly night waiting. After another 15 minutes, the same time the opening act TotalSelfHatred should have started playing the doors finally opened. So after hurrying inside, getting the stamp, paying the wardrobe fee and getting rid of the jacket it was up the stairs to the actual place which is one huge room that is separated by a wall leaving two entrances/exits to move between the two spaces which are the lounge and bar area and the stage and audience side. It is one nice aspect of Kuudes Linja being not only a concert place but also a club that there is this lounge part with sofas to chill in and the place being decorated and styled more than your usual metal concert place with wall papers and fitting color schemes. 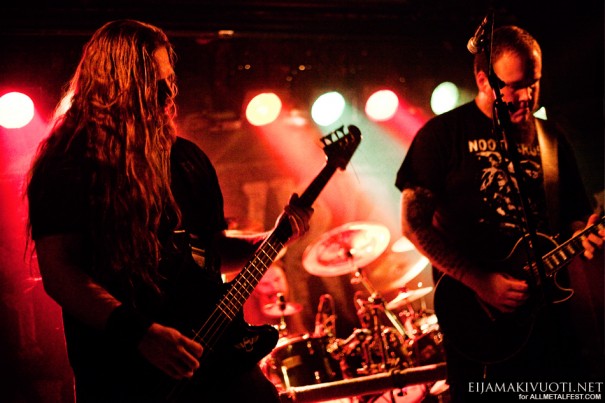 Despite the 30 minutes delay of the door opening the first band started only 10 minutes late. It was TotalSelfHatred from Helsinki – a band founded in 2006 that yours truly had seen several times already both before and after the release of the latest album in February of this year. The first thing that came to mind when seeing them this time was how crowded the small stage looked as the band consists of six members and four of them (the three guitars and the bass) were standing in the front, the keyboarder squeezed between them and the drums. TotalSelfHatred is one of the black metal bands not using corpse paint or any other accessories in their looks or live show but they still kept it black metal with the stage being only dimly lit, minimum movements and no announcements. There were not so many people in the audience yet but a few dozens were scattered around. One thing that contributed nicely to the whole atmosphere were reflections of the mirror ball that hung in the middle of the room which bathed audience and band in a very special light and created a quite artistic picture with the pattern of the wallpaper. 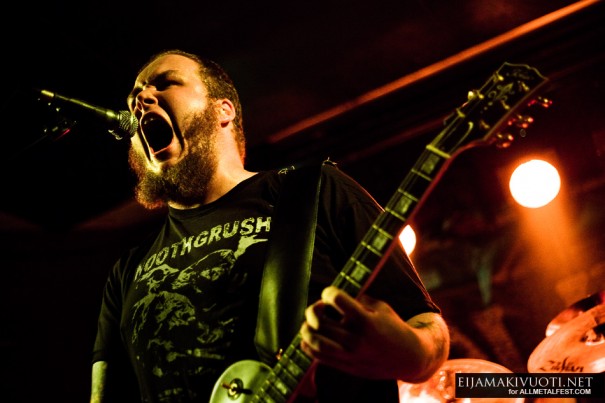 The crowd reacted minimally with some occasional nodding to TotalSelfHatred’s restricted stage show and their slow depressive black metal which doesn’t say much about the crowd liking the band or not but Finns and especially people in Helsinki are a tough crowd due to being spoiled with so many concerts and festivals happening all the time. So for this crowd to show some more reaction at a small concert during the week it needs quite a lot. Despite that it was pleasant to listen to them and watch them as the music was to the liking of yours truly. But maybe they were not the best match for such a progressive band as Negura Bunget that probably almost everybody was waiting for and TotalSelfHatred playing their type of black metal in a traditional way. As already mentioned, the first 20 minutes were dedicated to their slower material and the only action on stage was when guitarist C. suddenly disappeared apparently to get his plectrum back that had fallen off stage. Tempo and movements accelerated when TotalSelfHatred turned to their faster material for the second half of the set. The crowd did not show much more reaction, maybe some slightly faster nodding here and there but the band wasn’t bothered by that and let their own not to be scoffed at amount of hair fly. Overall it was a solid set that brought nothing really new neither music nor show wise but it was still very enjoyable with a good atmosphere to it. 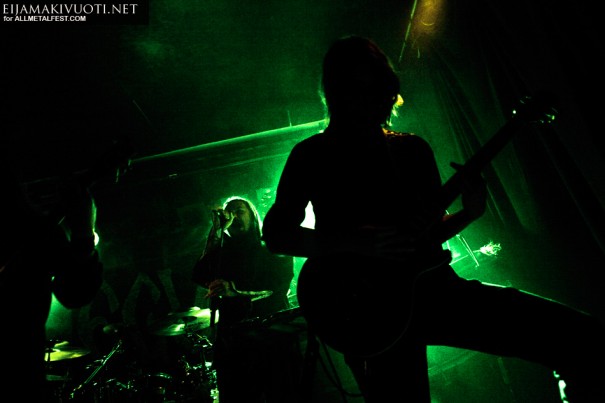 After the break finally Negura Bunget from Romania got on stage 20 minutes late. It was clear that they were the band everyone had waited for and the audience had multiplied so that the whole stage side of Kuudes Linja was crowded. The stage was also very populated with Negura Bunget as well having six members and various instruments besides the usual ones but for some reason it looked less crowded than with TotalSelfHatred as Negura Bunget didn’t have four members standing in line at the front of the stage. Anticipations were running high to finally see this band live in Helsinki as it had taken them 16 years to play here – not once since their start in 1995 have they visited Finland. Also yours truly was excited to see them again and this time with a full line up as the last occasion was back in 2007 in Hamburg where they played with a reduced line up due to the bass player of the time being too sick to play. 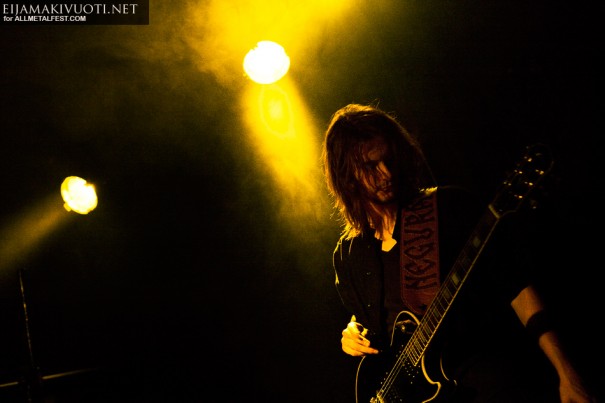 This time all the members were present even though it was basically a new band playing because of the split between the three founding members in 2009 that resulted in only drummer Negru being left of those three. This did not bother the crowd as they greeted all members with a loud welcome. The band also seemed very excited to get on stage and from the first song on they were head banging and vibrant with energy – especially the female keyboarder Inia Dinia was swirling around her beautiful hair in a hypnotizing way. As Romania is not your typical metal country Negura Bunget are not your typical black metal band. They are one of those bands that doesn’t only evoke emotion and create an atmosphere but they can paint a whole picture, a landscape, a feeling of being at a totally different place than you physically are. Their songs tell you a story despite most of us not understanding the lyrics because let’s face it; Romanian is not the language you just pick up on the way. But the language adds another layer to the mystical atmosphere of their music. 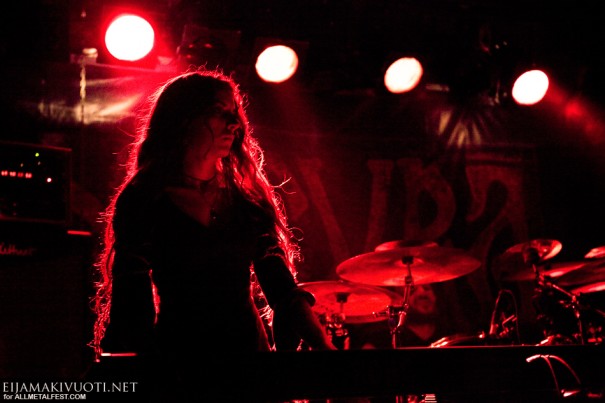 It was a pure pleasure to watch and listen to them and the crowd reflected that feeling after every song and it never got boring: It was almost difficult to keep up with all the different instruments they were using from a several meter long wooden horn to pipes and the xylophone that Ageru Pamîntului used to Gadinet putting his bass away to play the pan pipe. And then there was the richly ornamented wooden percussion board that was framing the stage on one side. When that was played you could also see that the stage was almost too small for the whole group because the free hanging plank started swinging back and forth so much it bumped against the microphone several times. A band with this many members and different instruments is always a challenge sound wise but this time there was nothing to complain about. 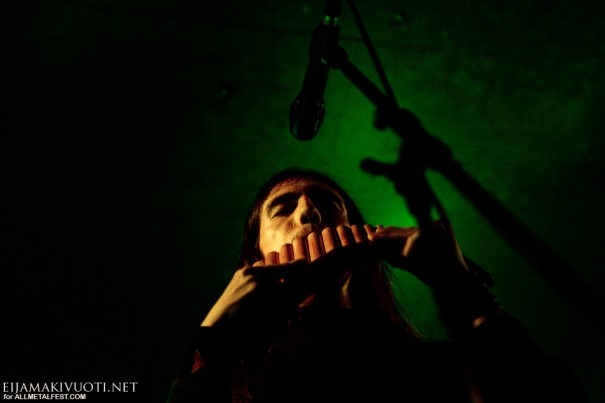 One example for their above mentioned ability to create a dense atmosphere and take you to another place is the song “Pamînt” from their 2010 album Vîrstele Pamîntului that they played in Helsinki as well: An almost dark stage, bells that reminded of goats or sheep on a meadow, pan pipe melodies supported by the keyboard, then some single notes from another flute until beats from the wooden percussion board came in followed by low spoken words that were increasing to chanting and with a more and more driving bass line and faster beats from the percussion board finally leading up to the climax: Suddenly there was light, hair flying, guitars and drums and screaming. Then things slow down with almost conciliatory melodies just to pick up again towards the end. Not understanding the lyrics this song leaves you exhausted, with a feeling of having made it from the calm before a storm to experiencing its full force and then seeing the same landscape glittering wet from rain and golden in the sun light after the clouds have gone. 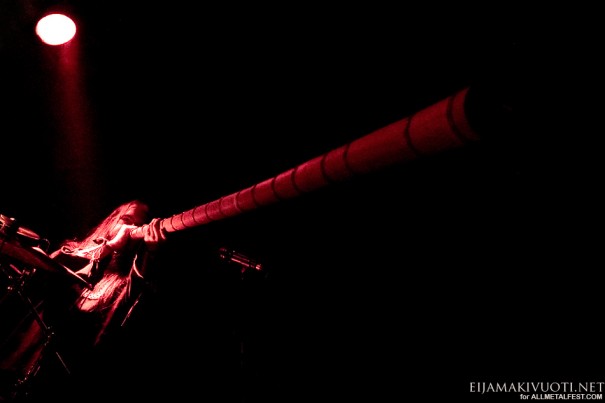 In the middle of their set they encountered some guitar problems but fortunately it only took a few minutes to get things in order again. And it seemed as if the involuntary break came at a convenient time for the Finnish audience as they were all but running to the bar to get a fresh drink. The second half of the set did not lose anything in terms of energy, atmosphere or excitement to the first half and so it seemed like the concert had only just started when the last song ended and the band left the stage. Despite the usual habit of leaving as soon as the band is off stage the crowd stayed and shouted for more – this being the best sign to show how much they had enjoyed the gig. But there was no time for more as Kuudes Linja turns into a disco after 11 p.m. so the only thing left to do was to grab a shirt from the merchandise booth and head back out into the cold night, sweaty, with an aching neck, knotted hair and a feeling of only slowly returning back to earth. 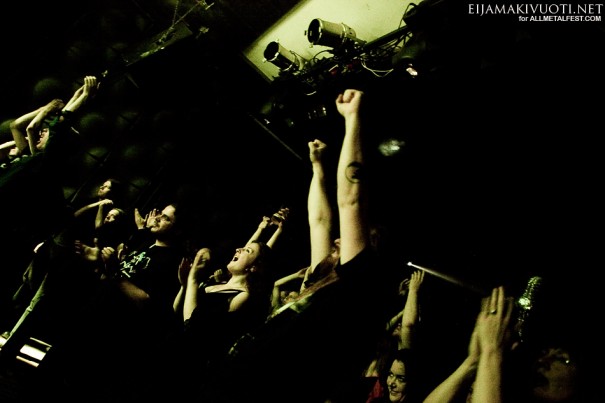