A park near the University of Nijmegen is for the second year in a row for one day the place to be in the Netherlands when your heart goes out to metal. Fortarock – The Festival is beautifully located in this small park in the middle of the city, and because of the size of the fest it gives a very intimate atmosphere. On the third of July approximately 5.000 metalheads got together to watch the following bands perform:
Textures, Ex Deo, Hail of Bullets, Decapitated, Watain, Baroness, Behemoth, Ensiferum, Fear Factory, Kreator, Killswitch Engage, Suicidal Tendencies and Bullet for My Valentine.

With over 30 degrees Celsius and humid weather it was one of the first really hot summer days in the Netherlands and there were predictions of rain or thunderstorms later that day.

We arrived at the festival around noon. Before the entrance one of the sponsors was giving away free energy-drinks, which you had to finish before going through security (no own drinks allowed at the fest). Luckily for the crowd there was a fairly long line of people waiting to get through security so enough time to finish your drink . We could skip the line and were inside in no time. At the security-check we were handed a bag with the program, a promotional cd and some flyers. 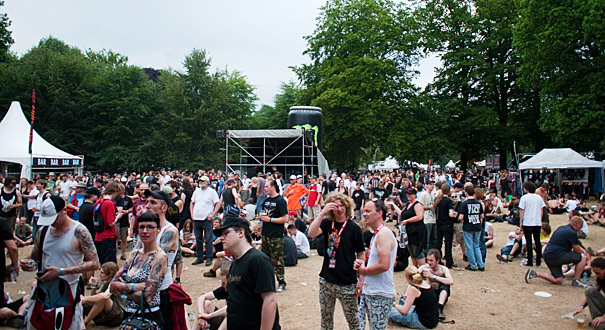 When we entered the festival, the first band of the day, Textures, was just about to finish their set. So before changing our euros for food/drink tokens we decided to see them play their last songs. Textures play a progressive math-metal style (something in line of the music of Meshuggah). We didn’t see enough of the set to say anything about it and that’s a pity, because this was their first gig with the new singer.

After Textures finished their set, we bought tokens which you needed to buy food or drinks. There was no atm at the site, but at the token-office and most merchandise-stands you could pay with your bank-card. One token cost you €2,30. This token could be split in half, so one normal beer (small) was one token, a big beer (0.4l) 1,5 token. Normal drinks (small bottle of water or a glass of soda, wine and the likes) were all 1 token, and mix drinks / energy drinks cost you more tokens.

For a fest of this size there were plenty drink-stands and a good range of food-stands. For example, you could choose from the “simple” fries / hamburger (or Dutch fast-food kroketten and frikadellen) to BBQ-grill, Vietnamese food, Surinam food and Mexican food. There even was a fruit(cocktail)stand. Prices depended on the food you wanted. The fries were very cheap. A large portion was one token. The Mexican, Vietnamese and Surinam meal were more expensive. They started at three tokens. But snacks (like two Vietnamese egg rolls) were only 1,5 token. To be short: there was enough choice of food for different prices. 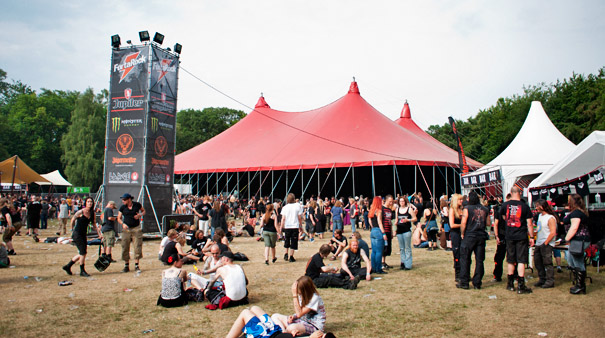 Also cool at this fest, there were enough places to sit down if you didn’t want to lie down in the grass. Very convenient for eating! Okay, one more cool thing: because of the weather-predictions (we are not used to these temperatures), you could get free drinkable water near the sanitary facilities so you could fill your glass or empty bottle. All this to prevent dehydrated metalheads of course, because no matter what, we usually keep on drinking beer. By the way, the toilets were clean and there were more enough of them.

At the site there were merchandise-stands, and a metal market. Didn’t buy anything though Lukas the photographer bought two extra shirts. 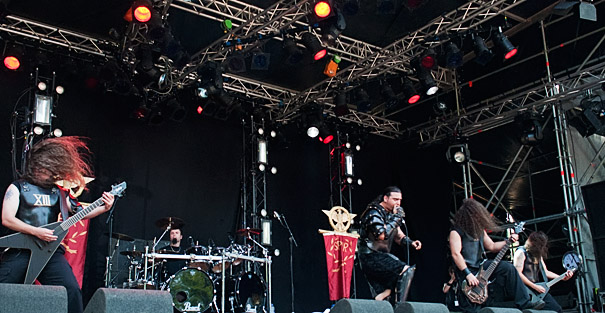 If you wanted to, you could see all the bands play without overlap. When a band in the marquee was finished, the outdoor stage started and vice-versa. So, after Textures, buying tokens and drinking a cool beer it was time to head to the outdoor stage to see the second band of the day, Ex Deo. Epic Death metal. I read in the program that Ex Deo is in fact Kataklysm (singer and three band members) and this is their side-project. If I didn’t read it I would never have guessed that this was in fact Kataklysm playing a completely different musical genre. From what we’ve heard they sounded nice. 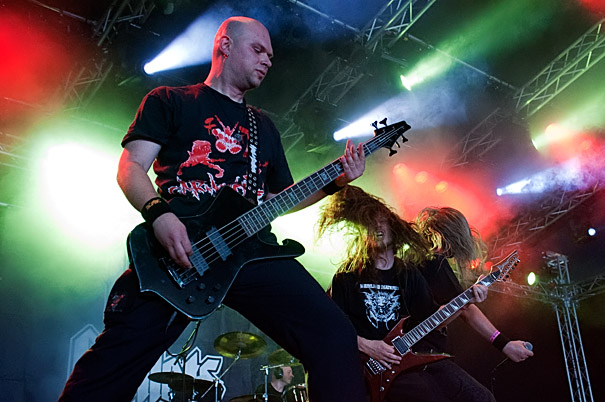 After Ex Deo it was time to find some shade in the marquee. Unfortunately it was also very hot in the marquee (duh…) but it was worth the heat because the next band was Hail of Bullets and they kicked ass. I like their style of old school death metal and they played very convincing. Hail of Bullets consists of former members of Asphyx, Pestilence, Gorefest, Houwitser and Thanatos. I really enjoyed this set.

After the straight-through death metal of Hail of Bullets it was time to get even more brutal. On the outdoor stage some very special guests were waiting to kick off their show. Decapitated. Who would have ever thought that we are going to see this band play live again? Three years ago in a very tragic road accident their drummer died and the singer went into coma. After he came back from his coma he decided to try to get the band together again with a new drummer and today is the first time since that tragic incident that they play in the Netherlands again. And man, they gave everything today. Brutal death metal of world-class with a very enthusiastic crowd participation.

Lukas the photographer went already to the marquee to get a good place in the photo-pit at the end of the set of Decapitated. So he missed probably the strangest metal-act of all time. From time to time, somewhere at the festival-site, Blaas of Glory did a performance. Blaas of Glory is a wind band and they played 80ths metal-covers (of course with very funny eighties – outfits). According to the pictures I saw after the fest, later that day Lukas had the honors to see them play live somewhere else on festival site. After watching Blaas of Glory for about ten minutes we headed to the marquee to see Watain. 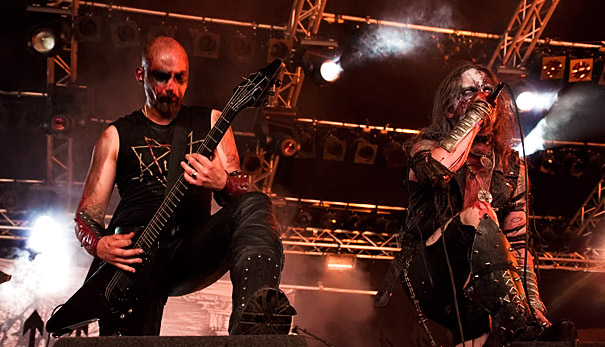 The black metal fans could be happy. As replacements for Deicide who cancelled their show (seems like they cancel more shows than actually play them) Watain was one of the two black metal bands of today and they gave a good and gory performance. I warned Lukas beforehand to watch out during this gig because Watain has a reputation of making a mess with pig blood. So when Lukas got back from the photo-pit he was covered in what I hope for him was fake-blood but I also heard Watain smuggled some pig blood from Germany to Nijmegen… We were standing more to the back, and from where we stood Watain sounded nice but no more than that. Still, many people I spoke after they finished their set were very enthusiastic so probably it was a good gig. 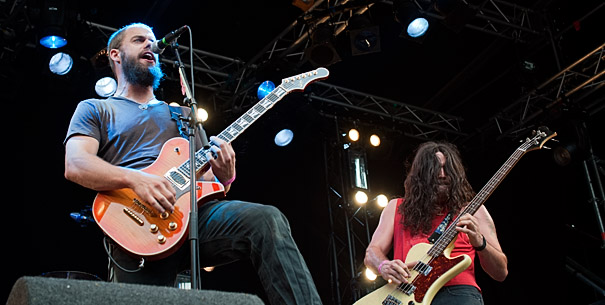 For the black metal fans Baroness was probably nothing more than a pause-act, because at the marquee Behemoth was supposed to start playing after Baroness. But the gig started over 20 minutes late. They had a very good excuse though, since they only arrived at the festival 5 minutes before their designated playing time. At the airport in Dusseldorf they had some hassle with customs and missing gear. So it’s a kind of miracle they played after all.
Despite them being late, they gave a very solid performance and with brutality they poured their fast raw black metal and technical death over the crowd who loved it. Good performance! For one reason or the other we were not allowed to make pictures during this gig (maybe they had a bad make-up due to their late arrival at the fest?). 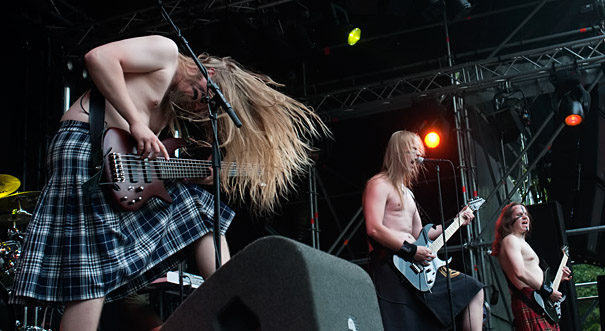 After Behemoth it was folk-metal time. The honors were to Ensiferum to be the flag-bearer of this genre today. After getting something to eat we headed to the stage to see them have a good party and watched the last 3 – 4 songs. 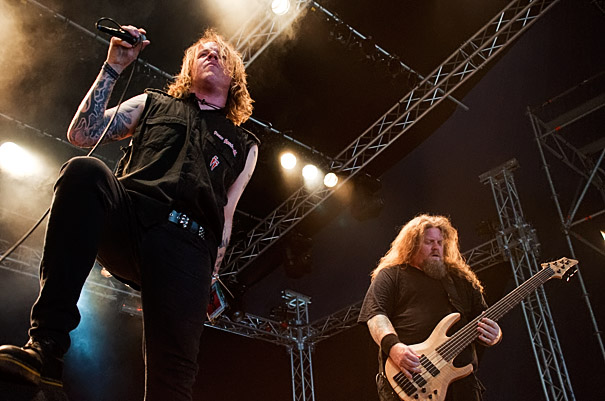 Then it was straight back to the marquee to see Fear Factory. Eleven years ago was the last time we saw them live and I was very curious if they could still do the trick. For me they only have one outstanding album, Demanufacture, which I recon to be one of the best of the nineties. So when their set went on and on without any songs of Demanufacture, my hope started fading. Not that they didn’t play well, because there was nothing wrong with that. Beforehand I was warned that Burton C. Bell had some bad shows the last weeks, singing completely off-line, but today it wasn’t that bad at all. And then…. It happened… “We have three more songs for you!” and those three songs were all from Demanufacture…. (Demanucture, Self Bias Resistor and Replica). I got some goose-bumps and shouted my lungs out those last three songs. Amazing and so cool to hear these songs live again! Also very cool to see Gene Hoglan playing drums for Fear Factory. 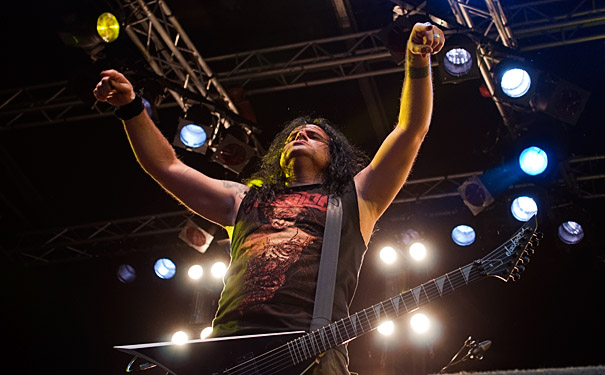 After Fear Factory we headed back to the outdoor stage, to see Kreator unleash a good portion of German trash metal upon us all. They were in a good mood, because just before they got on stage Germany defeated Argentina with 4-0 in the Football World Championship in South Africa in the eight-finals. I love German Trash metal and they gave a solid performance. Funny though, when halfway through their set they started playing “Enemy of God” it started to drizzle. The drizzle fairly quickly became a down-pour and since we are all made of sugar we decided to shelter in the marquee. When Kreator played the last tones of their set the rain stopped again. 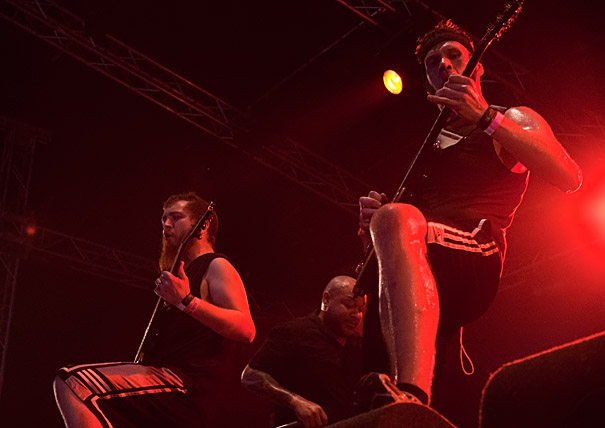 Since we already were in the Marquee, we saw the Killswitch Engage show. Usually this kind of metal is not exactly my favorite, but I stayed and watched the entire set. I think it says enough, they played very good. Last song of the set was a tribute to Ronnie James Dio: “Holy Diver”. 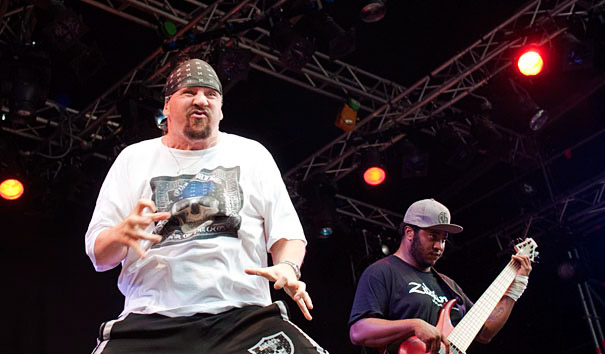 And then, one of the bands from which I heard so much and influenced so many other bands but for whatever reason I never saw them perform live. Of course I’m talking about Suicidal Tendencies. Crossover-metal and I enjoyed this show. They were full of energy, everybody on stage and in the crowd had a good time. During the last song the members of Decapitated and Fear Factory joined the band and it was very fun to watch the chaos on stage. Of course the drums had to be trashed at the end of the set. I think Suicidal Tendencies enjoyed this gig at least as much as the crowd did. 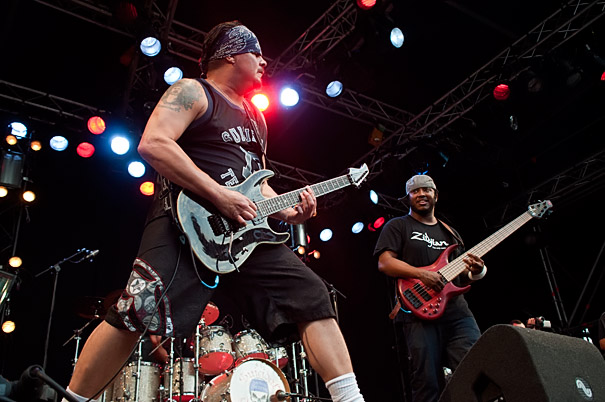 For us the day was almost over. I wanted to head home, but Lukas the photographer wanted to make some pics of the last band of the day: Bullet for my Valentine. I watched this band play but for me Suicidal Tendencies were the headliners and I don’t like Bullet for my Valentine. So I’m not going to write negative things about them, because maybe they played well but it’s music where I don’t have a “click” with. 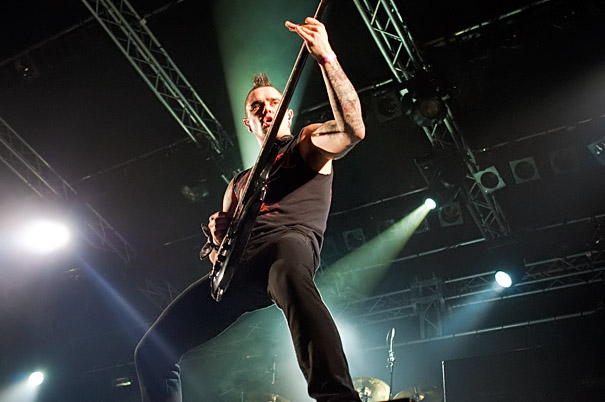 A few minutes later we were heading to our car and drove home.

After a more then successful first edition in 2009 the organizers of Fortarock did it again. They extended the size of the festival, but kept it in proportion. It stays a very cozy festival, with a fantastic and positive atmosphere. All the bands we saw today gave their best effort and played for 110%.

If the organizers keep this level of organizing up and try not to grow too fast and try to keep the special atmosphere this fest has, I will come back for many many years. 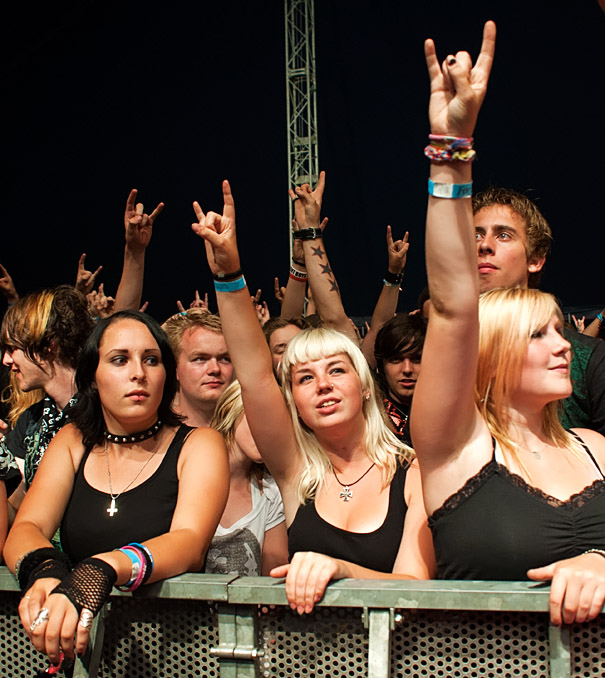 The organizers wrote on their website: Thanks everybody for an amazing day! Thumbs up for everyone! I think that’s a great conclusion, and as a visitor I would like to say the same!