On Friday-afternoon we drove to the festival in pouring rain. We were preparing ourselves for a very wet weekend but, just before we arrived the rain stopped. With the exception of a few drops of rain on Saturday the weekend was dry and sunny! At the campsite we teamed up with another friend and started our metal-weekend in the Frisian fields.

The campsite was right next to the festival-entrance and my guess is there were about 100 – 200 metalheads staying in the campsite. The campsite is very small and very cozy. We met some great people. Thanks for the fun on the campsite Harry and Metal Mom! 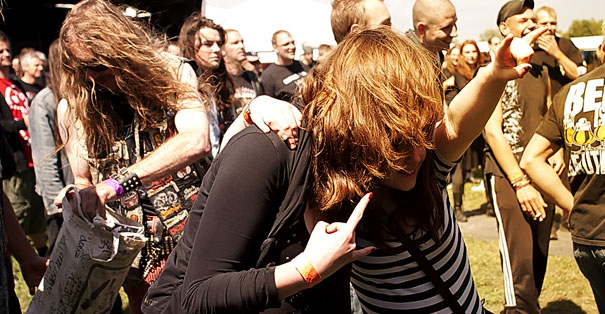 New this year was a second stage (Marquee) and one extra day (Friday-evening). On Saturday the Marquee stage was programmed in collaboration with the Belgian Metal Female Voices Fest, which means that only female-fronted bands played the Marquee on Saturday.

For the Friday-evening program only the Marquee was used and with three bands on stage this evening, it was more like a warming up or pre-party for the next day. We have no problems with that though, since we love pre-parties.

The evening started with Methusalem and they played old school heavy metal. The next band was an AC/DC-cover-band: Highway to Rosie. Nothing special though, just a fun band good for drinking beer on the sounds of AC/DC. Last band of the evening was cover-band Prime Suspect. I don’t know who (and why) invited them, but they were completely out of place (for the Dutchies: when a cover-band starts playing “Marco Borsato” at a metal fest then you ought to be kicked off the stage). Instead of kicking them of the stage ourselves we decided to head back to the campsite, drink another beer and call it a day. 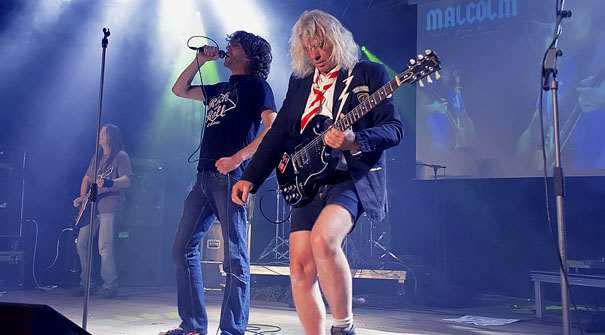 Saturday: I woke up an hour or two after the rest (that’s kinda normal). As we drank all our beer the evening before, they were waiting for me to fetch the car and head into Dokkum to the supermarket. So after I had a quick plunge of water in the face we headed into Dokkum to get some beer and other stuff. After our trip to the supermarket we stayed at the campsite for an hour, two or three, having lots of fun with everybody. Due to this we completely missed the first band of the day. We are so sorry for that Skeptical Minds. Since the campsite was situated next to the festival site, we could hear them play. From what we’ve heard they played fine.

This band plays a mix of grindcore and metal and overall it was a nice band to start our day with. They only played half an hour and after that it was time to see Lahannya in the Marquee. We were pleasantly surprised by their gig. With their musical mixture of gothrock and industrial and their stage-presence they ought to be higher on the bill. For me they were one of the better acts of the day and definitely a band with a lot of potential. Too bad there were still not so much people and the crowd-participation was a bit lame but that is what you get so early in the afternoon. 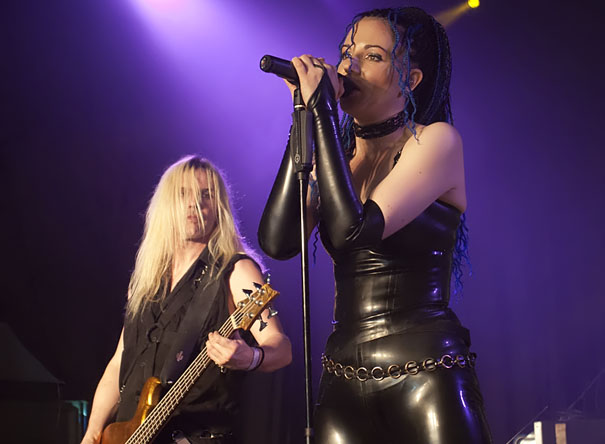 After Lahannya it was time for the second band on the open air stage: Inhume. This band from the south of the Netherlands had a great gig. The first pit of the day was created and the safety-fence in front of the podium was dragged down. The band played very good and gave 110%. They played a mix of grind and metal. 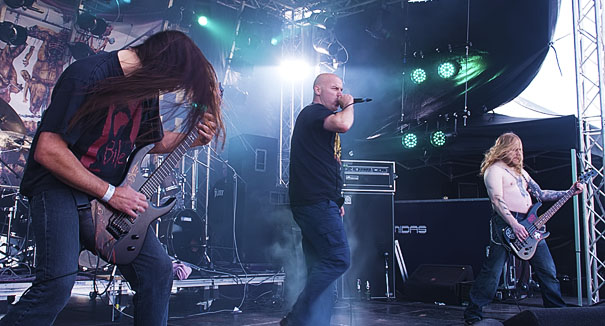 Since we wanted to see (or tried to see) all the bands of the day we went straight back to the Marquee when Inhume was finished. In the Marquee Dejafuse had already started to play. It’s the new band of the ex-singer of Autumn, but not really our thing. Pop/Rock sounds and why do you have to wear sunglasses on stage in the Marquee? I think we only saw the first song and then decided to head outside and hang around a bit and take a look around at the festival site. For a festival of this size everything was pretty well organized. There were two food stands (the usual stuff, i.e. Hamburger, Pommes Frites, Hotdogs and so on) and two large drink stands (one outside and one in the Marquee). We never had to wait for our food or beer, which was very pleasant! For one token (2 Euro) you could get a beer / coffee / Coca-Cola and the likes / french fries / hot-dogs and for two tokens a hamburger. On the other side of the terrain there was a small metal-market and a merchandise-stand. We didn’t buy anything this time though.

Not so long after Dejafuse finished their set, Picture made their appearance on the open air stage. Claimed by many to be the first real metal band from the Netherlands (founded somewhere in the late seventies) they played a nice bit of old school heavy metal. Unfortunately during this gig it started to rain so we didn’t see the entire gig since we sheltered in the food stall and the Marquee (it was time to get some food anyway). 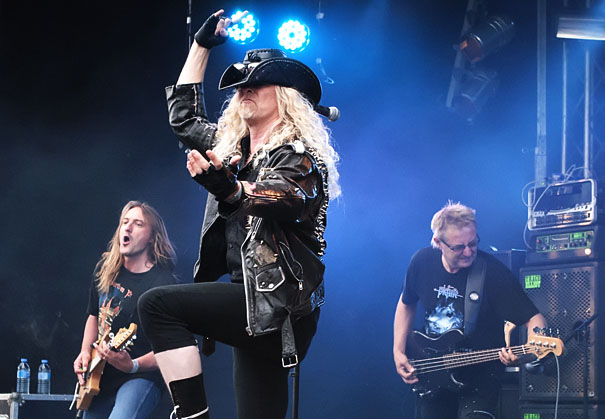 In the Marquee Stream of Passion started to play. A few years ago I saw them live, and I wasn’t impressed back then. But as things can change, this time I was impressed. Was it the new material or was the band playing much better than last time I saw them? I don’t know but it was a nice gig and I stayed until Trident started to play on the open air stage. I was very curious to see this band as this was their first gig outside Sweden and the band has some (ex)-members of Dissection and Necrophobic. Their style is blackened death metal. Probably their gig would have fitted better in the Marquee but overall it was a solid show and their material sounds nice. I like to see this band again somewhere someday.

After the blackened death-metal, it was time for Manic Movement in the Marquee. Completely different from Trident but nothing wrong with this band and they played a solid show.

After this we headed back to the open air stage for Nightmare. I have to confess I never heard of this band before and when I was checking the band I listened, by mistake, to the Japanese Nightmare. But this band is from France and wow, they really got the crowd going. Very enthusiastic, climbing in the stage-poles and you could tell they really had a lot of fun on stage. Also Nightmare apparently were a big fan of the recently passed away Dio as they played one of his songs in tribute of the legend. This was the second surprise of the day! 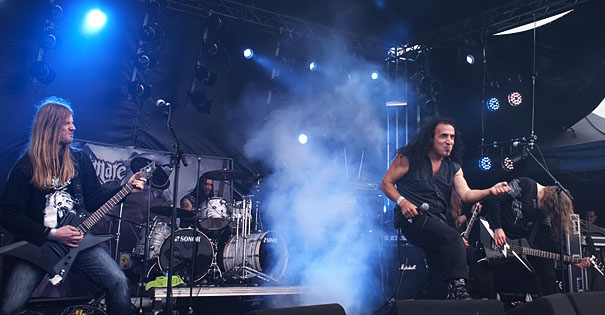 Back to the Marquee for the next band, Diabolus in Musica. This gig was their first outside Spain and just like Manic Movement earlier that day, that their gig went well but I have to say that, though each band programmed in the Marquee has its own style, most of the bands on this stage sounded a bit the same to me. Nothing wrong with that though, but some more variation would be welcomed (not all female fronted bands sound the same, like later that day with the gig of Dylath-Leen). 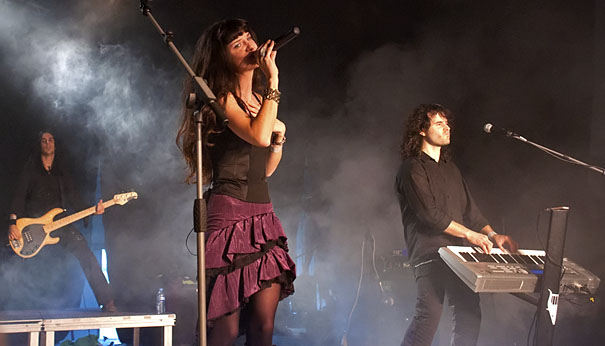 Open air stage: 3 Inches of Blood! That was one of the bands I HAD to see. 5 years ago we stumbled on them by accident at the Dynamo Open Air fest and man we were blown away. Since then we haven’t seen them anymore so our expectations were high. 3 Inches of Blood gave a good performance but in my opinion they miss their old “grunter” on stage. The blandness was also partly due to the whole setup of the sound as the vocals of lead singer Cam Pipes were pushed into the background which was a shame. The guest appearance of Tuomas Pekkola from Trident did help to create some extra mass in the vocals of the songs but not nearly enough to blow us away. It was nice to hear all these songs like “Deadly Sinners” again and the crowd was very active during the gig. 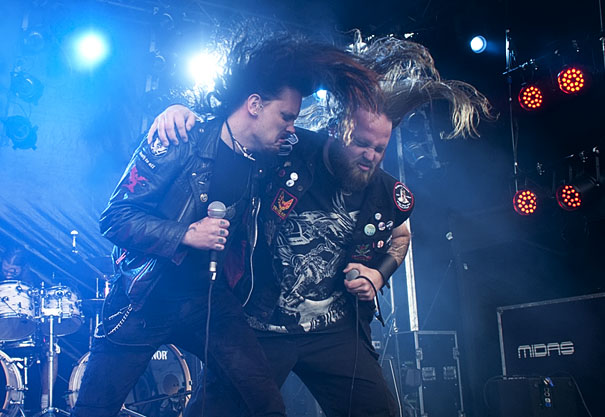 Like I stated above in my comment on the Marquee stage, not all female fronted bands sound the same. Dylath-Leen conquered the Marquee with a brutal set of death metal. Fast with brutal vocals which were at times bringing back memories of the vocals of Talena when she was singing in Kittie, third surprise of the day! 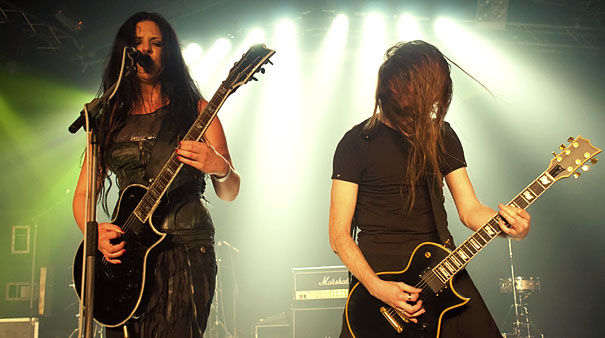 The Haunted: The Haunted are through their singer kind of a split personality appearance. Peter Dolving sounds and appears like any friendly casual guy until he gets into his songs. Bordering a complete manic breakdown he is giving his best making probably any gig one you will remember. 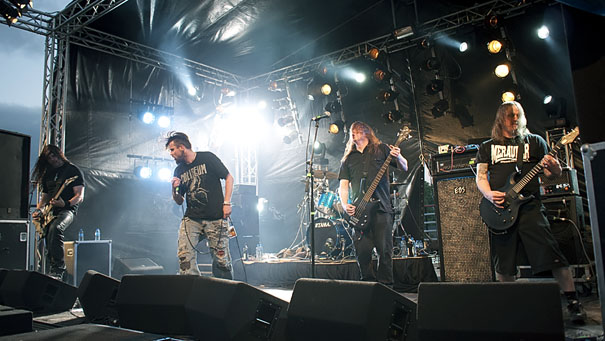 ReVamp is the new band of the ex-singer of After Forever. Good sound, good artists, but the material of After Forever had something special that this new band is missing. Maybe the same story as with Stream of Passion, a new band needs to grow. Also ReVamp had the added discomfort of having experience with way bigger crowds, they also had trouble getting their music correctly through the speakers. The volume was way too loud for the Marquee, every good sound tech is aware of difference between playing in a tent or on an open field. It wasn’t bad but by far not the best gig of today.

Destruction were finishing off the day and though their style feels really old school they do manage to keep you awake and not only by playing really loud. Oddly enough they were also the only band that used some stage props like really cool mic stands and some decor pieces. Not a bad idea since a three piece band can make the stage look a bit empty. Solid work and a worthy addition to the line-up but expectations were higher of a headliner. After this it was nighty night and back to the campsite. 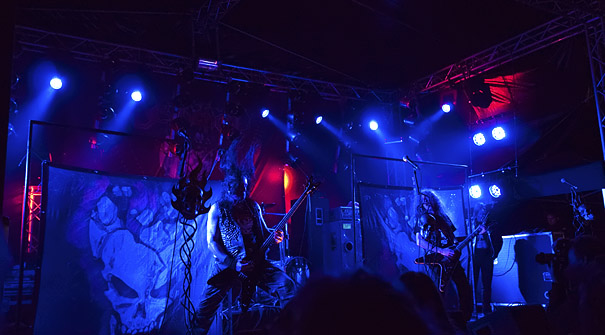 Next morning unfortunately there was no more running water on the campsite so as smelly as we were we headed home with a big smile and small eyes. Yes, it was a great fest. Atmosphere was great, friendly and crazy people, good music, the weather was fair, a great way to spend a weekend! All in all there were about 1.300 attendees on Saturday and according to the organizers everything went well.

Dokk’em, we’ll be back next year!