Deicide and Tankard are among the bands that will perform at the Devilstone Open Air 2010 festival held at Dainuva Valley in Anyksciai, Lithuania on July 16-18, 2010. 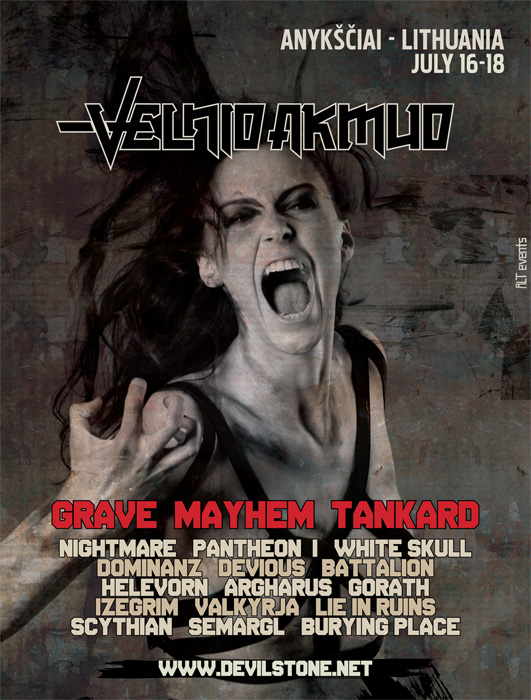 Devilstone Open Air is a unique, international, cultural-entertaining festival of alternative music, intended for the audience of different age that is keen on heavy rock music, cultural tourism, and active rest in the nature.

DEVILSTONE Open Air, Lithuanian metal music festival, apparently the biggest and the most rapidly growing throughout the Baltic States, will take place for the second time in Dainuva valley of Anyksciai, on July 16-18 of this year. Highly acclaimed for the prominent debut last summer, DEVILSTONE Open Air is looking to unleash a real storm with its second coming.

All together, up to twenty bands will share the stage of DEVILSTONE Open Air this year, the selection of which is most thorough & particularly attentive. Uniqueness, creativity and professionally performed metal music are the basic criteria set for the musicians to make the DEVILSTONE an exclusive weekend. Keep an eye for the upcoming revelations of festival line-up in coming weeks, and trust the DEVILSTONE taste!

Apart from live performances, other action will be presented on the second festival stage and all around the river site. Night Rockteques of purely old-school rock will make it sleepless. Volleyball tournament will
challenge to win a Devil’s hoof as a trophy. Workshops of crafts and other creative actions shall provide a feeling of art and culture, as well as the whole town of Anyksciai, rich of unique cultural heritage and
possibilities for tourists. Beautiful and untouched nature of the festival site in Dainuva valley is also one of the festival cornerstones – the location alone is worth the trip. One shall find a cozy campsite on the
bank of the river as well as a refreshing shadow among the tall pines… Finally, loads of beer and other seductions will no way be missing. There are all reasons to take this devilish challenge for the midsummer’s
holiday!