The 14th edition of annual open air festival BRUTAL ASSAULT is scheduled for the first week of August , in the concrete from 6th till 8th of August. The place to be is still the festival grounds of the Old Army Fortress in Josefov.

Brutal Assault Festival vol.14 is coming! Check out the Czech prime metal meeting, this time with such bands as BIOHAZARD, IMMORTAL, OPETH, ULVER, TESTAMENT, BRUJERIA, DARK FUNERAL, MADBALL, WALLS OF JERICHO and many others! The festival takes place in unique Old Army Fortress in Jaromer (130km from Prague) in the Czech Republic. 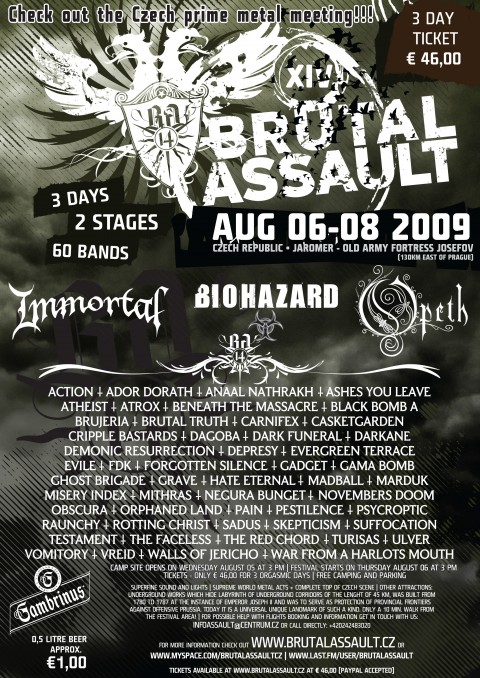 After the last year’s successful edition, which was visited by 13 000 metalheads from all over the world, the next volume is coming and promises next impressive experiences. From year to year the festival’s program is more and more attractive and promises more and more well-known metal crowd-pullers for all fans of various extremely musical genres.

The festival takes place in unique festival ground in Jaromer, in the Old Army Fortress called Josefov. Imagine musical festival to be held at an old army fortress! This place has a huge history and unique atmosphere. There are many parts of the fortress and one of courtyard will be used as the festival ground. The fortress was built 1780 – 1789 for the Emperor Josef II. It comprises ramparts (in the form of octagonal bastions), extensive casemates (to a length of some 45km, of which 5km are open to the public), the headquarters building, a hospital, barracks, the armory, the Church of the Ascension and houses. Jaromer is situated 130 km east of Prague, 20km north from Hradec Kralove.

As usual, at the festival are gonna be more than 60 bands from all over the world! Check the actual line-up (in alphabetical order):

Tickets available in presale for only 45 EUR for 3 orgasmic days! Ticket at the door is for 54 EUR. For more info regarding tickets visit our official websites: http://brutalassault.cz/en/tickets/.

The festival is starting on Thursday, August 06, 2009 at 3pm. Camping and parking nearby the festival ground is free of charge, open on Wednesday, Aug 05, 2009.

More details will follow soon, so stay updated by subscribing our Email newsletter or to the RSS feed

Pestilence – Out Of The Body (Live)

Testament – Disciples Of The Watch (Live)