The 14th edition of annual open air festival BRUTAL ASSAULT took place in the first week of August from 6th till 8th on grounds of the Old Army Fortress Josefov, Czech Republic.

We had the opportunity to visit this year’s Brutal Assault Festival and we have to say it was a very pleasant experience. Read on if you want to know what to expect if you plan to visit this festival next year. 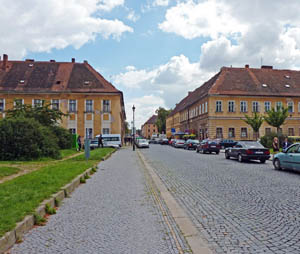 The Old Army Fortress is located in Josefov , part of the city of Jaromer at about 135 km from Czech Republic’s capital Prague and proved to be a great choice for a metal festival.

There aren’t any ATM machines in Josefov so for those travelling from other countries make sure you have cash with you. You can only pay with Czech currency Koruna (CZK) in the town, but on festival grounds you can also exchange Euros for coupons that you need in order to buy drinks and food.

The camp is located outside the festival entrance and it’s free. There is also an option for VIP camping for a fee of 400 CZK for the whole festival which It’s guarded and has its own toilets and depository space.

Once in the festival grounds you can change your cash for coupons, the value of one being a little more than a Euro. 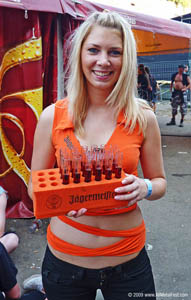 Overall the prices inside the festival grounds are fairly cheaper than on other festivals around Europe. As for the drinks, the cheapest beer would cost a coupon and you can also find vodka, rum and wine or alcoholic shots. We found and tasted them all or in the case of Jagermeister they found us as they were carried around by some nice orange girls like the one you can see in the photo.

The food is mainly fast-food type from hot-dogs to hamburgers and sausages, fairly cheap from 1 to 3 coupons and going up for more expensive ones. 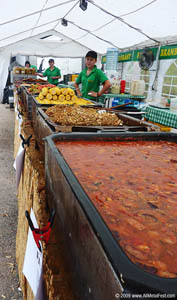 Almost everything was written in Czech and not all the vendors can speak English, but we found out that if it looked good it also tasted good.

Another attraction was the horror tent which screened a fine selection of horror films from the “Bible Black” anime to the great zombie movie “28 Days Later”.

The weather was good as they say but not if you want to stay in front of the stages most of the day in burning sun and high heat, not to mention the dust clouds rising from the circle pits.

There are two stages at Brutal Assault separated by one big screen. The bands play all day almost continuously and if there’s a break it’s just for a few minutes. 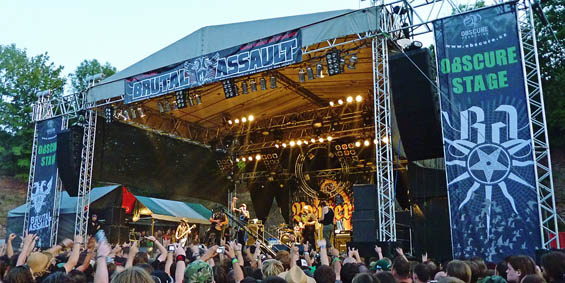 This year’s festival lineup was not as brutal as you may think. One would assume this is a grind-death-black metal festival only, but it’s not the case here. The lineup was pretty diverse with hardcore, metalcore, melodic, thrash and avangarde metal.

The sound quality was relatively fine for most of the performances, but on some occasions it could have been a lot better.

The lights were fine, but while the pink/magenta lights seemed suited for the Opeth’s performance it was funny to watch Marduk in pink light.

The first day brought on the stage some hardcore and whatever-core bands like Flowers for Whores, War from a Harlots Mouth, Carnifex, Madball and headliners Biohazard as well as more extreme bands like Sadus, Rotting Christ, Cynic and Brutal Truth.

We’re not going to review all the bands that played and instead we’ll just point out the highlights.

First of all Steve di Giorgio’s Sadus delivered a healthy dose of thrash and while some were waiting for a bass solo it didn’t happen. 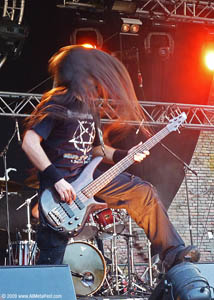 Rotting Christ show was as expected – epic with tracks from old and new albums.

Next stop NY hardcore: Madball. The performance was shadowed by the sound problems, but still it was enjoyed by the audience.

The Israel’s Orphaned Land performance was more interesting than we expected. Nice show.

We skipped Pain after the first 2 songs for some more beer and up next was another NY band: hardcore legends Biohazard who put up an excellent show and played songs only from the first albums which seems to be a trend lately. 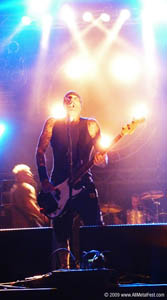 Drummer Danny was celebrating his birthday so they invited girls from the audience on the stage while covering Cypress Hill’s “I ain’t goin out like that” to which we moved to the other stage where the crowd was already shouting Brutal Truth!

The US grinders delivered an amazingly brutal grindcore and played nonstop from start to finish. This one and the Cynic performance were the best for us on the first day. 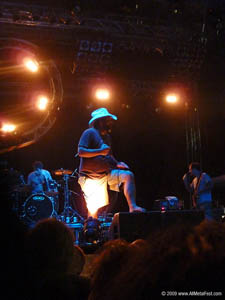 Turisas was a welcomed break for dinner and more beer.

Up next were the progressive technical pioneers Cynic with a great deal of technical problems. The setups between the tracks seemed to take longer than the track itself, but once past that it was probably the best set from the first day. Be sure not to miss them if you have the opportunity.

Last band Mithras surprised the ones still up at that hour with a very good death metal and an amazing guitarist Leon Macey. A band that never made it into the mainstream death metal pack but they sure deserve it. 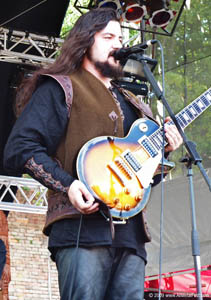 Negura Bunget up next with a new lineup that didn’t seemed as experienced as the previous one. There was a little drama going on with this band concerning the lineup similar with the Gorgoroth situation and the Fear Factory one, just not at those proportions. 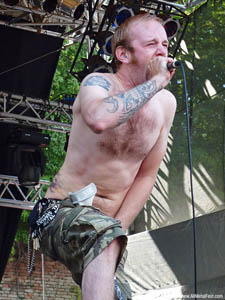 More beers, more sun and another band from Sweden: Gadget. Fast and powerful grindcore the way it should be. They got a great crowd response and a circle pit that raised the dust from the ground right into our beers. They clearly deserve a better spot and more play time.

By the time Grave hit the stage the heat became unbearable so we watched the show on and off. Similar with the Vomitory set Grave brought us some good old death metal and finished the performance with all time’s classic track “Souless”. 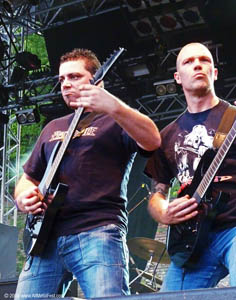 Atheist delivered a decent performance, but not up to the standards and the same can be said about another reactivated band Pestilence.

The day went on with Brujeria, Opeth with more funny jokes from Mikael Akerfeldt and then Testament with their classic thrash tunes that can never go wrong. 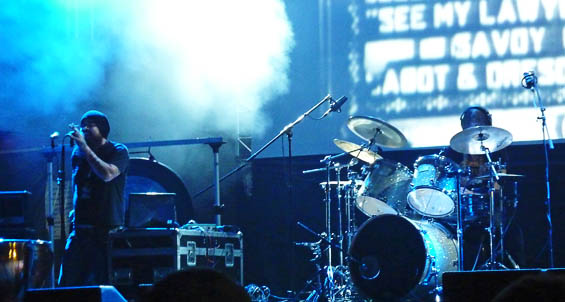 We started the day with Agathodaimon, Gama Bomb and Ashes you Leave.

Gama Bomb had a nice energetic show and made a good impression despite the early hour. 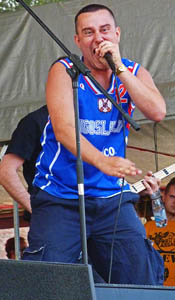 More beer and grind at last with Italian band Cripple Bastards. Fast hategrind since 1988 with punk influences, a tight, passionate and insane performance. Great live band, so good that the next few bands paled in comparison.

The Faceless and Hate Eternal are good bands but their performances were nothing special and sounded quite messy especially the Hate Eternal set. 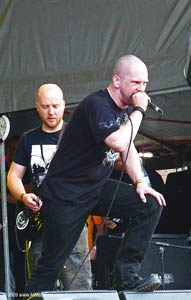 Misery Index had a good show with a varied set that can’t get you bored.

And that brings us to another highlight of the last day, UK grinders Anaal Nathrakh, one of the best performances of the festival. They started with songs from the last album “In the Sign of the Black Widow” and finished with tracks from the first album “The Codex Necro”. Fast hyperblasts, intense show and great crowd reaction, an outstanding performance!

Atrox had the misfortune to play between Annal Nathrakh and Suffocation so they had just a small crowd in front of the stage. 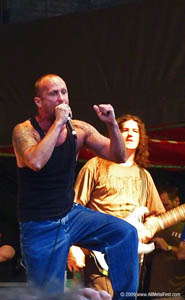 At the other stage people were already gathering for what turned to be the best show of the last day. Suffocation entered the stage and delivered an extremely brutal, technical and brutal show. 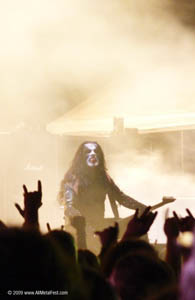 There isn’t much to say about the Immortal’s performance, except that it was a good excuse to get more beer and more food. Immortal gathered a huge crowd in front of the stage, but the sound was bad and the performance was nothing you’d expect from a headliner. We enjoyed a lot more the Marduk show even if the sound wasn’t much better.

US hardcore act Walls of Jericho got the crowd moving and a circle pit was formed right at the beginning of the show and kept on going during the show.

Skepticism was an interesting band but their slow funeral doom was a bit too much after that long day. 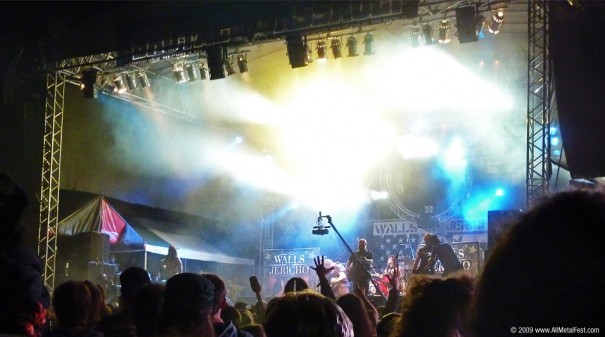 Don’t hesitate to visit Brutal Assault Festival if you have the chance, it’s a great festival and overall we had a fantastic experience. We strongly recommend BA for its extreme acts that we enjoyed a lot more than the headliners and of course the great beer.