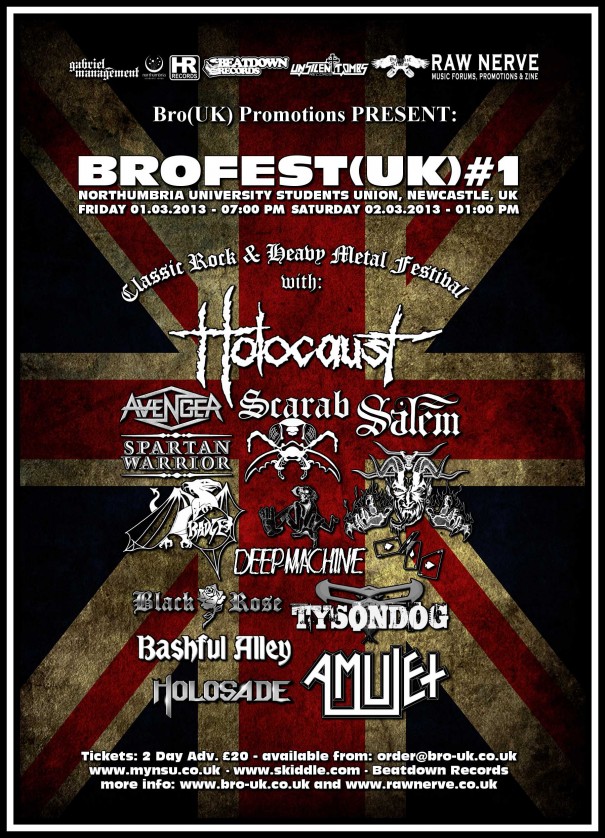 Brofest(uk) #1 UK marks the first edition of a new festival in the North East of England, celebrating the best acts in the increasingly popular New Wave of British Heavy Metal (NWOBHM) revival. The first edition of the festival features several bands from the wealth of NWOBHM heritage in the North East with BLACK ROSE, TYSONDOG, AVENGER, & SPARTAN WARRIOR representing some of the finest local talent. Taking a break from headlining metal festivals across Europe will be SALEM from Hull, playing heavy rock based on thundering rhythms, soaring twin-guitars and powerful melodies, whereas Darlington’s HOLOSADE represent the more thrashy element of the NWOBHM spectrum, combining the breakneck riffage of the likes of MEGADETH and ANTHRAX with more melodic passages.

The festival is also a very special occasion as it features the fist appearances on stage in nearly 30 years for local heroes BADGE as well as cult Midlands legends BASHFUL ALLEY and SCARAB. Headlining the festival this spring is Edinburgh’s HOLOCAUST a band who’s influence is well known – a cover of one of their songs even features on METALLICA’s “Garage Inc.” album! Young talent is not forgotten, and opening the show on Friday 1st March will be London’s BLACK SABBATH-inspired AMULET, making the pilgrimage to this Mecca of NWOBHM with fellow Cockney JUDAS PRIEST fanatics DEEP MACHINE. The show is being held at Northumbria University Students Union and features a total of 12 classic bands over the course of the weekend.

The festival line-up has generated enthusiasm from fans worldwide and will even be featuring as part of a German documentary following the resurgence of the NWOBHM movement, with the crew also filming the festival’s live DVD release. Brofest #1 is the brainchild of the likely lads at Bro(UK) Promotions, who are already responsible for a revival of their own, bringing top underground bands to the North East live music scene.

Tickets for Brofest are selling fast, so make sure you take advantage of the fantastic advance ticket price for this unprecedented occasion.