Sitting here on a dark December evening while the heaviest storm of this autumn and winter is howling outside, raging, letting the windows vibrate, the swinging street lights casting distracted shadows on the houses is just the perfect setting to recall last weekend’s gig with Beastmilk and Atomikylä at the legendary Tavastia. I had not been there for a long while now and I did not think much of it but when arriving to the venue in central Helsinki on the eve of Finland’s Independence Day on December 5, I was captured by the special aura this place holds despite not being the most conveniently laid out venue in Helsinki especially when it’s packed. The gig, organized by Fullsteam, started unusually early at 8.30 pm to make room for Tavastia’s weekend disco afterwards. Due to the early start and some pikkujoulu glögi merriment before, we arrived slightly late but still made it in time to catch opener Atomikylä’s first song. (Pikkujoulu means “little Christmas” and is something the Finns take very seriously. They don’t only have their companies’ Christmas parties but everyone has pikkujoulus everywhere with friends, family, work mates, hobby club mates, the cashier from their corner supermarket… possibly even with random strangers in the subway just to make sure there has been enough pikkujoulu-ing in December though it basically already starts in November and can go on until January or even February. Glögi is the traditional mulled wine that is served during these celebrations; optionally alcohol free, with wine or some stronger spirits – I leave it up to you to guess which kind we had been enjoying previous to the gig.) 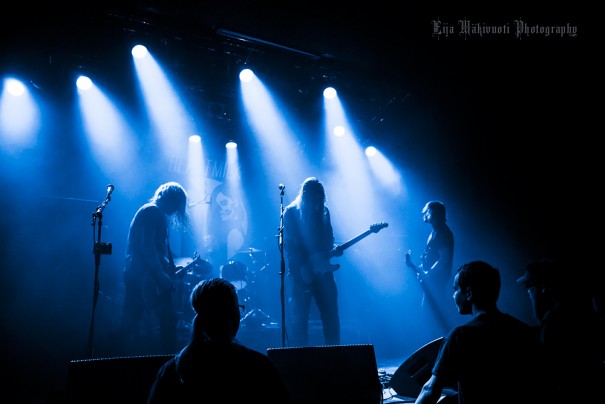 There was not much of a crowd which was probably at least partially due to the packed pikkujoulu calendars but there were people both on the bar and stage side, lounging around, hanging out and Atomikylä delivered the perfect soundtrack for that. Knowing that the band consists of Oranssi Pazuzu and Dark Buddha Rising members I was intrigued to see them. Though that at first proved to be not as easy as the stage was bathed in a deep green light and there was a lot of introvert, “hair-in-front-of-my-face” playing going on. The guys seemed to be in their own bubble on stage, unaware of the audience or unwilling to acknowledge its presence. But that was not necessary as they communicated through the sound tentacles they sent meandering off stage. Their music at first seemed like a tightly woven, at times random net that only disclosed its texture when you delved into it and allowed for the feelers to weave a cocoon around you. 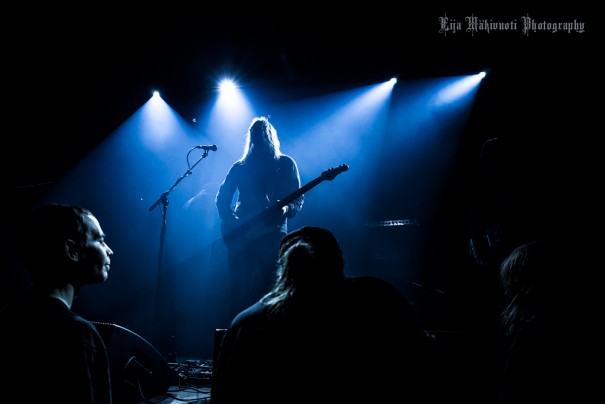 Melodies and tones were knit into a partly repetitive pattern that at first seemed to lull you in a false sense of security before Atomikylä almost unperceivably but steadily released the bass and the harsh vocals, and increased the intensity, density and volume until it was too late. Suddenly, it was in your face – a swarm of angry musical insects with the aggressiveness of hornets that exude the constant threat of stinging and hurting you while being mesmerizingly beautiful in an obscure way. The whole gig went along these lines of soft, warm elements and vocals being disrupted by harshness, playing with disintegration without being disconnected and always keeping the groove going. The play with and use of the volume was something not enough bands do except for as loud as possible and then lower for ballads or melodic parts. The way Atomikylä used this tool was something that will stick in my mind for quite a while.

More people arrived before Beastmilk were scheduled to start and the lines at the bar grew longer but everyone was queuing politely and in an orderly fashion so it didn’t take the bar tenders long to get everyone their beverage of choice. 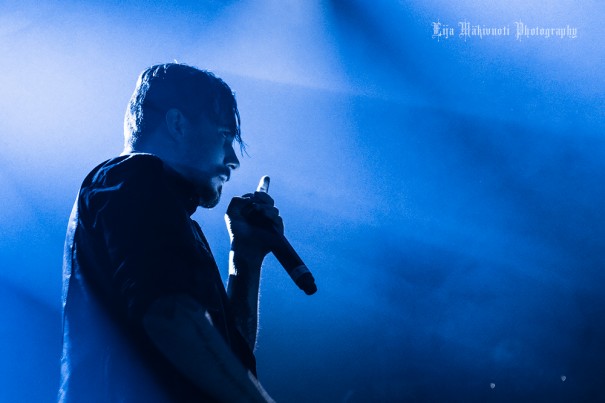 On stage the frame was set with the banner, two old TVs and the Climax skull greeting the audience. With the intro came the fog and white lights, and Kvohst’s characteristic voice started to cast its magic. I am not sure what kind of spell the band has infused into their songs but it seemed impossible to stand still, and even now my feet are starting to twitch and do a little dance remembering the gig. Now it proved an advantage that the place was not too crowded as it was possible to dance, jump, and pogo around and enjoy the music sweeping over you with every fiber of your body. Right in front of the stage, which admittedly is not the best place sound wise, the vocals were too low at the beginning and while it got a bit better throughout the set, they could have been louder. 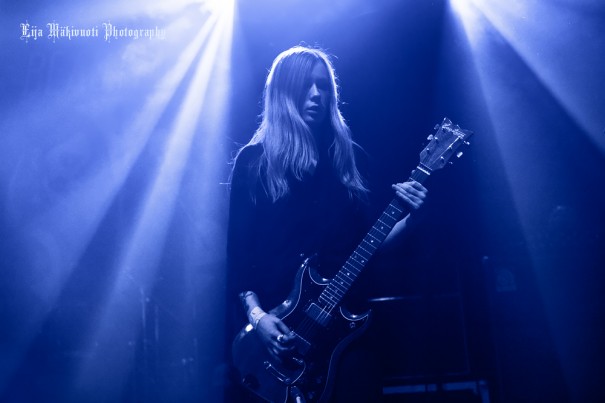 This didn’t seem to hinder the dance party and with their dark, driving, sexy sound Beastmilk evoked images of a slightly ratty but still rad rock club, sweaty cool people dancing and making out in the twilight – beautiful, velvety muted, ecstatic doomsday glamour gloom celebrations. And nothing could have been better than be under Beastmilk’s control as Kvohst declared, announcing the song of the same title. And with this carrot and stick approach of a driving pulse and silky melodies, the band seduced the audience through the gig, making sure they kept warm dancing even during the rarely live played Nuclear Winter despite this winter having been extraordinarily warm in Helsinki. The grooving rhythms made sure you moved, marched to the beat and dragged you along through the song if necessary while the smooth melodies caressed you, whispered sweet nothing in your ear and tasted of red wine and dark chocolate with a hint of cloudy full moon mysticism, and a drop of blood. 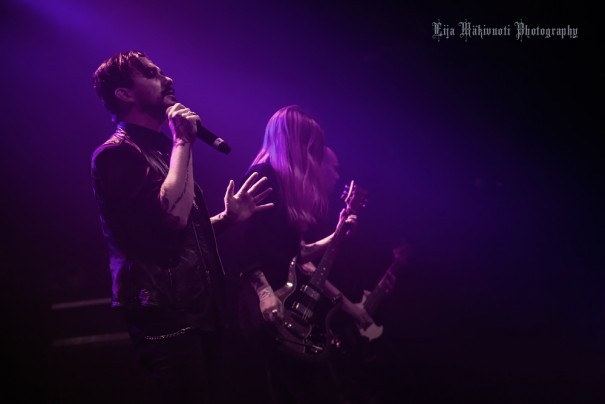 With their debut album Climax being just over one year old this might not have been the best gig Beastmilk ever played with the best sound they ever had, and not everyone liked it but for our little dancing crowd it was just the perfect match for our mood on that evening and the band seemed to enjoy playing as well and the feeling lingered on as our dancing feet took us out of Tavastia towards more adventures that evening. And still now, the spell cannot seem to be broken – there must be some addictive additives in this Beastmilk potion because I cannot seem to get enough – listening to them now my feet are eagerly tapping in anticipation of when they are going to get their next fix.