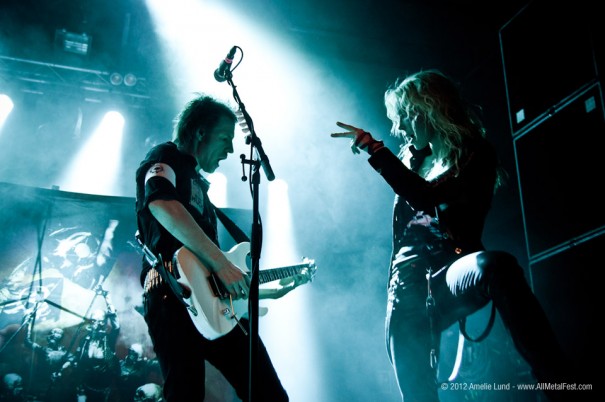 Arch Enemy‘s extensive European run in support of their Khaos Legions album had its final stop in Circus club, Helsinki.

Circus has only recently been taken into heavy use for bigger heavy metal concerts. It fills the void of a large club venue in Helsinki in a satisfactory manner; the club can hold approximately 1,500 attendees per show (that’s about two times the size of the legendary Tavastia club), but it’s not really optimally designed for a concert experience.

Arch Enemy was hopping from one city to another all by themselves on this leg of the tour, so the two support acts of the night were local. Omnium Gatherum and Profane Omen were both a good fit to open this show, both being some sort of up and coming metal embassadors of Finland. 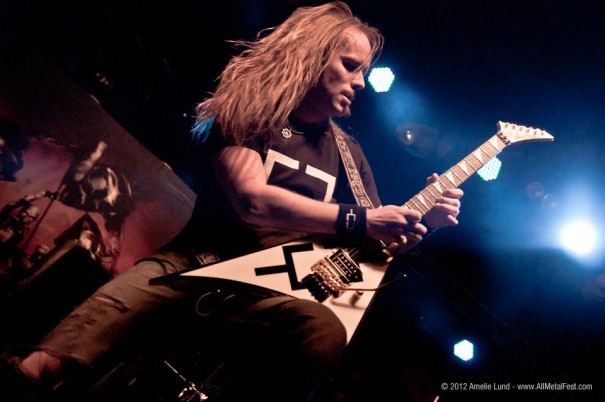 OG‘s fifth full-length effort New World Shadows hit #5 in the Finnish album chart upon its release, and the six-piece had all dressed in shirts featuring the album’s cover art. 6 out of 7 songs of the set were from that album, with only The Nail being included as the second song of the show from The Redshift disc. The band has survived a few key lineup changes and is still going strong, gradually building their fan base show by show, and tonight’s energetic set was certain to convert yet another few new fans into their boat. 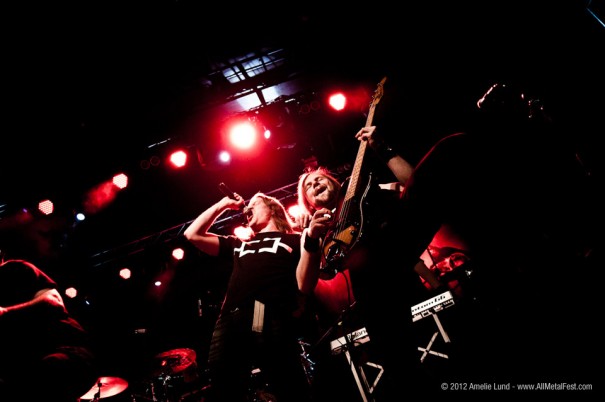 Just like Omnium Gatherum, Profane Omen is a hard-working metal patrol with a faithful following in Finland, but little success abroad to date. Perhaps the band’s upcoming Scandinavian support run with Amon Amarth will change this, as what Profane Omen may be lacking in catchy song writing, they certainly make up for in their fiery live performances. The band’s sound is not as Gothenburg-like as OG‘s – there’s no keyboards and a better comparison point would be Pantera or something similarly groovy. 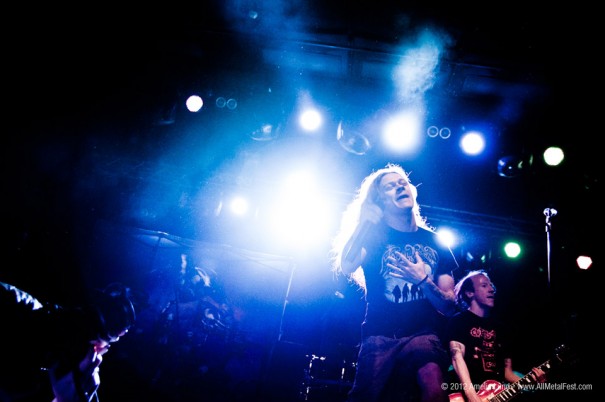 Jules Näveri is a tireless, A-class frontman handling both the clean and growling vocal duties well beyond industry standards. He led his bandmates and the crowd into a frenzy, starting with the band’s latest video track Wastehead, closely followed by Disconnected. 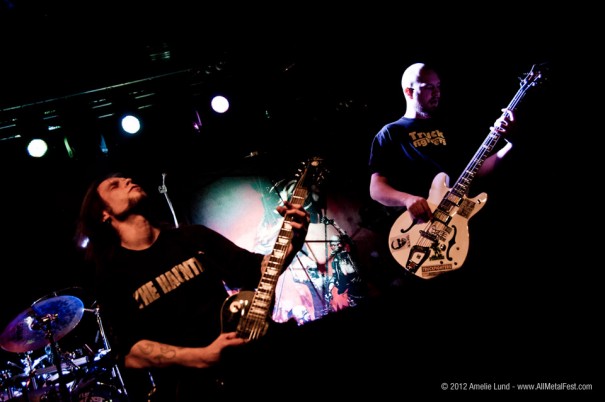 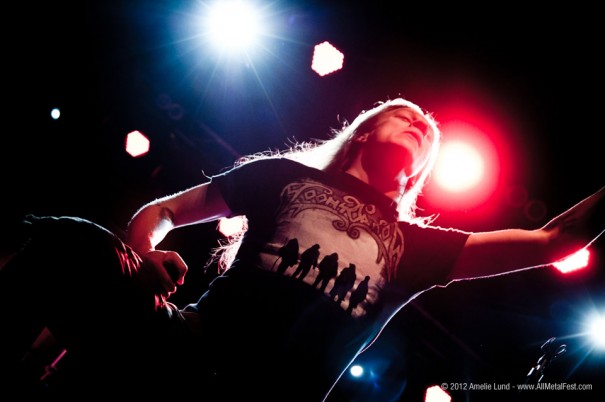 While Predator and Bound to Strive broke a few necks, God in a Bottle got some of the more enthusiastic fans join to sing the chorus. What Näveri described to be “perhaps the biggest show we’ve ever done” was an energetic and all-around entertaining performance from the Lahti-based rockers. 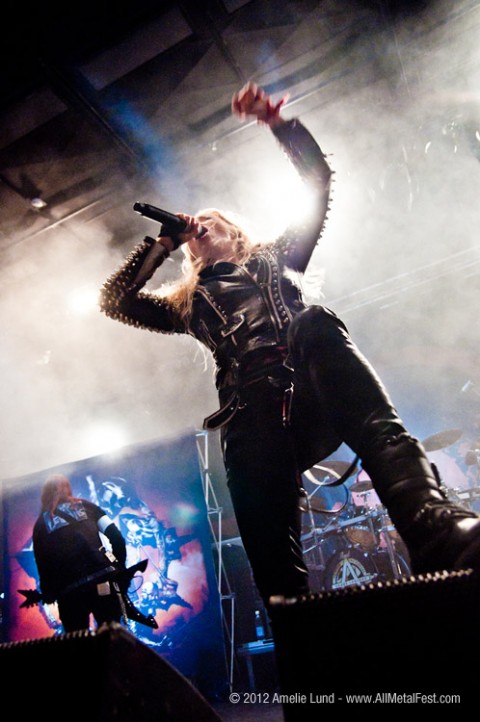 As Arch Enemy‘s early 21:30 showtime drew near, the floor level got more and more packed, but apparently the show was not even nearly sold out as the upper bar floor remained shut. 6 EUR beers were sold at the bars downstairs at a rather impressive rate for a Tuesday show in anticipation of the night’s main event.

Arch Enemy is one of those bands that always delivers, but never surprises. 15 minutes behind schedule, Yesterday is Dead and Gone started off the carefully crafted set that the band had honed closer to perfection night after night. The obvious hits Revolution Begins, Ravenous, Enemy Within and the like followed one another; Arch Enemy has a broad repertoire of quality songs that are competing for a spot in the band’s live set which makes the odds of hearing your personal favorites rather slim.

As usual, the band’s front mistress Angela Gossow was the center of the attention, sporting a spiked leather jacket and greeting the crowd with what often seemed like a scripted speech she had done the five nights before, too. Surprisingly enough neither Daniel Erlandssons drum solo or the guitar solos ala the Amott brothers seemed unnecessary as they were kept in moderate lengths, cutting out to the following tracks right when you started to feel like yawning. 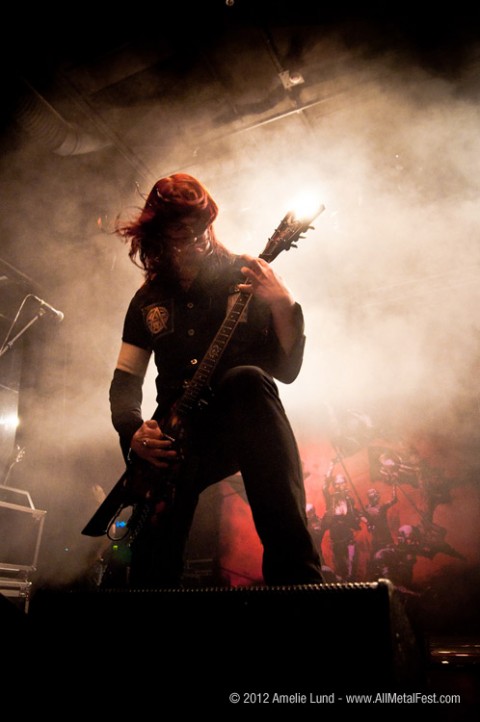 The main set’s ending song We Will Rise and the encore piece Nemesis still seemed to be the clear crowd favorites getting the biggest cheers before the band called it a night.

To be fair Arch Enemy‘s execution was flawless and the light show was immense, but having seen just moments ago two aspiring bands that have not had their final breakthrough just yet, it must be said that there are distinct differences between the performances of routined professionals and genuinely hungry bands that feel that they have something to prove. Nevertheless, the fans certainly got their money’s worth, as they left Circus behind and headed to the pitch black Helsinki night after the show. 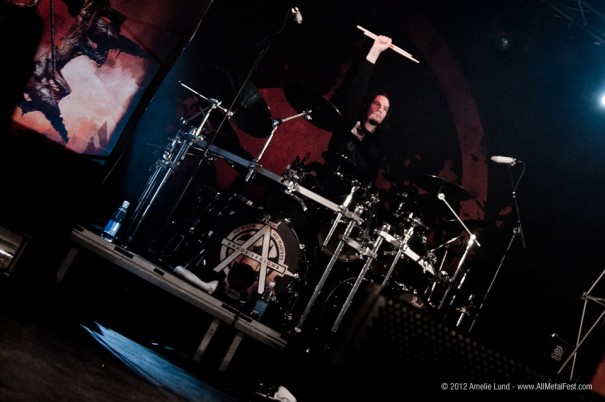